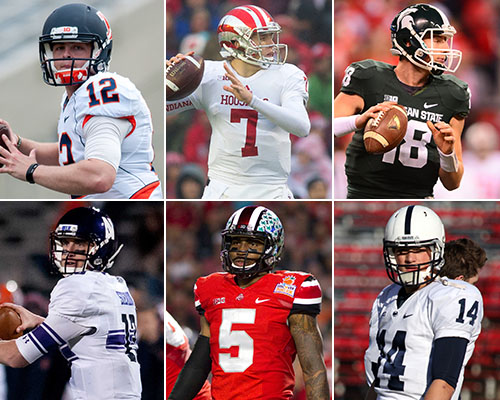 The Big Ten has featured plenty of great quarterbacks, including Drew Brees, Troy Smith and Russell Wilson, to name a few. But as good as these guys were, none of them were perfect in every area of the game.

This got me thinking, what would my perfect Big Ten quarterback look like? You know, a quarterback with the ideal arm strength, size, speed, accuracy, smarts and ability to perform in the clutch.

Arm strength: Christian Hackenberg, Penn State
Hackenberg has the look of a superstar, and he showed that during his freshman campaign last season. A mega-recruit coming out of high school, Hackenberg lived up to the hype, passing for 2,995 yards and 20 touchdowns in 2013. But of all his outstanding attributes, it's his arm strength that stands out the most. Hackenberg was phenomenal at throwing the deep ball, completing a pass of 30-plus yards in 10 of Penn State's 12 games last season. His top target on the deep ball, Allen Robinson, is now in the NFL with the Jacksonville Jaguars, which means that Hackenberg will need to find a new go-to wideout. With his skill-set and ability to make players around him better, that shouldn't be an issue.

Size: Nate Sudfeld, Indiana
One of the most important things scouts look at when evaluating the quarterback position is a player's size. At 6-5, 230 pounds, Sudfeld has exceptional height, weight and strength for the position. This allows him to see over the top of offensive and defensive linemen and connect with his receivers and tight ends over the middle. Sudfeld isn't much of a runner, but with that size, he is pretty tough to bring down on first contact.

Speed: Devin Gardner, Michigan
Gardner is one of the fastest, most elusive players in the Big Ten, regardless of position. When he gets into the open field, this guy is tough to track down, using his quickness and long strides to escape defenders. Gardner ran for 483 yards and 11 touchdowns last season, making him the top returning rusher on the Wolverines' roster. This is a guy who has already rushed for 20 scores in his college career… And he's a quarterback!

Accuracy: Wes Lunt, Illinois
Lunt has yet to throw a pass in an Illinois uniform, but the former Oklahoma State quarterback arrives to Champaign with plenty of hype. One reason for that is his accuracy, as Lunt completed 62 percent of his passes during his freshman year in Stillwater. Now, under the tutelage of Bill Cubit, who helped Nathan Scheelhaase run away with the completion percentage crown last season (66.7%; nearly six percent higher than his career average entering 2013), Lunt should be able to thrive in this Illinois offense.

Mind: Trevor Siemian, Northwestern
Sure, Siemian is the easy pick because he goes to Northwestern, one of the most prestigious academic institutions in the nation. However, if you watch him play, you begin to realize just how smart he is. In 542 career passes as the thrower of Northwestern's dual-threat quarterback duo, Siemian has been intercepted just 13 times. That's a credit to his knowledge of how important ball security is, especially when defenses knew he was in to put the ball in the air. While his passing yards and touchdowns may not be as glamorous as Miller, Hackenberg or Sudfeld, this is a guy who has a true understanding of the game.

Clutch: Connor Cook, Michigan State
Back before Connor Cook was Connor Cook, he came off the bench to spark the offense and lead Michigan State to victory in the 2012 Buffalo Wild Wings Bowl. The effort didn't result in the starting gig to open 2013, but Cook eventually claimed the job and never looked back en route to directing the Spartans to an 8-0 Big Ten clip — all eight wins coming by double figures. Then, in the two biggest games of his life, he won the Big Ten Championship Game MVP and Rose Bowl Game Offensive MVP. Yeah, this guy knows how to perform under pressure.