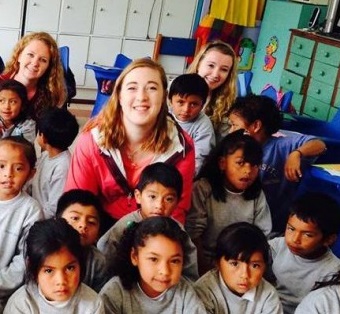 ?I kind of fell in love with volunteering at an early age," said Hillary Nolting. "That?s what made me want to continue doing it in my college career.?

Nolting, 21, grew up in Batesville, Ind. Living in a small Midwest town, the Indiana rising senior had access to volunteer opportunities throughout middle school and high school. She worked in soup kitchens and homeless shelters, and she took part in food drives and blood drives.

When Nolting, a rising senior, got to the big state school in Bloomington, she took an interest in new community service activities.

?The opportunities I had before college were not on the major scale as here at IU,? Nolting said.

As a sophomore, Nolting became part of IU?s Alternative Break Program during, a group that provides students with community service trips over periods when class is not in session. She worked her way up to become an ABP board member. This past spring break, Nolting led a trip to Quito, Ecuador, where she taught English and American culture and helped renovate a school.  She is the incoming president of ABP for 2014-2015.

Nolting previously went on an ABP trip to Ghana during her sophomore year Christmas break. In Ghana, she worked in a rehabilitation center that housed 49 formerly enslaved children.

?We were their contact for the week,? she says. ?There?s 49 of them and only three House Moms. They don?t get a lot of love and contact.?

After her trip to Africa, Nolting went through an application and interview process to become a trip leader for spring break 2014. She was selected and slotted to work with UBELONG, an international volunteering and learning organization. UBELONG works with corporations and universities, including Big Ten institutions Indiana, Michigan, Wisconsin and Maryland.

Through UBELONG, Nolting had site options in Central America, South America, Africa, Asia and other locations. Nolting wanted to stay in the western hemisphere and work with children. She found her destination in Quito, Ecuador at a school that could house ten IU students and had a child education grassroots program.

In March, Nolting led her group of nine other students to Quito. No adults, just IU students, with eight of the ten hailing from the Kelley School of Business, the others being a physical therapy and a journalism major. The group worked at a public school with students grades K-7 (eighth grade soon to be added). At the school, each grade has an English class once a week. Nolting and her classmates awaited the students each rotation.

The English teacher instructed the Indiana students to balance English and American culture. In Ecuador, both areas of study are limited, but both could change the lives of the students.

?She really wanted to show how much English could open doors for them. A lot of them think they don?t need English, so she wanted them to know English is important,? Nolting says. ?We also showed how things are different in American culture than in Ecuador.?

Nolting and the Indiana students also pitched in with some renovations. On the top of the school there is a garden, which had no suitable fence when the Nolting and her classmates arrived. The Hoosiers helped construct a wall around the garden to make the area a safe space for the students to play.

Nolting?s crew featured a high amount of freshmen, which meant much of the Alternative Break Program atmosphere was an introduction. She was happy to spread her love of volunteering with new faces.

?I think it?s important as people who attend higher education to realize that?s a privilege and then to use the higher education for opportunities to give back,? she says. ?It?s the core of who I am and I think it make your education more valuable.?

Nolting notes the Ecuadorian teachers and students were interested in learning what drove the Indiana students to give up their spring break for a service trip. She said they embraced the Americans and their relationship is not ending soon.

?I?m still in contact with the English teacher and a few of the other teachers. We Facebook now and then and e-mail back and forth. That?s how I am with the people I worked with in Ghana as well. You kind of create these lifelong bonds after we spend a week together,? Nolting says.

Nolting is only building off of her trip leader expedition in Ecuador. This summer, she is an intern for PricewaterhouseCoopers? risk assurance practice in Indianapolis. Nolting will also take part in the company?s Project Belize. Project Belize sends interns, partners, principals and other staff members in three waves to Belize for volunteer work. Nolting will make her trip to Belize City in the first week of July. She will teach financial literacy and entrepreneurship to students in fourth, fifth and sixth grade.

?I?ll focus on basic stuff teenagers should know about saving money and budgeting,? she says.

As for her work with ABP, Nolting is set to make strides with her term as president. She says there will be nine to ten large-scale trips next year, three of which will be international. Although she will not lead any trips, Nolting will be involved in the organization process and go on a trip. She is creating more weekend service trips to help get more Indiana students involved. These trips feature locations within five hours of Bloomington and do not last more than one or two days. Possible destinations include Indianapolis, Ind., Louisville, Ky., Lexington, Ky., St. Louis, Mo., Chicago, Cincinnati, Ohio and Columbus, Ohio, with Nolting hoping to reach five to six weekend trips.

Nolting also hopes to expand relationships with volunteer programs with other schools that can find volunteer opportunities in Bloomington.

Shortly before Nolting?s trip, the previous ABP president, Kristyn Crawford led a trip to Cusco, Peru, volunteering the caring for disabilities and construction projects. Indiana?s Alternative Break Program is one of the most active undergraduate volunteer organizations in the nation. It appears the program is expanding under Crawford and Nolting?s leadership, with high expectations ahead.