NFL.com lists 1995 Huskers as greatest of all time 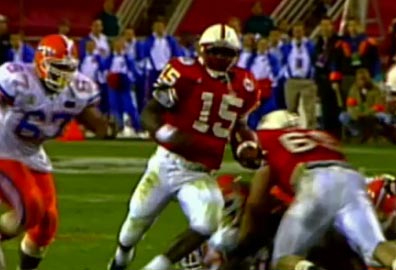 Ohio State coach Urban Meyer made news this past weekend when he told a group of youth football campers over the weekend that his 2008 Florida team was the greatest team in college football history. The debate is one for the ages, as there are plenty of acceptable answers to that question.

NFL.com recently released a top-five list, in which it has the 1995 Nebraska Cornhuskers as the greatest college football team of all time.

Here is a look at NFL.com's rankings.

NFL.com's Chase Goodbread on the 1995 Huskers: "In this context, why not start with the team best remembered for shredding Florida to win it all? Tommie Frazier's dismantling of the Gators' defense couldn't have been more thorough in a 62-24 thrashing of UF in the Fiesta Bowl for the national title. The Cornhuskers went 12-0 and weren't held to less than 35 points the entire season, destroying every opponent on the schedule with an unbeatable triple-option offense."

1997 Michigan Wolverines: Led by Heisman Trophy winner Charles Woodson, the 1997 Wolverines will be remembered for featuring one of the greatest defenses in college football history. This team held opponents to an average of just 9.5 points per game en route to a national title.

1968 Ohio State Buckeyes: Woody Hayes' 1968 OSU team defeated rival Michigan 50-14, and then went on to top USC in the Rose Bowl en route to an unbeaten season and a national title win.

1994 Penn State Nittany Lions: Considered one of the greatest teams in college football history to not win a championship, Penn State posted a perfect 12-0 record, including a win over Oregon in the Rose Bowl. The Nittany Lions finished No. 2 in the nation behind Nebraska.

*1994 Nebraska Cornhuskers: Just like in 1995, Frazier quarterbacked this team to a perfect season and a consensus national championship. Tom Osborne's triple-option offense was near impossible to stop as the Huskers outscored their opponents by a mark of 459-162.

*1971 Nebraska Cornhuskers: This group posted a perfect 13-0 record, including a 38-6 walloping of Alabama in the Orange Bowl. The Huskers featured a dominant defensive unit, holding opponents to just 8.2 points per game.

* Nebraska did not play in the Big Ten during this period of time.