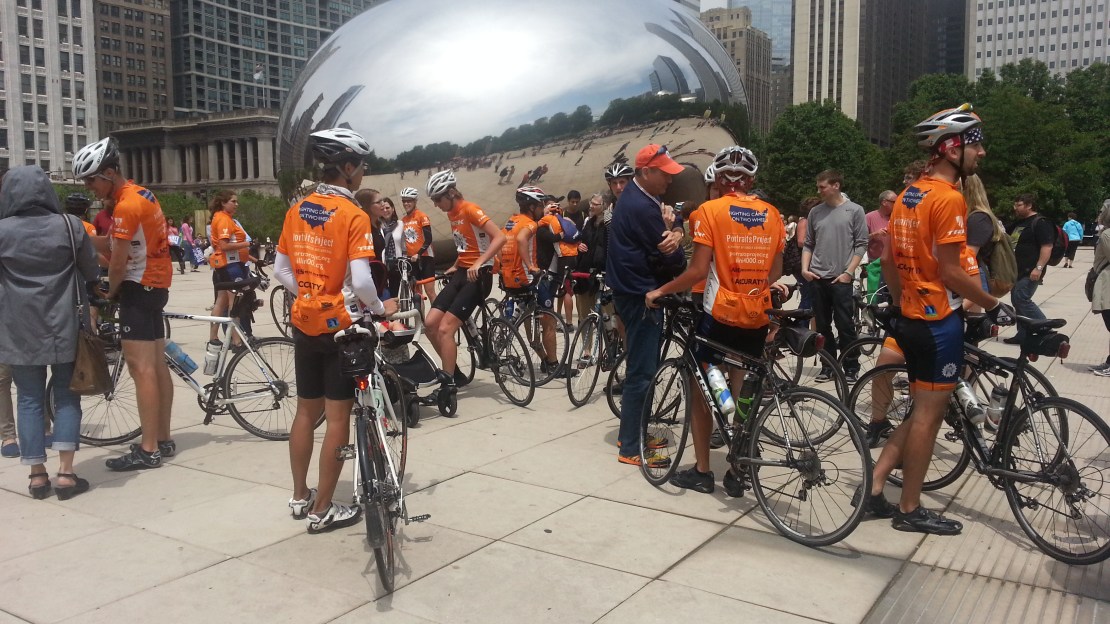 ?I never thought I would do this ride, but it?s something I had to be a part of.?

Those words, from Ryan Newquist, echoed through the team of 20 riders as the orange parade of bikes approached Chicago?s Millennium Park on Wednesday. Newquist is part of Illini 4000, a group of students and recent graduates of the University of Illinois who will ride roughly 4,500 miles across the United States to raise money for cancer research. Newquist?s family has been impacted by cancer, which led to him signing up for this summer?s ride.

?The more I learned the more I realized that this is an amazing organization,? he said. ?Not only do I get to see the entire United States on a bike, but I also get to help raise money for cancer research.?

Newquist will be back on campus in Champaign-Urbana this fall, but a few of the other riders in the group recently graduated. Kevin Daliva accepted his diploma in May, and this ride has become very personal for him.

?A few of my relatives have been affected by cancer,? said Daliva. ?Last December my uncle was diagnosed. He passed away 10 days into the ride. I?m riding for him.?

Each day of the ride is dedicated to someone dealing with cancer. The first day of the trip was dedicated to the grandfather of Kathleen Mammoser, who was diagnosed with liver cancer the day before his granddaughter began the trek.

?The first day, in Central Park in New York City, was dedicated to her grandfather,? said Tom Mammoser, Kathleen?s father. ?That was something that made it more personal for her.? Tom Mammoser was one of many family members who greeted the riders as they arrived in Chicago. Photos were taken, but the hugs that were exchanged showed the love between parents and the tired riders. Kathleen Mammoser, like Daliva, just graduated.

?I thought this was a great way for her to culminate her college experience,? Tom said. ?What a great opportunity for her and we?re so proud that she made the choice to do it!?

?By nature, Kathleen is pretty comfortable being in the background but she said she wanted to do something outside the box,? her father continued. ?This is outside the truck that brings the box.?

One doesn?t simply decide to ride a bike across the United States, however.

Students sign up for the ride in the fall and each is required to not only get into shape for the ride, but to raise at least $3,500 as well.

?We started doing endurance exercises in October,? said Newquist. ?When Spring Break arrived we started doing practice rides, increasing by 15 miles each week. So far, the training that we did has paid off.?

?We hit the Appalachians Mountains in the first week of our ride,? he said. ?Being part of a team helps us push each other. If you see someone struggling up the mountain like you?re struggling, it?s a lot better than doing it yourself.?

Amazingly, most of the riders didn?t know each other before training for the trip, and only two of the riders - Ride Leaders David Walder and Connor Ramsey - have been on the trip before.

With little experience and less knowledge of others, the group set forth on a fundraising and training regimen that is now a work-in-progress. To date, the team has raised more than $87,000 and is three full weeks into their adventure.

?We get about two phone calls a week, and some text messages and an occasional action shot,? he said. ?But we check the Illini 4000 blog and website on a daily basis. Every day there?s a post about that day?s activities.?