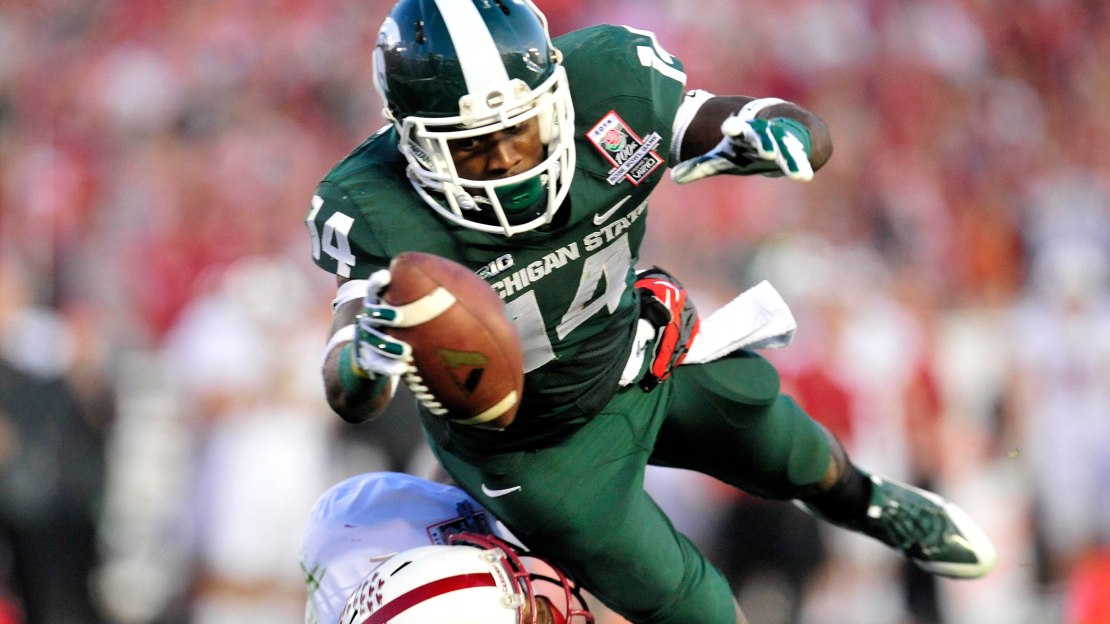 The gang at Athlonsports.com cranks out some quality stuff. You?ll wanna check out the site?s 10 must-see Big Ten non-conference games. At the top of the list? Michigan State at Oregon. No shock there. If the Spartans can leave Eugene with a win, they may have a good shot to run the table.

The first five games are nice ones: LSU-Wisconsin (in Houston); Michigan at Notre Dame; Miami at Nebraska; Virginia Tech at Ohio state. But after that, the quality drops quite a bit. Iowa at Pitt at No. 6? Yep. Oh, well. Enjoy the first five.

The priciest student season football ticket in the Big Ten? It?s at Michigan, which charges $295.

After selling roughly 19,000 student season football tickets in 2013, Michigan is expecting that number to dip toward roughly 13,000 for the 2014 season, according to Mlive.com. Why? Michigan A.D. Dave Brandon addressed the issue.

"I think there's a bit of a trend going on there, as I talk to my colleagues. But it is always a concern. We want a robust, filled student section. Our student section tends to go up and down from year to year. Clearly it's down this year versus last year," Brandon said. "Our home schedule, we don't have any of our big rivalry games (this year), that could have an impact. Coming off a 7-6 season, that could have an impact.

"Next year, we've got BYU coming and Ohio (State) coming back, Michigan State's finally coming back to Michigan Stadium. I think you have to look at these things a little bit longer than a one-year situation."

True. But attendance is lagging at many schools, so this is a concern and is why it?s vital for schools to enhance the in-stadium experience. People can stay at home and have a GREAT experience watching in HD on big screens with WIFI connectivity.

There is a lot to like about the 2014 Penn State football squad. But one area of concern is the offensive line. The unit may have just one returning starter in left tackle Donovan Smith if guard Miles Diffenbach is unable to return from a spring knee injury.

Bob Asmussen of the Champaign News-Gazette has a nice piece on former Illinois tight end Josh Whitman, who is the new A.D. at Washington University in St. Louis. He was A.D. at Wisconsin-LaCrosse.

This guy one day will be a top A.D. at a FBS school. Mark my word.

There are pros and cons. For a school like NU that isn?t flush with cash, scheduling FCS foes makes financial sense, as they are cheaper than FBS foes. Yes, FCS schools hurt strength of schedule. But, honestly, if NU goes 12-0 with a win vs. a FCS school, I bet is still would have a good shot to make a four-team playoff.

Chris Emma of CBS Chicago spent a day recently with Illinois football coach Tim Beckman. I can only assume Emma is now full of catchy slogans and is sporting a wristband.

I almost fell out of my chair when I read this: Northwestern?s Welsh-Ryan Arena is going to get a face-lift. Talk about long overdue. But, just adding new video boards falls short of making this truly a Big Ten quality arena.

This venue is an embarrassment. While adding new video boards is good, I think a new venue is needed. The school should build a 10-12,000 seat arena similar to what Saint Louis University did a few years ago. Oh, well. At least this is something to help rising coach Chris Collins? push to make NU hoops relevant.

The great Graham Couch of Lansing State Journal has been conducting a countdown of the Top 50 hoops players in Michigan State annals. The countdown is up to No. 32, Eric Snow.

This will be nice for MSU fans: The basketball team will open the season vs. Navy in Annapolis. The Michigan State football team is scheduled to play at Maryland at 8 p.m. the following day, approximately 30 minutes away.

Bad deal for Maryland: touted incoming 7-foot center Trayvon Reed will be out 8-12 weeks with a fractured ankle.

Reed was expected to make an immediate impact on the interior, as Maryland lost two of its most productive big men when center Shaquille Cleare and forward Charles Mitchell transferred.