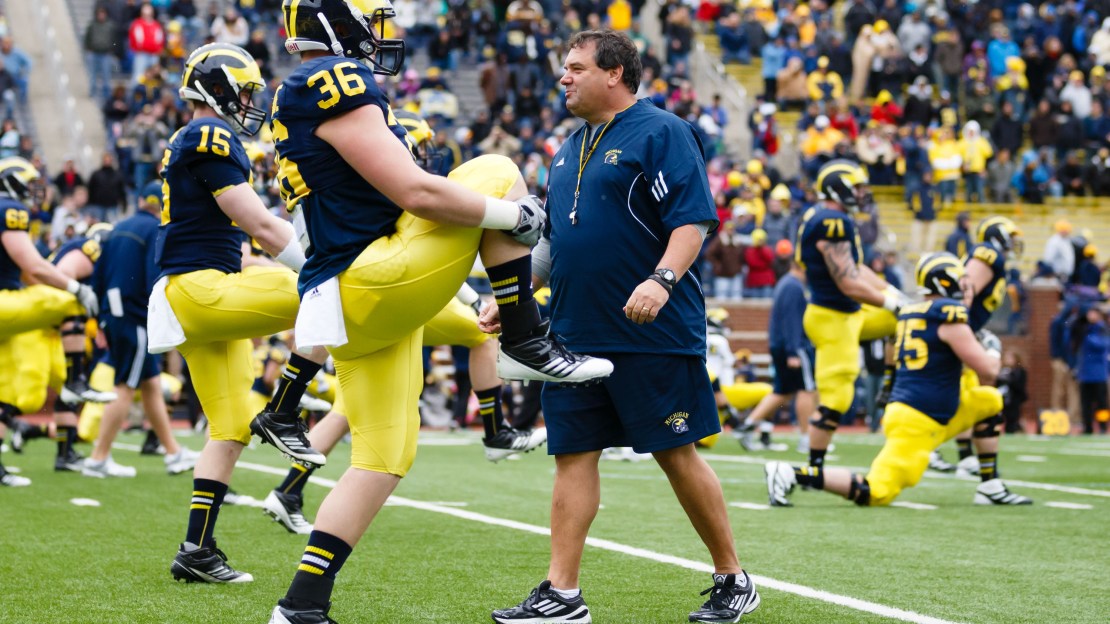 I can?t wait to see Michigan freshman CB Jabrill Peppers, who brings a fat scrapbook to Ann Arbor. And it sounds like the five-star recruit also may run track after he won the 100- and 200-meter dashes at New Jersey's high school "Meet of Champions" last week. According to the Star-Ledger, Peppers is the second boy in meet history to capture both sprint titles in back-to-back seasons.

I?m not gonna type it, but I?ll type it: Could Peppers be another Charles Woodson?

The last two summers, Brady Hoke has taken his seniors for NAVY SEAL training. But, that won?t happen in 2014.

"To me, it was just something (that) had run its course a little bit, and maybe (created) some entitlement (for the older players)," Hoke said last week to Mlive.com. "We need to stay here, and stay together. I think guys just thought that was part of being a senior. They've got to earn it."

The story points out that Hoke felt ?overall veteran entitlement from the 2013 squad somewhat fractured the team, and created some overall chemistry issues that ultimately could not be fixed.?

Interesting stuff. I give Hoke credit from trying to get things right.

Ohio State recently had a one-day instructional camp. Cleveland.com has five things you need to know about it.

Chief among the observations: Vonn Bell is healthy. Good news. He could be a future star in the secondary. And this is a defensive backfield that has something to prove this fall.

On the subject of the Buckeyes, the Cleveland.com series that?s revisiting the 2011 tattoo scandal at Ohio State takes a look at Terrelle Pryor. He was a key figure in the scandal and was disassociated from the program for five years because of it.

"Obviously, I can't go back for another two years or so," Pryor said. "I love Ohio State. You know, I learned a lot and I had a lot of fun there and I met a lot of friends there. I love the place. It's unfortunate that I let the fans down for making the dumb mistake I made when I was 18. But you know, things happen and you learn from them, and I think the reason it happened to me is for other people to learn, and I'll take that any day."

Greed ? selfishness ? entitlement ? those are three things that pop into my mind when I think of this entire scandal that proved to be so costly to Ohio State. It?s sad, really.

Northwestern fans should enjoy these new video boards at Ryan Field in the fall.

The struggles of the Illinois defense over the past two seasons are well-documented. One of the biggest areas of deficiency has been interceptions, especially from the cornerbacks. In each of the last two seasons, Illini corners have notched just one pick. One. That?s it.

?Pressure makes diamonds,? V?Angelo Bentley said. ?I don?t feel it?s pressure as much as we?ve got to perform. We came here for a reason. Everybody can perform at this level. You?ve just got to go out and do it.?

Speaking of the Illini, they came in at No. 68 in Athlon?s preseason poll. Sounds about right. The offense will be just fine. Any hopes for a big jump in record will rest with the defense. Any playmakers in the front seven?

Football games at Rutgers could have a ?Disney World? experience, according to A.D. Julie Hermann.

"What I can promise you, one of the things we're working on most, is when you come see us at ball games, starting with High Point Solutions Stadium, you have a world-class, Disney World experience," Hermann said. "That's important to us."

That?s interesting. I never have heard of a school wanting such an experience. But, what the heck. Rutgers seemingly knows it has a ways to go in many aspects to become a Big Ten quality athletic department. And knowing your issues is the first step in any recovery. It?ll be fascinating to see where the Scarlet Knights are in three to five years.

This is interesting: Wisconsin football recently got some commitments from Texas prospects. The last time the Badgers signed a kid from the Lone Star State? It was 2008. And they were three good ones in Marcus Cromartie, Devin Smith and Shelton Johnson.

Nice pick up for Tom Izzo and Michigan State, which added West Virginia transfer Eron Harris. He?s a lithe wing player who will add some scoring punch when he is eligible to play in 2015-16. Not a bad landing place for a guy who had few high-major offers coming out of high school in Indianapolis.

In two seasons in Morgantown, Harris showed he could shoot and score. He shot 43.8 percent last season and 42.2 percent from three-point land while averaging 17.2 points. Harris shot 41 percent as a freshman.