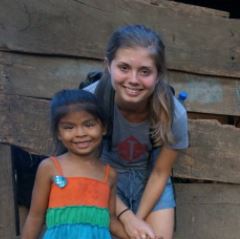 Katie Landgrebe from the Northwestern women?s soccer team traveled to Nicaragua for a week in May to work in one of OneSight?s (OneSight.org) five-day global clinics. Along with the in-depth community knowledge and relationships of Amigos for Christ (AmigosforChrist.org) based in Chinandega, Nicaragua, the OneSight team provided eyecare to almost 3,000 patients from the northern region of the country.

Katie had the opportunity to do field work with OneSight?s communications team and to interact with the many communities that came to receive world-class vision care at the clinic. She received this opportunity as one of five recipients of the Irving Kabiller Memorial Award for Excellence in Character, Commitment and Community through the NU for Life program. If someone is squinting, the assumption we quickly make in the United States is that they need to have their eyes examined. But in Nicaragua, it is not so clear. It could be that they are trying to protect their eyes from the ever-present dirt in the air. Or that the smoke from the open-air stove they use to cook is starting to make their eyes sting. Or it might be that the pollution from the fires used to incinerate waste has permeated not just their noses but their vision too. Most likely, they are squinting against the Nicaraguan sun that shines for 300 days out of the year.

The vision of OneSight, and of anyone who hopes for large-scale renewal of people and countries, is that everyone deserves the ability to see the beauty of their world and the realization of their dreams. I had the opportunity to travel with the organization to their clinic in Chinandega, Nicaragua in May of this year. Their global operation involves clinics across the United States and world. They have permanent clinics in New York Public Schools and across the globe in Farafenni, the Gambia, to name two. They were returning to Nicaragua after an extremely successful clinic a year ago, and I had the opportunity to jump in on their clinic triage and storytelling teams.

There is so much worth seeing in Nicaragua: sloping agricultural fields falling away from active and dormant volcanoes that rise in blackness to blue skies, herds of cattle followed by their caretaker astride a horse that clops slowly behind the swinging tails, canopied vistas with dappled light falling on dirt patches where children sling marbles in a game that can last for hours. And like any country, especially one where almost half of the population lives below the poverty line, there is much that many prefer to leave unseen: people trekking a half mile to draw water from a contaminated well, trash rustling along the sides of scenic roads, school-age children working in fields during the middle of the day. It was in this setting that the weeklong clinic took place.

Jorleny, a stick-thin 8-year-old, who sat in the OneSight clinic queue on our second day of operation, was squinting as she surveyed the room. Huddled against her mother, she took in the controlled chaos around her and crossed and uncrossed her legs that dangled from the plastic chair she rested on. Later, one of the doctors explained to me that Jorleny?s poor vision was due to a condition called nystagmus, which is characterized by pupils that seem to constantly vibrate, even when the person is trying to focus their vision. Looking in Jorleny?s wide eyes, there was a perpetual dance happening. As Dr. Jason Singh, the executive director of OneSight explained, she is ?constantly trying to find her best vision.?

It is hard to write about your own experiences when it feels like there are many other, much better stories running alongside your own. After traveling to Nicaragua, I want to tell so much; but mostly, I want to go back. I think that is how a place makes us feel when it captures a part of us and starts to burrow inside our minds and hearts. I?ve felt this way many times before, about places big and small, and wonder if other people feel stretched, like they start loving one place only to return to, or travel to another that does the same. They must.

I want to tell about Maria, my friend from a village called La Chuscada, who smiled at me from her doorway and then told me about her journey from El Salvador to Costa Rica and finally to Nicaragua when she married her husband. Then I would tell about her husband, Don Sebastian, who helped lead the project to put in a water line that would supply his community with clean water piped straight to their homes, something considered a luxury by many in the country. And I couldn?t tell their story without mentioning the organization, Amigos for Christ, who provided the in-depth knowledge of the country and language for the OneSight clinic. About how their employees are so embedded and invested in whole-scale change in communities around Chinandega that they knew the names of most of the people who came through our clinic.

I might tell about climbing Cerro Negro, the volcano that erupted as recently as 1999, and how at the top, I burrowed my hand in the ash and dirt and felt heat through the rock. I want to tell about how I felt life and danger coming from a spot in the earth. And maybe I could speak of how applying all my Spanish instruction in a context where it was the necessary language, I felt deficient and empowered all at once. I would tell of the language of smiles and touch, and also of how my world became a little more nuanced as new sounds left my mouth.

For now, I?ve found that one story is often best, one simple, transformative narrative; And I definitely have one of those.

A second grader, Jorleny told me that at school it is hard-most of the time, impossible-to see the chalkboard. Reading close up is difficult too, because that constant dance makes it a struggle to focus her eyes. With her condition, glasses would only improve her eyesight by a factor of two, doubling the distance she can see. But it would be the first time in Jorleny?s life that she could clearly see those extra meters in front of her.

As she waited for her glasses, ones that she had selected for herself and that would be manufactured on-site, she did the same fidgeting that had characterized her initial waiting. I like to think that she was thinking about the dignity in getting to choose her own frames, about how her eyes lit up when she settled on the pair she wanted. That maybe she was thinking about all the places she would see more clearly now, like how the fruit hanging from the trees in her village would no longer be just shapes, but crisply defined circles of color. It could be that she just thought of how she would be able to see her mother, who had stayed by her side the whole day, from further away as she walked home from school.

But she?s only eight, and was probably thinking about how she couldn?t wait to go play with her friends, so I had those thoughts for her.

When the glasses came out, they were pink and tiny and sat in a blue tray. Her mother was smiling before they were even lifted onto her face. Jorleny stood up from her chair and swung her arms as the glasses were placed on her nose, her eyes appearing inside the pink frames. I don?t presume to know what Jorleny thought, or that her vision suddenly became clear, but for a moment she spoke in a language we could all understand. It was joy.

This story was originally published on NUSports.com.