Get your week started off with today's Big Ten links 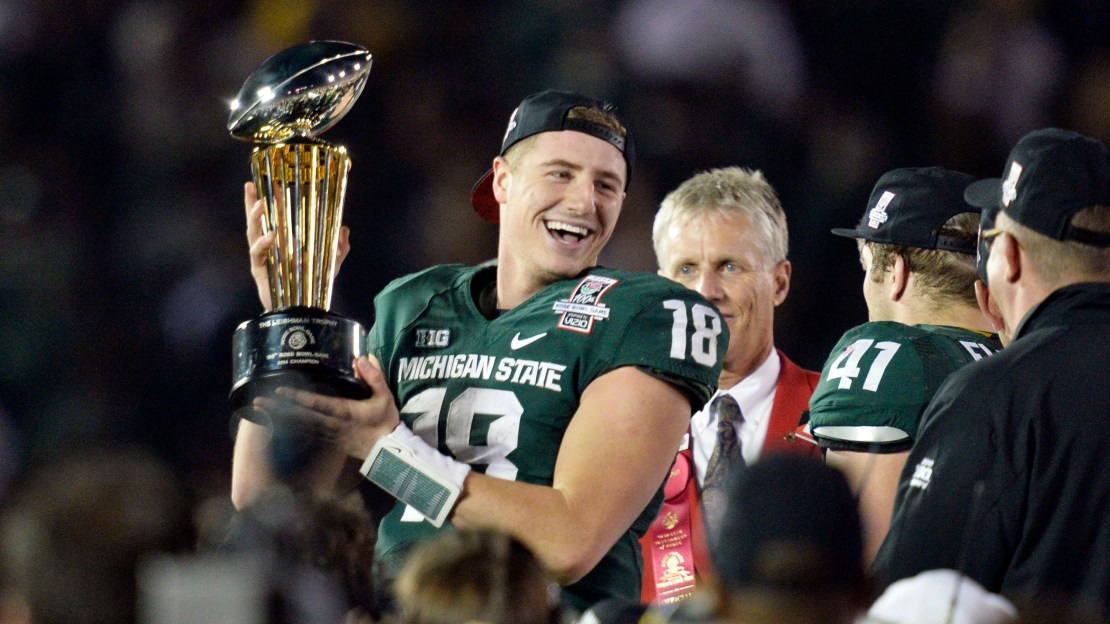 Who is the Big Ten?s best quarterback? According to Bucky Brooks of NFL.com, it?s Michigan State?s Connor Cook, who is No. 6 on the former scout's preseason "Quarterback Tracker." My pick? Penn State?s Christian Hackenberg, a classic passer who embodies everything that a big-time quarterback should be.

"Evaluators are keeping a close eye on Cook after the Michigan State standout put together a pair of impressive performances in the Big Ten Championship Game and Rose Bowl.

He displayed the poise, moxie and resiliency to make big plays in a high-pressure environment with the game on the line in those contests. Additionally, Cook showcased the pocket-passing skills and arm strength to thrive in an offense that places the burden on the quarterback to create plays in the passing game. With Michigan State expected to open it up in 2014, Cook could make a major move up the charts this season."

Remember the hub-bub that Penn State?s James Franklin caused among SEC coaches by saying his staff was going to help run a football camp at Georgia State? He?s miffed by the angst his decision caused. And, frankly, so I am.

?As you guys know we?re going to do everything in our power to build this program to where everybody wants it to be and we take great pride in that,? Franklin told 247 Sports.com. ?We?re going to follow the rules, but use the rules as well.?

Michigan landed a big-time transfer with USC running back Ty Isaac joining the squad. But, as Nick Baumgardner of Mlive.com points out, hopes of the 6-3, 225-pound Isaac gaining immediate eligibility appear slim.

Isaac says he wants to be closer to his ailing mother in Shorewood, Ill. But he?ll still be a good four-hour drive from Ann Arbor. If Isaac REALLY wanted to be closer to home, he could have gone to, says, Illinois. So, what was more important to him: Being closer to mom or going to a top football school? Don?t think this will be rubber stamped by the NCAA. So, plan on sitting out 2014, Isaac.

Bill Livingston of the Cleveland Plain-Dealer has an interesting look at the many slips of the lip by former Ohio State president E. Gordon Gee. It seems Livingston is as miffed as I was upon hearing Gee?s latest, when he said ?I think everyone won? in assessing the aftermath of the Buckeyes tattoo scandal. Just amazing. I?m still shaking my head at that one.

Purdue has talked for a while about developing a better way to use the south end zone of Ross-Ade Stadium. Well, it looks like things are moving in that direction with the removal of most of the bleacher seats.

I have seen some neat artist renderings in recent years of some ideas for the area. Among other things, I?d like to see a train track that would allow for a Boilermaker Express to travel on. Make it a fun area!

When running back Malin Jones signed with Northwestern in 2012, there was much rejoicing in Evanston. Alas, his career never has gotten on track and he is transferring.

Speaking of Northwestern, it will stop selling jerseys of current players, according to ESPN.

NU issued this statement on the subject: ?The only pre-made jerseys we will sell this season will have #51 on them. Blanks will still be available to purchase and customize as fans see fit, as they always have. This was in discussions well before the NLRB situation.?

In case you have forgotten, Wildcats coach Pat Fitzgerald wore No. 51. I?d buy one of those jerseys!

The NBA draft is inching closer. With that, here?s another mock draft. Who will be the first Big Ten player off the board? Could it be Michigan State?s Adreian Payne?

Illinois? Tracy Abrams didn?t leave Illini fans with good impressions to end last season, missing a horrible three-pointer in a NIT loss to Clemson and missing a potential game-winning shot vs. Michigan in the Big Ten tourney. But, Abrams is fueled by the memories and criticism.

?Those shots, it was hard going through that and experiencing that as a player because you know we were a game or two away from the (NCAA) tournament and knowing if I make one more shot, we?re there,? Abrams said. ?I had to be real strong-minded about it. I?m not going to lie and say it went away just like that. I know people criticize a lot.?

Illinois will return a veteran team that has the chance for big things next season. And Abrams will need to play a big role.

Good news for Minnesota: The athletic department turned a profit.