Best of Week 5: How does Big Ten play sound? 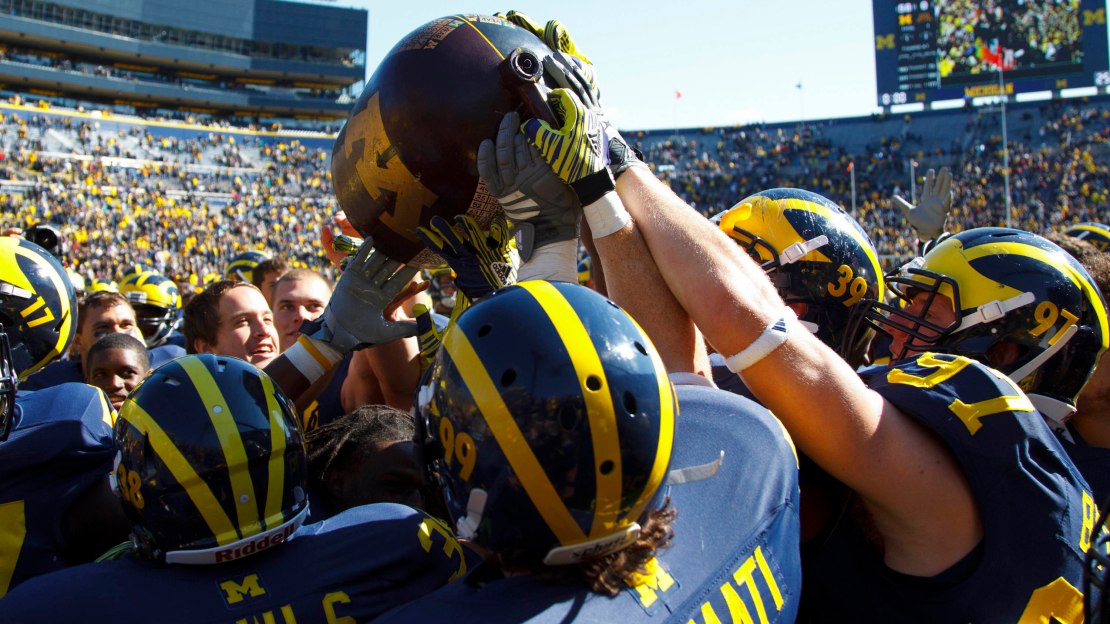 Every school is in action this Saturday, with a mix of Big Ten and non-conference action. There are five league games and four non-league clashes. None of the games stand out or look all that notable, but there could be some hidden gems. Here?s a look at the Best of Week 5.

Best storyline: We have a trophy battle, as Minnesota travels to Ann Arbor to play for the Little Brown Jug. Is there a cooler trophy in all of sports?

Game of the week: Minnesota at Michigan. This is a tale of programs that seemingly are trending in opposite directions. The Wolverines have dominated this series, going 39-3 in the last 42 meetings. The Golden Gophers? lone wins in that stretch have come in 1977, 1986 and 2005. Still, Minnesota is a program on the rise under Jerry Kill and is coming off consecutive bowl trips. Conversely, Michigan is struggling under Brady Hoke, coming off a disappointing 7-6 season that has some wondering about the direction of a program that has seen its win total drop each of the last three seasons.

Top quarterback matchup: Northwestern's Trevor Siemian vs. Penn State's Christian Hackenberg. This one isn't bad at all. Siemian takes over for departed Kain Colter, bringing more of a passing dimension to the Wildcat offense. Siemian also brings experience to the table, so he?ll be ready to roll and has some good skill around him. Hackenberg is coming off a sensational debut and is touted by some as the top pro-style quarterback in the nation despite being just a sophomore.

Best coordinator battle: Illinois offensive coordinator Bill Cubit vs. Nebraska defensive coordinator John Papuchis. Cubit worked a minor miracle with the Illini offense last season. For his next act, he?ll fold in a new quarterback and look to enhance the running game. Don?t bet against the wily Cubit making this a formidable attack once again. Papuchis will have a defense that teems with potential and talent, especially across the front seven.

Upset alert: Minnesota at Michigan. The Gophers may be able to ambush the Wolverines, especially if Michigan gets off to a rough start to the season. Jerry Kill continues to look for a signature road win in his tenure. This certainly would be it. A key for Michigan will be to show that its offense can run the ball to establish play-action. If the front struggles to get a push vs. what has been an underrated Golden Gophers defense, it could be a long day for the Wolverines.

Week 5 nuggets: Maryland takes the lid off of its Big Ten experience with its first conference game, traveling to Indiana … Urban Meyer coaches against his alma mater Cincinnati … Tulane won?t be a pushover for Rutgers, coming off a 7-6 season that included a bowl game. But Rutgers should have more talent than Tulane. The Scarlet Knights are 4-2 all-time vs. the Green Wave.