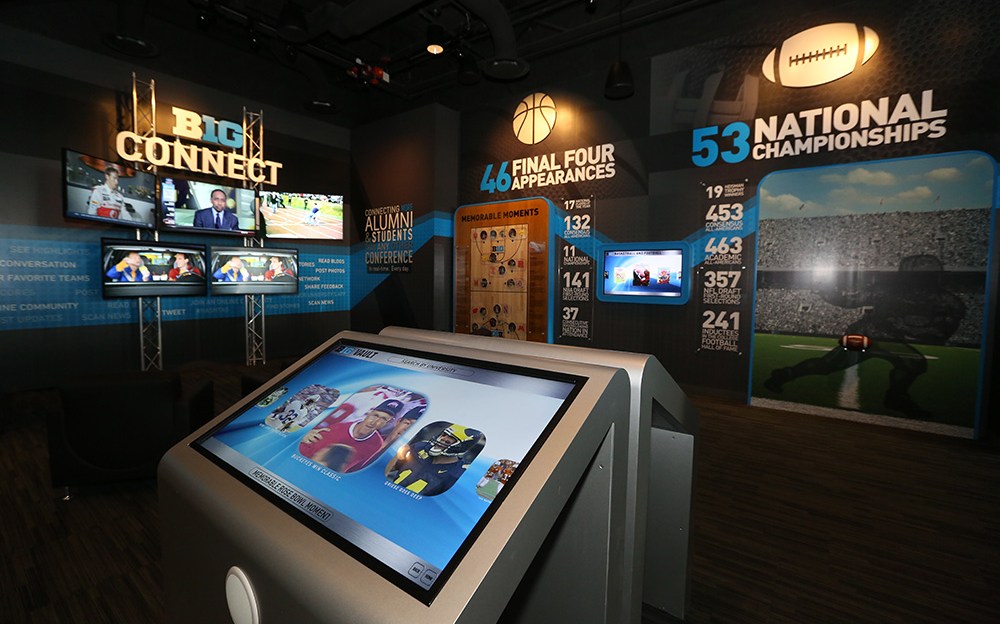 The Big Ten Experience, an interactive digital museum located at the conference's headquarters in Rosemont, Ill., will open to the public on Saturday, June 7.  The new museum brings the conference's storied academic and athletic history to life and places it at fans? fingertips. Located at the conference?s headquarters at 5440 Park Place in Rosemont, the museum will be open 8 a.m. to 6 p.m. CT on weekdays and 11 a.m. to 6 p.m. on Saturdays and Sundays. Admission to the Big Ten Experience is free?.

The Big Ten Experience features a collection of 13 interactive exhibits showcasing conference notables dating back to 1896, the year the conference was founded. Highlights include the Big Ten Theater which gives patrons a behind-the-scenes, immersive audio and video experience looking at student-athletes and traditions, along with radio and television features of notable accomplishments on and off the field of play.

In addition, touch-screen monitors allow fans to learn more about individuals making a difference in the world beyond the playing fields. Fans of all Big Ten schools will be able to learn about their favorites from each campus, including bios, prominent speeches and correspondence from notable alumni. The digital format of the Big Ten Experience allows for new content to be added on a regular basis.

A full list of Big Ten Experience displays can be found below:

This is B1G : A compilation of the conference?s ?firsts,? ?bests,? ?icons? and ?timelines? including notable speeches, membership and commissioner timelines, NCAA Championship teams, rivalry trophies, the Committee on Institutional Cooperation, national awards - including athletic and academic honors - and more.

Game On (Interactive Game): Attempt to catch a football, stop a soccer ball, or block a hockey puck through an interactive game that promises to test your speed, agility and hand-eye coordination.

Big Ten Connect: View live footage from Big Ten television partners on five screens and interact with the conference?s and schools? social media pages as well as BTN2Go on one of four iPads.

Basketball Court with Interactive Radio Calls: A tongue-and-groove hardwood court featuring 14 program-changing audio calls from men?s basketball games throughout the years. Each call is located on the court where the actual shot took place.

Heisman Trophy Photo Op: Strike a ?Heisman? pose and snap a photo.  The perfect keepsake for any Big Ten fan.

Big Ten Vault: Two video monitors stand back-to-back in the space just outside the Big Ten Theater.  One contains video vignettes of awe-inspiring performances by student-athletes in a variety of sports.  The other contains every Sports Illustrated magazine cover featuring a Big Ten team.

Big Ten Impact: View BTN?s inspiring ?LiveB1G? programs that shine a light on Big Ten students, faculty and alumni who are making a difference in the world through research innovations, education and local community outreach.