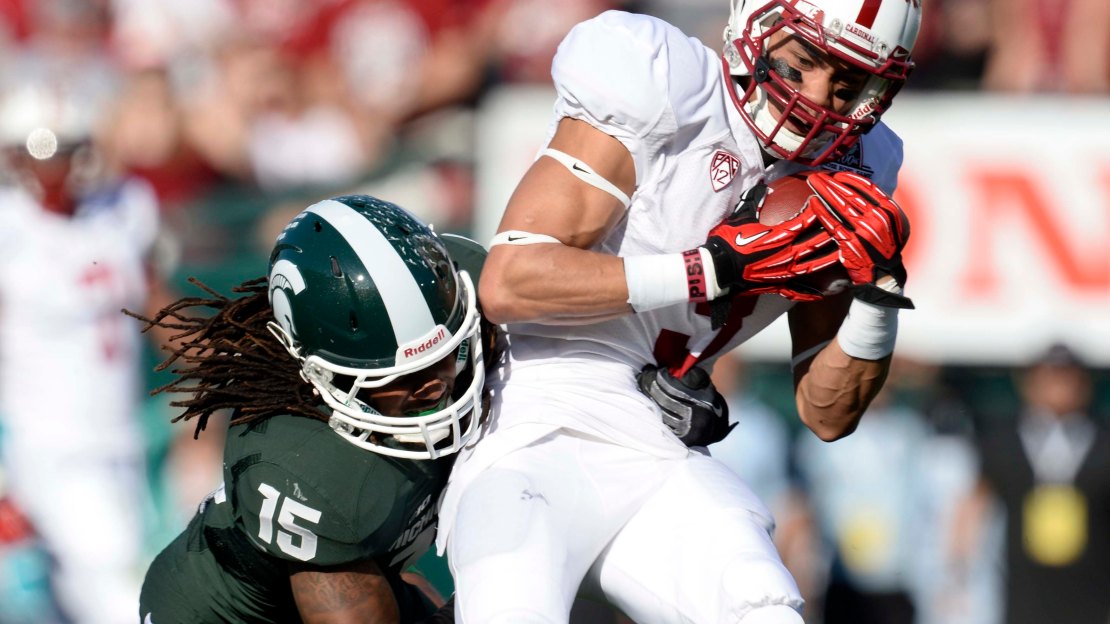 NFL.com continues its series examining top players at each position in college football. The defensive backs are up. And Michigan State?s Trae Waynes is No. 5. Fellow Spartan Kurtis Drummond also is on the list at No. 8, while Ohio State?s Doran Grant is No. 7.

And the site has a cool photo gallery of the all-time top 10 NFL players from MSU. So many great Spartans on the list-but no Lorenzo White.

Cleveland.com continues its series on the Ohio State tattoo scandal with an interview with former OSU president Gordon Gee, who says he thinks ?everyone won.? What? Didn?t Ohio State get in trouble and tarnish its image? Didn?t Jim Tressel lose his job? Wasn?t the program put on probation, which cost the team during a 12-0 run in 2012? Am I missing something?

?Everyone won?? Ah, forget it.

The great Steve Greenberg of the Chicago Sun-Times had a sit-down confab with Illinois A.D. Mike Thomas about the future of Illini coach Tim Beckman, who is entering what some may call a ?crossroads? season. He is 6-18 overall and 1-15 in the Big Ten.

The victories have been vs. Western Michigan; Charleston Southern; Southern Illinois; Cincinnati; Miami (Ohio); Purdue. Two of those victims are FCS schools. Miami went winless last year; Purdue had its worst team ever. So, as you can see, no impressive wins.

Thomas admits ?we need to win more football games.? Yes, well, that?s a start. But I?m guessing Beckman won?t be judged just on wins and loses this fall. It also will be key as to who he loses to and how he loses. Does that make any sense?

Greenberg didn?t stop there. He also put Beckman on his hot seat, asking some point-blank questions as Year Three of the Beckman era dawns. This was a good questions: ?There are a lot of people saying it?s bowl game or bust for you. Are they correct?? Read it all here.

Here is a cool behind-the-scenes video of my fav Spartan Adreian Payne, who goes through graduation and preps for the NBA.

I hope this guy forges a long and lucrative pro career.

What does Sportsbook of Nevada think will be Michigan?s over/under win total? 7.5.

Well, let?s take a look at the Wolverines? schedule ourselves and make a determination:

I think 7.5 wins may be too low. I could see Michigan winning as many as nine games with this schedule. Eight seems VERY possible. Would that make Michigan fans happy? I?m guessing it depends on who are among the teams Brady Hoke and Co., beat. No doubt, the Wolverines can?t get hammered by Michigan State again. And a win in Columbus certainly would keep fans happy. This is gonna be very interesting.

Is the glass half full or half empty for Iowa? The gang at HawkCentral.com wonders as it examines several key areas of the team, including the schedule and coach.

If you have read me at all the last few months, you know how I feel about Iowa: half-full! But I?m still not sold on the receiving corps. And I want to see more from quarterback Jake Rudock. So, I?m not painting my face yet. But I have the brush ready.

Penn State coach James Franklin is obsessed with many things. One is to see Beaver Stadium filled to capacity at 107,000. He began his push for a full house soon after he got the job.

"That stadium will be sold out every single game from here on out."

Franklin added: "Walking into a stadium that is sold out and is passionate, everybody talks about the impact it has on recruits, and it has a tremendous impact on recruits.

When flipping through preview magazines, Purdue fans can?t like what they are seeing for Darrell Hazell's second season. Expectations don?t look rosy.

Athlon predicts a 3-9 finish for the Boilermakers but has all of those victories coming before conference play: It has Purdue 0-8 against Big Ten teams. It said anything but a last-place finish in the West would be a surprise.