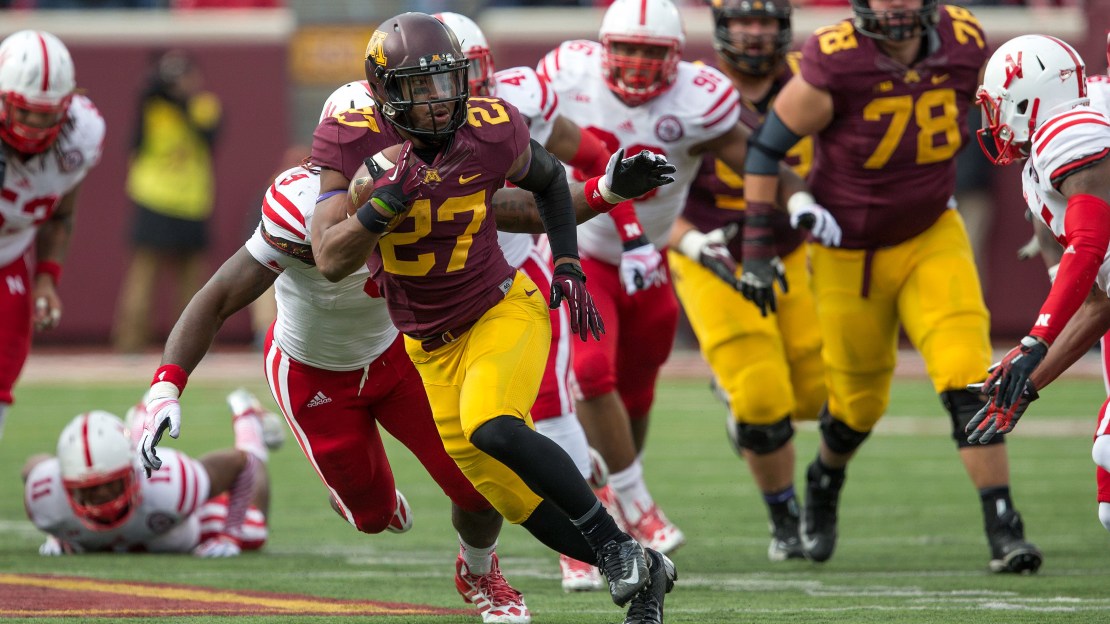 We?ve reached the right side of 100 when it comes to the countdown to the college football season. In less than three months, there will be football. Get excited! Until then, we?re previewing the season.

Today, it?s time for Tom Dienhart to analyze your team's most rugged stretch. See your team?s gauntlet in this post.

ILLINOIS
November. All of it. The month starts with a cold, three-arm shiver of games at Ohio State, vs. Iowa and vs. Penn State. This will be the first time Illinois has played Iowa since 2008. And the season ends with a trip to Northwestern, which has won two in a row vs. the Fighting Illini and eight of the last 11 meetings. This has to just kill Illinois fans. Bottom line: Illinois needs to be at least 5-3 entering November because going 2-2 in these last four games may be asking too much. A 1-3 mark? That?s possible-but still will be a challenge.

INDIANA
Indiana better buckle up between Oct. 11-Nov. 8. That?s when the Hoosiers will play at Iowa, vs. Michigan State, at Michigan and vs. Penn State. Can Indiana grind out one win in that four-game gauntlet? The good news: The Hoosiers have played those teams well in recent years, beating Iowa (2012) and Penn State (2013) and almost dumping Michigan State (2012). IU also has pushed Michigan, which had to battle hard to win 36-33, 42-35 and 63-47 over Indiana in the last three meetings.

IOWA
It?s difficult to find anything too daunting. But, let?s go with the final four-game stretch that begins Nov. 8 at Minnesota and includes a trip to Illinois and season-ending visits from Wisconsin and Nebraska. The Hawkeyes have won the last two battles for Floyd of Rosedale, but Minnesota is a rising program that?s hungry. Yes, Illinois is struggling, but the Illini are improving and playing on the road is always a challenge. Wisconsin has won the last two games with Iowa-both in Iowa City. In fact, the Badgers are 3-1 in their last four trips to Kinnick Stadium. The Hawkeyes are 1-2 vs. Nebraska since the Cornhuskers joined the Big Ten, notching their lone triumph last season.

MARYLAND
Maryland better take its vitamins from Oct. 4-Nov. 22 when it plays what has to be one of the most difficult six-game runs in the nation: Ohio State, Iowa, at Wisconsin, at Penn State, Michigan State and at Michigan. The Terps would do well to win just one of those games. Regardless, that six-game murderer?s row could blow out Maryland?s season. If there is any bright spot, it?s that the Terps have two byes during this six-game gauntlet. That has to help, right?

MICHIGAN
There?s no horribly difficult run. The toughest looks to be between Oct. 11-Nov. 8, when Michigan plays host to Penn State, goes to Michigan State, welcomes Indiana and plays at Northwestern. Michigan has lost four in a row to Penn State and five of six to MSU. The Wolverines needed a triple-overtime miracle to win in Evanston last season. Recently, Indiana has pushed Michigan, which had to battle hard to win 36-33, 42-35 and 63-47 over the Hoosiers in the last three meetings.

MICHIGAN STATE
Michigan State will be pushed during a three-game run from Oct. 18-Nov. 8. The Spartans play at Indiana on Oct. 18, come home to play Michigan, have a bye week and then play host to Ohio State. The Spartans had to rally for a 31-27 win in Bloomington the last time they visited in 2012. No doubt, the Wolverines will be looking for payback after getting throttled 29-6 by Michigan State in East Lansing last year. And Ohio State likely will need to beat the Spartans if it wants to win the East. The Buckeyes also will be looking for payback for that Big Ten title game defeat.

MINNESOTA
The schedule ends with a massive four-game bang, making November a likely make-or-break month. The month begins with visits from Iowa and Ohio State and ends with trips to Nebraska and Wisconsin. That?s as tough as any stretch in the Big Ten. In a scheduling quirk, this will be Iowa?s fourth trip in five years to Minnesota. Iowa is 1-2 in its last three junkets to Minneapolis. Minnesota is 7-43 all-time vs. Ohio State, losing the last eight games and 24 of 25. The only win in that span was in 2000. Minnesota had lost 16 in a row to Nebraska before beating the Cornhuskers last year, 34-23. The Gophers? last win in Lincoln was in 1960.

NEBRASKA
The last three games of the season will be tough, beginning with a Nov. 15 trip to Wisconsin. That?s followed by a visit from Minnesota. The season ends with a trip to Iowa. Bottom line: This trifecta of games figures to determine who will win the Big Ten West. The good news is the Huskers have a bye heading into this challenging stretch. Nebraska didn?t play the Badgers last season after the teams met twice in 2012. Nebraska saw a 16-game winning streak vs. the Gophers end last year with a 34-23 loss in the Twin Cities. The Huskers are 2-1 vs. Iowa since joining the Big Ten; that lone Hawkeye win came last season in Lincoln, 38-17.

NORTHWESTERN
From Sept. 27-Nov. 15, Northwestern will have its work cut out for it during a challenging seven-game stretch. It begins with a trip to Penn State, on Sept. 27, then sees Wisconsin come to Evanston. After that, NU goes to Minnesota, welcomes Nebraska, goes to Iowa and welcomes Michigan. The stretch is capped by the trip to Notre Dame. Bottom line: Northwestern doesn?t figure to be favored in any of these games. Can it go 2-5?

OHIO STATE
Nothing looks too overwhelming. If a stretch has to be picked, the last four games of the season look most perilous. The run begins with a trip to Michigan State on Nov. 8. A visit to Minnesota is next. OSU is 43-7 all-time vs. the Golden Gophers, winning the last eight games and 24 of 25. But Minnesota is on the rise and dangerous. That?s followed by a visit from Indiana and its prolific offense that has posed Ohio State some issues in recent years. IU scored just 14 points last year vs. OSU but tallied 49 in 2012. And the run concludes with Michigan coming to Columbus in the finale.

PENN STATE
Nothing too scary. But circle the back-to-back games at Michigan on Oct. 11 and vs. Ohio State on Oct. 25. The good news: Penn State has a bye between those games. The Nittany Lions won a wild four-overtime game vs. the Wolverines last season in State College to push their winning streak to four in a row over Michigan. Penn State has lost two in a row and four of five to Ohio State.

PURDUE
The Boilermakers better put on their big-boy pants during a four-game run from Oct. 11-Nov. 8, when they play host to Michigan State, go to Minnesota, travel to Nebraska and welcome Wisconsin. The Spartans have won the last five vs. Purdue. The Golden Gophers have taken three of the last five vs. the Boilermakers. The Huskers crushed the Boilers last year in WL. The Badgers have abused Purdue of late, winning eight in a row and 10 of 12. Scores of the last six meetings: 41-10; 38-14; 62-17; 34-13; 37-0; 24-3. If Purdue can win one of these four games, it will be considered a major success.

RUTGERS
Rutgers has an absolutely brutal four-game run from Oct. 4-Nov. 1, when it plays host to Michigan, travels to Ohio State, goes to Nebraska and welcomes Wisconsin. This just isn?t fair. The good news: The Seattle Seahawks aren?t in that run.

WISCONSIN
The last three games figure to define the season-and the Big Ten West championship. Wisconsin welcomes Nebraska, travels to Iowa and finishes the season by playing host to Minnesota. The Badgers are 2-1 vs. the Cornhuskers since they joined the Big Ten. Wisconsin took a 48-17 decision when the Huskers last visited Madison in 2011. The Badgers famously trounced Nebraska, 70-31, when they last met-in the 2012 Big Ten title game. The Badgers have thoroughly dominated the Gophers of late in the battle for Paul Bunyan?s Axe, winning the last 10 meetings and 17 of 19. Minnesota?s lone victories in that span came in 2001 and 2003. The Gophers haven?t left Madison with a win since 1994-when the late Jim Wacker was the coach.