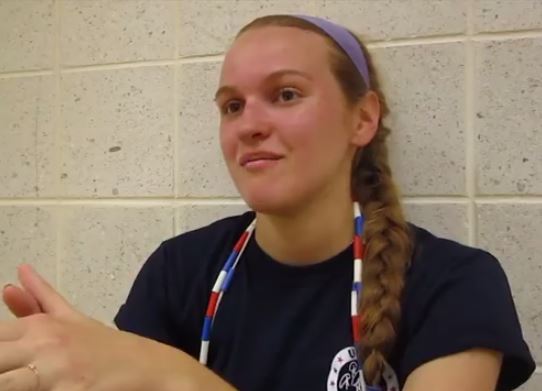 Two former Maryland Terrapin soccer players, Omar Gonzalez and Graham Zusi, are headed to the World Cup in Brazil this month. A fellow Terrapin will join them as a form of entertainment, although she will not be on the pitch.

Fresh off her freshman year at Maryland, Lauren Bork, 18, is part of a 15-person jump rope team traveling to Brazil during the World Cup. The team will perform in churches, orphanages, schools, marketplaces and other areas while making a missions trip.

?I can?t think of a better global stage to perform and share my beliefs,? she says.

Bork, who is from Clarksville, Md., started jump roping when she was eight years old. In the spring of 2004, she joined the Kangaroo Kids Jump Rope Team in Howard County, where she saw her sister, Kristen, now 20, representing the competition team. She cranked up her skills and joined the travel team and competition team. In 2005, she qualified for the regional championship, the USA Jump Rope National Championship, the AAU Qualifier and the AAU Junior Olympic Games. She competed in the USA Championships and AAU Tournament every year from 2005-2013.

In Bork?s final year before leaving for college, her team hosted a spring festival featuring international competition. It was there she met Renee Nix, the coach of the Jumpin? All-Stars from Livingston County, Michigan. Bork and Nix found a bond over their shared passions in faith and jump roping. Nix introduced Bork to her T.U.R.N. team, the jump rope-missionary group she takes to international locations during the summer.

Soon after, when putting together the 2014 T.E.A.M., Nix brought Bork into the fold.

?When it was time to put together a team for this year, she had my contact and asked if I?d be willing to join the team and go to Brazil and share our workshops and our faith,? Bork says.

The team plans on leaving for Brazil on June 30 after the World Cup is underway. The group will start in Manaus before stops in San Paulo and Rio de Janeiro. After the World Cup, the team will head south toward the Paraguay and Argentina borders.

While Bork and her teammates will put on workshops for children, they will also perform in public areas such as parks. When the world focuses on Brazil, T.U.R.N. will jockey for audiences among other street performers. Bork embraces such a foreign challenge.

?I?m not nervous to perform. I love performing in front of people, and I absolutely love teaching different jump rope workshops. I?ve been doing that since I was 10.?

As Bork is meeting the team in Miami before flying to Brazil, preparation is limited. She has a video with a routine she is studying, and she knows some of her teammates from past competitions. T.U.R.N. will be able to practice as a team shortly before making its first appearance in Brazil.

Bork hopes she is not rusty, as her consistency with training has been in flux since she has started as a student. There is no jump rope club or compatible extracurricular outlet. However, she has maintained much of her skills and intensified her preparation as of late.

?I haven?t been able to jump rope as much as I?d like to because I?ve been so busy with my classwork, but when I have enough time, I go to the gym and practice,? she says. On campus, Bork is involved with broadcasting sporting events on Terps TV and campus ministry Cru.

Perhaps the most difficult part of going to Brazil will be the distance. Bork grew up in Maryland and is a college student in the state. Her family will not be making the journey to South America.

For the rising sophomore broadcast journalism major, the weeks in Brazil will serve as the middle portion of her summer. Bork is working two jobs at home to help pay for her tuition. She works the concession stand at a concert venue and works in the front-of-the-house at a restaurant.

For a couple weeks, away from her jobs, Bork will be the entertainment. She will show off jump roping talents at the global level in Brazil.