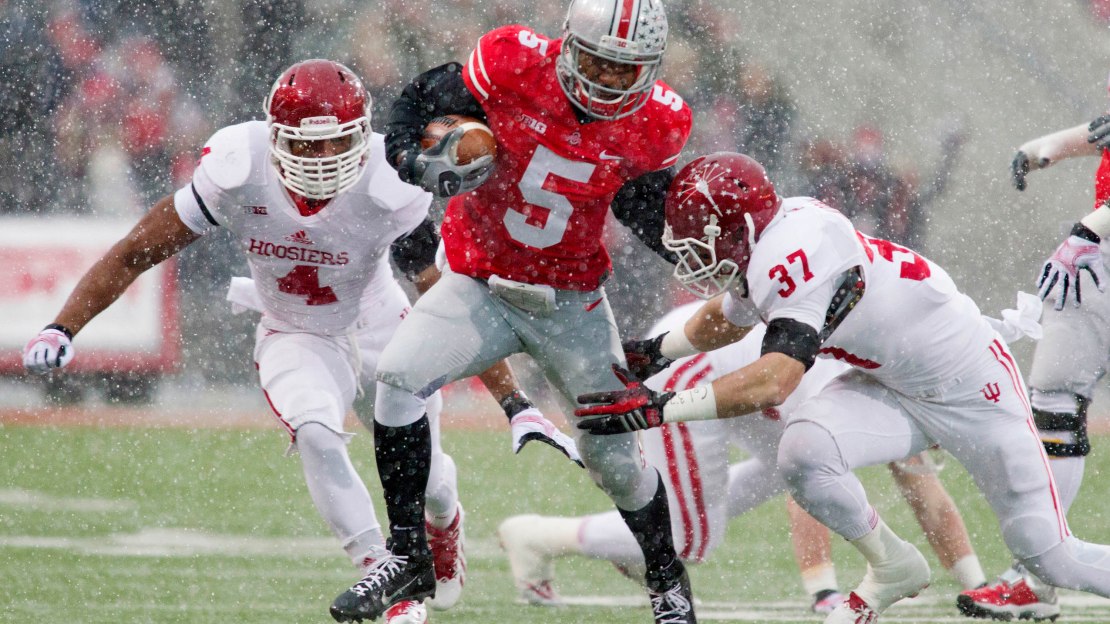 We?ve reached the right side of 100 when it comes to the countdown to the college football season. In less than three months, there will be football. Get excited! Until then, we?re previewing the season. It?s time for Tom Dienhart to single out the toughest conference game for each Big Ten team.

[ MORE: Everything you need to know about the non-con slate, in one post ]

ILLINOIS
Going to Ohio State on Nov. 1 won?t be a treat. The Illini have lost six in a row and are 1-9 in their last 10 games in the battle for Illibuck. OSU scored 60 points on Illinois last year and 52 in 2012. You get the picture. The Illini?s last win vs. Ohio State came, ironically, in Columbus in 2007, when Juice Williams led a monster 28-21 upset of the No. 1 Buckeyes en route to taking Illinois to the Rose Bowl. That seems like 50 years ago, doesn?t it?

INDIANA
Trips to Columbus, Ohio, have been bummers for years for Indiana. In fact, this has been one of the most lopsided rivalries in the nation. The Hoosiers beat the Buckeyes back-to-back in 1987 and 1988. Really. I?m not kidding. Look it up. But since then, Ohio State has ripped off 20 victories in a row with a tie thrown in (1990). Those victories have often been in dominating fashion. This year?s game on Nov. 22 in the Shoe figures to be another chapter in Indiana?s misery vs. OSU.

IOWA
It will come in the finale on Nov. 28, when Nebraska comes to Iowa City. This could end up being a de facto Big Ten West championship game on Black Friday. How cool would that be? Exactly. This is what the Big Ten had in mind when Nebraska came aboard. The Huskers won 13-7 the last time they visited Iowa City in 2012, but the Hawkeyes dominated last year in Lincoln, taking a 38-17 triumph.

MARYLAND
Lots to choose from here with visits from Ohio State, Iowa and Michigan State and trips to Wisconsin, Penn State and Michigan. Let?s go with the visit from the Spartans, who are coming off a 13-win season and Big Ten title and welcome back lots of talent. By the time MSU arrives in Byrd Stadium on Nov. 15, the Spartans may be a well-oiled machine honing in on another division title.

MICHIGAN
Going to Michigan State on Oct. 25 won?t be a treat. In a scheduling oddity, the Wolverines have to travel to East Lansing for a second season in a row. Michigan was absolutely embarrassed in Spartan Stadium last fall, losing 29-6. The Wolverines had 168 yards of total offense with a school single-game record low minus-48 yards rushing on 29 carries (7 sacks). The Wolverines have lost five of the last six meetings and haven?t won in East Lansing since 2007. The momentum in this fierce rivalry has changed dramatically.

MICHIGAN STATE
Let?s go with Ohio State?s trip to East Lansing on Nov. 8, which could be a de facto Big Ten East title tilt. The Buckeyes won 17-16 the last time they visited Spartan Stadium in 2012. But Michigan State took the last meeting, dumping Ohio State 34-24 in the 2013 Big Ten championship game to end the Buckeyes? 24-game winning streak and national title hopes. The Spartans have won two of the last three meetings after losing seven in a row to the Buckeyes.

MINNESOTA
The season ends with a killer 1-2 punch of road games at Nebraska and at Wisconsin. So, take your pick of either of those games. Let?s go with the battle for Paul Bunyan?s Axe. The Badgers have thoroughly dominated the Gophers of late, winning the last 10 meetings and 17 of 19. Minnesota?s lone victories in that span came in 2001 and 2003. The Gophers haven?t left Madison with a win since 1994.

NEBRASKA
My eyes go right to the Oct. 4 game at Michigan State. This could be a preview of the Big Ten championship game. And, I?d be OK with that. The Cornhuskers won the last time they visited East Lansing, taking a 28-24 decision in 2012. Michigan State beat Nebraska for the first time ever last season when it took a 41-28 decision in Lincoln to give the Spartans a 1-7 all-time mark vs. the Huskers.

NORTHWESTERN
You could make the case for several games. But let?s go with the trip to Iowa on Nov. 1. NU has lost its last two junkets to Iowa City, getting beat there 17-10 last season. This is a loaded Hawkeyes team that will be tough to top in Kinnick Stadium. Can Northwestern match Iowa?s strength in the trenches?

OHIO STATE
The junket to East Lansing on Nov. 8 could be for all the marbles in the Big Ten East with a berth in the league championship game on the line. The Buckeyes lost 34-24 to Michigan State in the Big Ten title game last season, ending Ohio State?s 24-game winning streak and trashing its national title hopes. The Buckeyes won the last time they visited Spartan Stadium, taking a 17-16 decision in 2012.

PENN STATE
Take your pick between home games vs. Ohio State (Oct. 25) and Michigan State (Nov. 29). Since the Spartans won the Big Ten and Rose Bowl last season, let?s go with that game. MSU welcomes back lots of talent on offense. And the Spartan defense is always edgy. The teams haven?t met since 2010, when Michigan State won in State College.

PURDUE
The trip to Nebraska on Nov. 1 will be difficult. This will be the Boilers? first trip to Lincoln-and one of Bo Pelini?s best teams will be waiting. The Cornhuskers smashed Purdue last season in West Lafayette, taking a 44-7 decision that wasn?t even that close.

RUTGERS
So many to choose from. Hmmm. Let?s go with the visit to Ohio State on Oct. 18. This game should give the Scarlet Knights a good taste of what a Big Ten football experience is like. There will be over 100,000 fans in the Horseshoe, thirsty to celebrate another win in what could be a championship season. Will Rutgers have any matchup advantages? Probably not. Ohio State and Rutgers never have played.

WISCONSIN
Going to Iowa on Nov. 22 will be a daunting task. The Hawkeyes may be the team to beat in the Big Ten West, with loads of talent back on both sides of the ball. Wisconsin has won the last two games-both in Iowa City, by the way-and four of the last six. In fact, the Badgers are 3-1 in their last four trips to Kinnick Stadium.