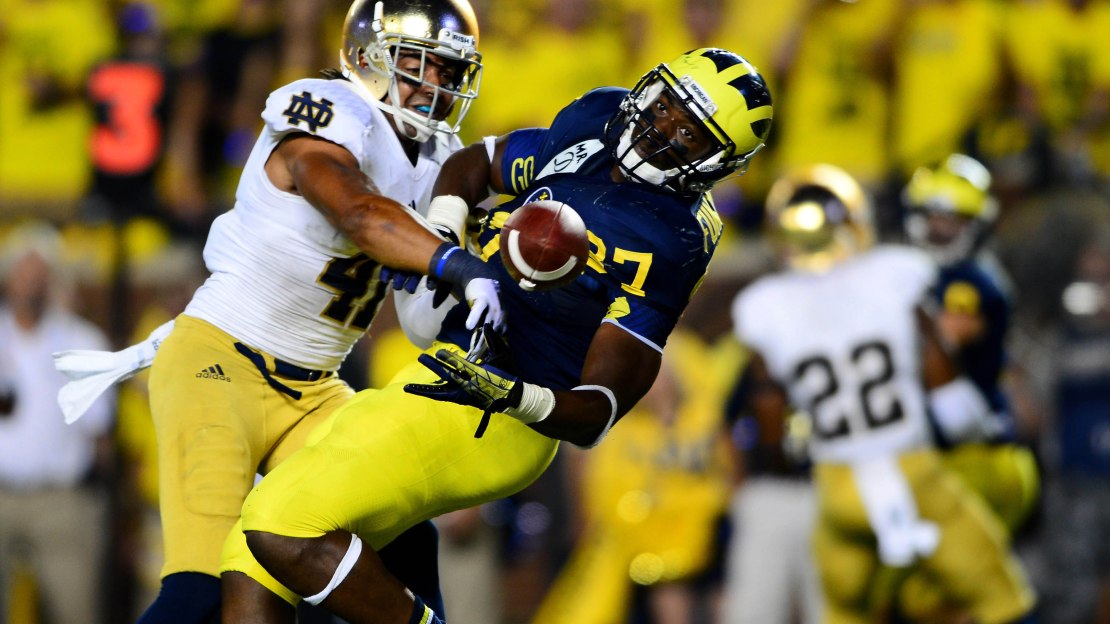 Want a ticket for the Michigan-Notre Dame game? Get ready to pay up. The cheapest ticket available via the secondary market? It?s $419.95. I don?t see that price going down, as the last scheduled meeting between these iconic schools should draw lots of interest.

My advice: Save up this summer if you want to attend this always-exciting rivalry game.

The rumblings for NCAA reform have been going on for some time now. Lots of posturing ? lots of rhetoric ? and now flat-out threats. The Big Ten is on record about being in favor of change that would grant it and other so-called ?Power Five? conferences-Big Ten, SEC, Pac-12, Big 12, ACC–autonomy in passing legislation to benefit the larger leagues.

The SEC recently flexed its muscles for the world to see when it went so far as to say that if the Power Five conferences aren?t given the flexibility to form their own bylaws, they might have to create a new NCAA division - Division IV. The Big Ten isn?t willing to go that far. Still, change is coming. I mean, who is gonna stand in the way of these leagues getting what they want?

Middle Tennessee State? Weber State? Florida Atlantic? Exactly. No one. This is just a snapshot of real life, folks: The entities with the largest wallets and loudest voices typically always get what they want. And, make no mistake about it, these Power Five leagues will get what they want, including more money for all scholarship athletes and longer-term medical coverage for injuries suffered in college.

Cleveland.com is running an interesting series on the Ohio State Tattoo Scandal. Remember that? Hard to believe that was three years ago. The series begins with an interview with Jim Tressel.

Too bad the story didn?t include a question to Tressel about why he knowingly lied to the NCAA in helping get Ohio State probation. Oh, well. And now Tressel is the president of a university. Think about that for a moment.

When it comes to expectations, USAToday says a pair of Big Ten stars are right up there with anyone in the nation. The newspaper recently published a list of five players with the weightiest expectations, and Wisconsin's Frank Kaminsky (No. 2) and Michigan State's Branden Dawson (No. 5) made the list.

Nebraska's Terran Petteway made the list as an honorable mention honoree.

Nebraska received a big lift when touted receiver Damore?ea Stringfellow announced he was transferring from Washington.

James Franklin has an interesting resume that includes stops in places like Maryland and Kansas State, among others on the way to Penn State. He also spent a season-2005–with the Green Bay Packers that had a big impact on him. The business of pro football can often be swift and harsh.

There aren?t many programs hotter than Michigan State. And that?s how Mark Dantonio wants to keep it.

?It?s woke up a sleeping giant, that?s what it?s done,? Dantonio said of Michigan State?s recent success that has seen the program win 42 games the past four seasons with two Big Ten titles and a Rose Bowl championship. ?When you look at it, it?s brought back thoughts of the ?66 team, the ?67 team, the ?88 team.?

Mlive.com has started a series that examines how the recruiting classes that have comprised the bulk of the Brady Hoke era have fared. Who has panned out? Who hasn?t? The series starts with the 2009 class that Hoke inherited from Rich Rodriguez. Without a doubt, the unabashed star turned out to be Denard Robinson.

Not only is former Iowa linebacker Chad Greenway a stud for the Vikings, but he also knows how to rescue people. That?s right, Greenway recently rescued two Minnesota people whose boat was in distress on a lake. You can?t make this stuff up, people.