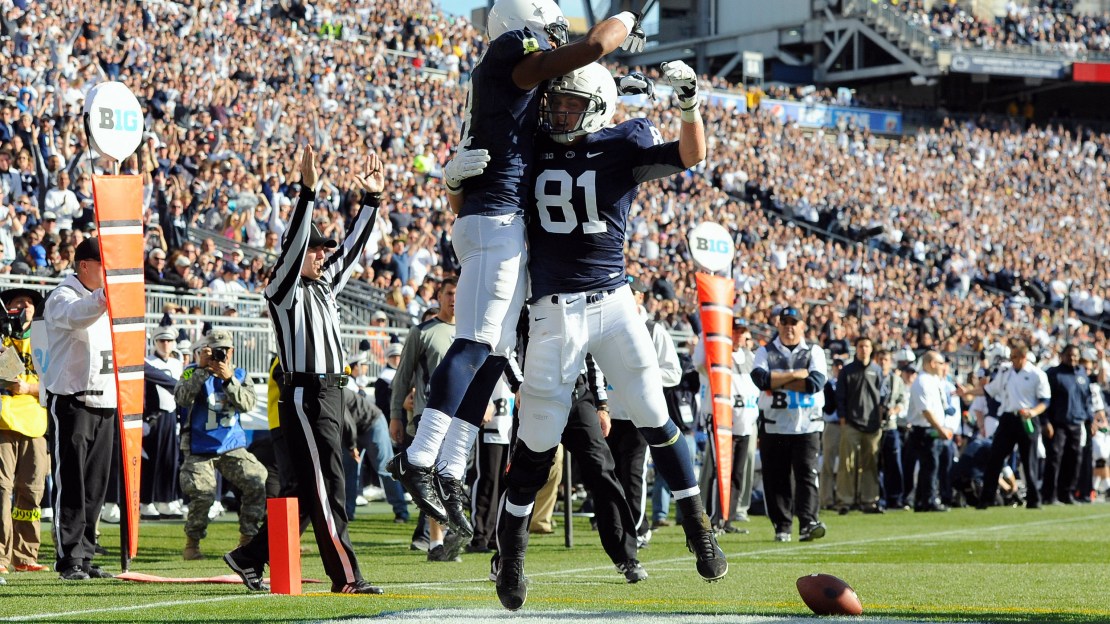 It was just last week when the BTN.com panel offered up our picks for potential breakout players to watch in 2014. Today, I'm going to take it one step further and provide my 2014 Big Ten All-Breakout team. These are the guys who aren't stars yet, but certainly have the talent to be so in 2014. I listed five players on the offensive side of the ball (QB, RB, WR, TE, OL) and five on the defensive side (DE, DT, LB, CB, S).

Did I miss someone? Submit it in the comment box below, or tweet it to me @BTNSean.

RB: Ezekiel Elliott, Ohio State: With Carlos Hyde off to the NFL, it looks like Elliott is the leading man to take over the Buckeyes' starting running back spot. The 6-0, 210 pound Elliott racked up 262 yards on the ground in a backup role last season, averaging 8.7 yards per carry. Also, keep in mind that Ohio State's offense led the nation with 6.8 yards per carry in 2014. This guy is a star in the making.

WR: Geno Lewis, Penn State: Who will replace Allen Robinson as Penn State's go-to pass catcher in 2014? That seems to be the million dollar question, and the leader, as of now, is sophomore Geno Lewis.

Even if Hack isn?t ?great,? Lewis will be Penn State?s No. 1 receiver, which will give him plenty of opportunities to improve upon his quality freshman campaign (18 rec., 234 yards, 3 TD). Keep in mind: the Big Ten lost its top seven leaders in receiving yards, so Lewis could play his way into the best receivers equation. – BTN.com senior editor Brent Yarina, on Lewis.

TE: Adam Breneman, Penn State: This sophomore tight end arrived in Happy Valley with huge expectations last season and showed glimpses of greatness at times, especially during the second half of the season. Now, with one year of experience under his belt and Allen Robinson off to the NFL, this guy should be in store for a big-time season in 2014.

OL: Mike Moudy, Nebraska: Moudy is a guy who was in the Huskers' playing rotation last season following the injury to Spencer Long. Now, with Long off to the NFL, Moudy is expected to become an impact player on Nebraska's offensive line. This is the guy who will help pave the way for what should be one of the top rushing attacks in the country.

DE: Demetrious Cooper, Michigan State: Cooper appeared on just about everyone's list of top breakout spring football stars. Don't expect him to surpass Marcus Rush or Shilique Calhoun on the depth chart, but when Cooper gets into the game, he will make the most of it. Simply put, this guy is a pass rushing machine.

DT: Maliek Collins, Nebraska: This is another guy who fans raved about throughout spring ball. At 6-2, 300 pounds, Collins possesses elite size and athleticism. In fact, Bo Pelini, who coached at LSU before coming to Lincoln, compared him to former LSU All-American Glenn Dorsey.

LB: Darron Lee, LB, Ohio State: Ohio State's roster is loaded with talent from top to bottom, but how are the Buckeyes going to replace Ryan Shazier? It looks like one of the guys in place to start at linebacker is Lee, who has both good size and natural instincts to thrive at the strongside linebacker spot.

"Lee emerged in the spring, showing skills and instincts that could make him a difference maker." – BTN.com senior writer Tom Dienhart, on Lee.

CB: Darian Hicks, CB, Michigan State: The Spartans must find a way to replace the captain of the "No Fly Zone" in 2014. Enter Darian Hicks, a talented corner who has all the skills to be the next great member of the Spartans' vaunted secondary. The 6-0, 180 pound corner had a standout spring game and showed that he is ready to take over the void left by the departure of All-American and reigning Thorpe winner, Darqueze Dennard.

S: Vonn Bell, Ohio State: The Buckeyes will have the challenge of replacing three starters in their defensive backfield in 2014. One of the new starters will be Bell, who saw action as a true freshman last season and actually started in the Orange Bowl vs. Clemson. This guy was a mega-recruit who showed signs that he could be a special talent for years to come in the Scarlet and Gray.