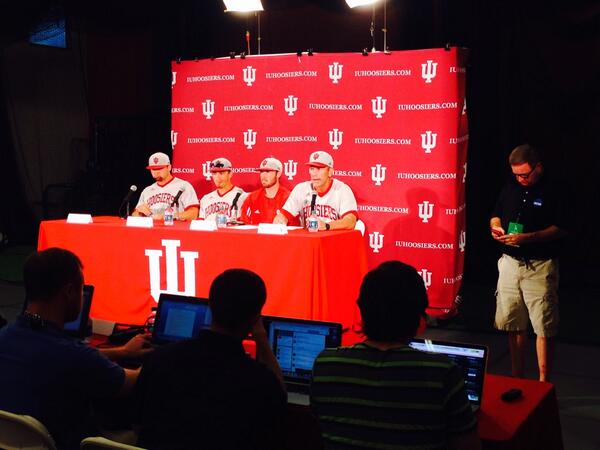 Day 2 of NCAA regional baseball action Saturday saw Indiana down Stanford, 4-2, and Nebraska rally in the ninth inning to beat Binghamton, 8-6, in an elimination game. The Hoosiers will play the winner of the Stanford-Youngstown State game at 6:05 p.m. ET Sunday. Win, and Indiana is off to the Super Regionals. The Huskers will play at 1 p.m. ET Sunday in an elimination game.

INDIANA 4, STANFORD 2 | RECAP | BOX
Big Ten Player of the Year Sam Travis went 3-for-5, including a home run, and Big Ten Pitcher of the Year Joey DeNato threw 7.1 strong innings to help Indiana down Stanford, 4-2, in the Bloomington Regional winner's bracket Saturday night. DeNato (13-1), who allowed two runs on six hits, set an Indiana single-season record with his 13th win. The Hoosiers, the lone undefeated team left in the Bloomington Regional, are one win away from advancing to their second straight Super Regional. It can happen as soon as Sunday night, as Indiana would advance with a win over the winner of the Stanford-Youngstown State game at 6:05 p.m. ET.

NEBRASKA 8, BINGHAMTON 6 | RECAP | BOX
Trailing by one run and two outs away from the end of the 2014 season, Nebraska?s offense rallied for three runs in the top of the ninth inning on its way to a 8-6 win over the Binghamton Bearcats in an elimination game on Saturday afternoon at Allie P. Reynolds Stadium. The No. 19 Huskers are now 41-20 on the year, and will continue NCAA Tournament play tomorrow at 12:05 p.m. against the loser of tonight?s game between Cal State Fullerton and Oklahoma State.

Ryan Boldt was 3-5 today with 3 runs and an RBI in today's win. pic.twitter.com/0KxBuH0dOS