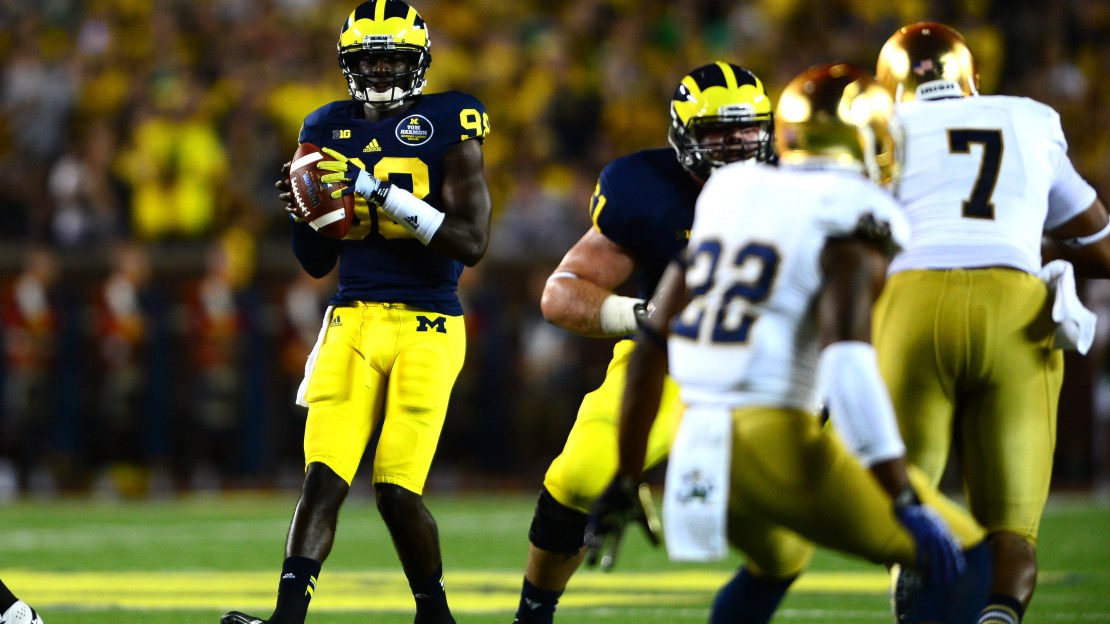 We've reached the right side of 100 when it comes to the countdown to the college football season. Three months from now, there will be football. Get excited! Until then, we're previewing the season. It's time for Tom Dienhart to single out your team's toughest non-conference game.

ILLINOIS
A Sept. 13 trip to Washington will be a good test. The teams met last season in Chicago?s Soldier Field, with the Huskies taking a 34-24 victory to be a buzzkill to a 2-0 Illinois start. The Illini won just two times after the loss to U-Dub, killing the party mood along Green Street.

INDIANA
Going to Missouri on Sept. 20 will pose a big challenge. The Tigers are the defending SEC East champs and tore apart the Hoosiers in Bloomington last year, notching a 45-28 win and gaining a Memorial Stadium opponent record 623 yards. Here is a weird series note: The Hoosiers? last two trips to Columbia ended in ties (1991 and 1988).

IOWA
Take your pick between Iowa State?s visit on Sept. 13 or the trip to Pitt the next week. Let?s just go with the rivalry game. The Cyclones have been a pain in Ferentz?s keister, going 8-7 vs. Captain Kirk. Iowa State gets jacked to play Iowa, which usually always has better talent. Still, Iowa State has found a way to pace this rivalry, going 9-7 in the last 16 meetings after Iowa ripped off 15 wins in a row in the Cy-Hawk Series from 1983-97.

MARYLAND
A visit to Syracuse-Edsall?s alma mater-on Sept. 20 is the final dress rehearsal for the Terps before they embark on Big Ten action. The Orange went 7-6 last season in their ACC debut and are a program moving in the right direction. The Orange won last year?s meeting in College Park and have won five in a row in the series and six of seven.

MICHIGAN
All eyes will be on South Bend, Ind., on Sept. 6, in what is the last scheduled meeting between iconic rivals Notre Dame and Michigan. The prime-time clash will be a good litmus test for a Wolverines squad that needs a win to build confidence coming off a 7-6 season. Michigan has won four of the last five meetings. The lone defeat: In 2012 in South Bend, when Denard Robinson committed six turnovers in a 13-6 loss.

MICHIGAN STATE
This is a no-brainer. The journey to Oregon on Sept. 6 will be one of the most anticipated non-league games in the nation. It doesn?t get much better than a matchup between the high-flying Duck offense and the steely Spartan defense. The schools most recently met in 1998-1999, as each team won on its own turf in battles between Mike Bellotti and Nick Saban.

MINNESOTA
No doubt, going to TCU on Sept. 13 will be difficult. Yes, the Horned Frogs are coming off a 4-8 record. Still, Gary Patterson has a top-flight Big 12 program that?s always physical and always plays hard. As a sidebar, Patterson and Kill are best buddies. So, there?s that. The Gophers have two home games as tune-ups, playing FCS Eastern Illinois and Middle Tennessee State. So, that will help.

NEBRASKA
While the trip to Fresno State has ?scary? written all over it, let?s go with the visit from Miami (Fla.) on Sept. 20. The Cornhuskers should be tuned up and ready after having played three games. No, these aren?t Jimmy Johnson, Dennis Erickson or Butch Davis? Hurricanes, but Miami has some top-end talent and will be a good test for Nebraska coming off a 9-4 mark. The teams last met in the Rose Bowl for the national title after the 2001 season, which the Canes won, 37-14, over Eric Crouch?s Huskers.

NORTHWESTERN
It?s rare for a Big Ten team to play a non-league game in November. But Northwestern travels to Notre Dame on Nov. 15. The teams haven?t met since the Wildcats famously went to South Bend in 1995 and stunned the Fighting Irish, 17-15, behind Pat Fitzgerald. That was an opening salvo in NU?s improbable march to the Rose Bowl.

OHIO STATE
The visit from Virginia Tech on Sept. 6 will be a fun clash. The Hokies are famous for their strong, aggressive defense, killer special teams and physical offense, but they will be breaking in a new quarterback. OSU and Va Tech never have played. The Buckeyes will have a tough tune-up, playing on the road vs. Navy to open the season. The Midshipmen?s triple-option offense can be confounding. Ohio State is 4-0 all-time vs. Navy, last playing in 2009 in Columbus.

PENN STATE
Not a lot of heavy lifting. In fact, you?ll be hard-pressed to find many lighter non-conference schedules in the Big Ten. The toughest test figures to be the first, as the Nittany Lions will play Central Florida in Ireland on Aug. 30 in the ?Croke Park Classic.? UCF won in State College last season en route to a Fiesta Bowl bid, but quarterback Blake Bortles is gone. Still, the Knights have plenty of athletic ability and are well-coached by George O?Leary.

PURDUE
The game with Notre Dame on Sept. 13 will be daunting. It always is. The Boilermakers have lost the last six meetings and eight of the last nine vs. the Fighting Irish. This game will be played in Lucas Oil Stadium in Indianapolis, marking the 30th anniversary of when these schools met in the inaugural football game in the Hoosier Dome. On that day in 1984 in Circle City, the Boilermakers stunned No. 8 Notre Dame, 23-21, behind quarterback Jim Everett. Could lightning strike again for Purdue?

RUTGERS
Playing Navy never is a treat. Playing Navy on the road is even less of a treat. Alas, that?s Rutgers? fate, as it travels to Annapolis on Sept. 20 and gets to deal with that confounding triple-option offense that vexes so many defenses. Rutgers has won four of the last five meetings, the last of which was in 2011.

WISCONSIN
Whoa! It?s a doozy-it?s the opener vs. LSU in Houston. Les Miles? Bayou Bengals have been one of college football?s premier programs for several years. The Badgers will be pushed to their athletic limits. LSU lost a lot of key personnel, but it still may be the most talented team Wisconsin faces all season. What a litmus test. Wisconsin is 0-2 all-time vs. LSU, falling in 1971 and 1972 in a home-and-home series.