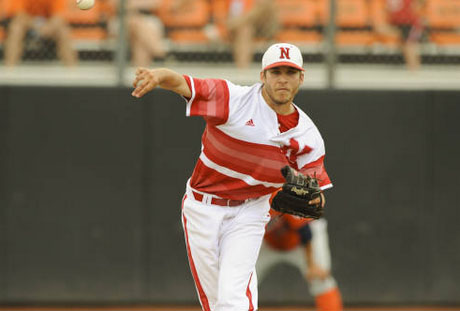 NCAA regional baseball action got underway Friday. Big Ten regular season and postseason champ Indiana downed Youngstown State, 10-2, while Nebraska lost a 5-1 decision to Cal State Fullerton. Up next: Indiana takes on Stanford at 6:05 p.m. ET Saturday in the Bloomington Regional winner's bracket, and Nebraska plays Binghamton in the Stillwater loser's bracket. Catch up on all the action in this post.

INDIANA 10, YOUNGSTOWN STATE 2 | RECAP | BOX
Indiana (43-13) won its opening game of the NCAA Bloomington Regional with a 10-2 triumph over Youngstown State (16-37) on Friday night at Bart Kaufman Field. In front of a record 4,125 fans, the Hoosiers pounded 15 hits to move on in the winner's bracket. Schwarber went 4-for-5 and added a double to go along with his 13th home run of the year. He totaled three RBI in the game and scored three times.

.@IUBaseballNews's @kschwarb12 is greeted at home plate after his home run during the NCAA Tourney Friday. pic.twitter.com/Tiv8S1FHRZ

CAL STATE FULLERTON 5, NEBRASKA 1 | RECAP | BOX
Playing in a NCAA Regional for the first time since 2008, Nebraska (40-20) dropped a 5-1 decision to Cal State Fullerton on Friday afternoon at Allie P. Reynolds Stadium. The game was a pitcher?s duel for most of the day, with four of the game?s six runs coming in the eighth inning. With the game tied 1-1 and the bases empty with two outs in the top of the eighth, the Titans (33-22) loaded the bases and J.D. Davis smashed a grand slam over the left-field fence to put the Titans on top 5-1.