BTN.com's breakout players to watch in 2014 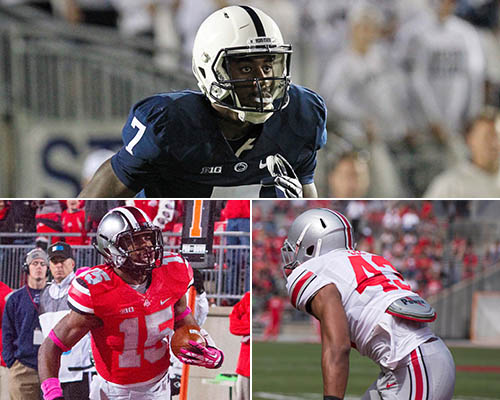 Thursday, the BTN.com panel offered its picks for the Big Ten's most underrated player entering 2014. Today, it's time to consider potential breakout players. These are the guys who aren't household names but have the talent and opportunity to be so in 2014. In other words, guys like Connor Cook, David Cobb and Jeremy Langford prior to last season. See our picks in this post.

TOM DIENHART
Darron Lee, LB, Ohio State. Ohio State needs help at linebacker with Ryan Shazier off early to the NFL. Truth be told, even with Shazier, the Buckeye linebacker play wasn?t up to par in 2013. But that soon could be changing as plenty of talented players develop. A guy I?m watching is redshirt freshman Darron Lee, who looks ready to take over at strongside linebacker after Joshua Perry was moved to Shazier?s weakside spot. Lee emerged in the spring, showing skills and instincts that could make him a difference maker. But he?s being pushed by fellow redshirt freshman Chris Worley, giving the Buckeyes some nice options as breakout players at the strongside linebacking slot. Also, keep an eye on true freshman Raekwon McMillan, who is pushing Curtis Grant at middle linebacker after enrolling early.  So, take your pick from Lee, Worley and McMillan as breakout Ohio State linebackers. But when it?s all said and done, I think Lee will emerge the most this fall.

SEAN MERRIMAN
Ezekiel Elliott, RB, Ohio State. I almost chose this guy as my most underrated player in yesterday?s post, but then I realized, it?s tough to refer to a running back as being ?underrated? when he?s only carried the ball 30 times. However, Elliott is a perfect fit in this category, especially after the loss of starting tailback Carlos Hyde to the NFL. With Hyde carrying the rushing load last season, the Buckeyes offense led the nation with 6.8 yards per carry. Now, Elliott will be looked at to take over the role as Ohio State?s go-to tailback, and he should be an absolute force in that backfield. Despite playing in a backup role during his freshman year, Elliott still managed to gain 262 yards on the ground, an average of 8.7 yards per carry, which was tops among all Buckeye players who had at least 30 rushing attempts. This is an Ohio State team that loves to run the football, and Elliott has the size and skill to be the next great Buckeye running back.

BRENT YARINA
Geno Lewis, WR, Penn State. Part of me wants to go with Illinois QB Wes Lunt, but Tim Beckman still hasn't tabbed his starter. That takes me to Lewis, the receiver who faces the daunting task of filling two-time Big Ten Receiver of the Year Allen Robinson's shoes. They are big shoes, no doubt, however let's not forget who Lewis has throwing the ball his way. Great quarterbacks have a way of bringing out the best in their receivers, and Christian Hackenberg boasts all the tools to become great in his sophomore season. Even if Hack isn't "great," Lewis will be Penn State's No. 1 receiver, which will give him plenty of opportunities to improve upon his quality freshman campaign (18 rec., 234 yards, 3 TD). Keep in mind: the Big Ten lost its top seven leaders in receiving yards, so Lewis could play his way into the best receivers equation.