Who is Big Ten's most underrated player entering 2014 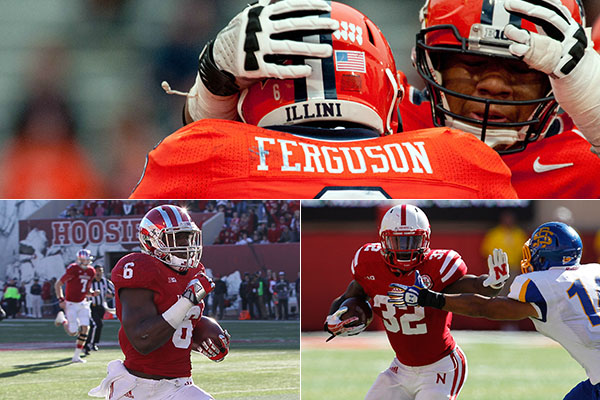 Names such as Ameer Abdullah, Shilique Calhoun, Melvin Gordon, Randy Gregory, Braxton Miller and Brandon Scherff receive plenty of hype, and for good reason. What about the guys who produce but don't receive the appropriate fanfare, though? You know, the underrated players. The BTN.com team offered its most underrated players entering 2014, and you can see our picks in this post. Spoiler alert: Running backs were a popular choice. [ MORE: View Tom Dienhart's 2014 Big Ten schedule analysis posts ] TOM DIENHART Josh Ferguson, RB, Illinois. When the conversation about top Big Ten backs breaks out, you always hear about Nebraska?s Ameer Abdullah, Wisconsin?s Melvin Gordon and Michigan State?s Jeremy Langford, among others. But don?t forget about Ferguson. The diminutive back is a jack-of-all trades who is as well-rounded as any running back in the conference. To wit: He led all Big Ten running backs with 50 catches for 535 yards. Ferguson added 779 yards rushing. Add it all up, and Ferguson finished ninth in the Big Ten in all-purpose yards with 112.6 per game. Yet, he remains largely anonymous because of Illinois? lack of success. But don?t sleep on Ferguson, who again figures to be a prime weapon in a Fighting Illini attack that continues to improve under coordinator Bill Cubit.

SEAN MERRIMAN Imani Cross, RB, Nebraska. There are so many good choices here, but I?m going with a guy who doesn?t receive a ton of publicity, simply because he plays behind Ameer Abdullah, one of the top backs in the nation. Cross is a force in the backfield, and he could start for a number of teams. In 2013, the 6-1, 225 pound back rushed 85 times for 447 yards and 10 touchdowns, good enough for 10th in the Big Ten. Even more impressive, he scored on every 8.5 carries, far and away the best number among the conference's rushing TD leaders. Cross has that unique size/speed combo, which is something you love to see in a running back. The Big Ten is loaded with talented backs, so you often forget about the guys outside of the big names such as Melvin Gordon, Ameer Abdullah and Jeremy Langford. Don?t forget about Cross heading into this season.

BRENT YARINA Tevin Coleman, RB, Indiana. Did you know Coleman averaged 7.3 yards per carry last season, which tied for second with Carlos Hyde and was just 0.5 behind leader Melvin Gordon? Did you know Coleman ran for 958 yards (106 ypg) and 12 TDs (1.3 pg) in just nine games last season? Still, in a league with Gordon, Ameer Abdullah, Jeremy Langford and Venric Mark, among several others, the Indiana back isn't receiving the hype he deserves. Blessed with size and speed, Coleman is a home-run threat who's poised to play a bigger role in the Big Ten's most exciting offense now that RB Stephen Houston and three of the top pass-catchers are gone. I can't wait.