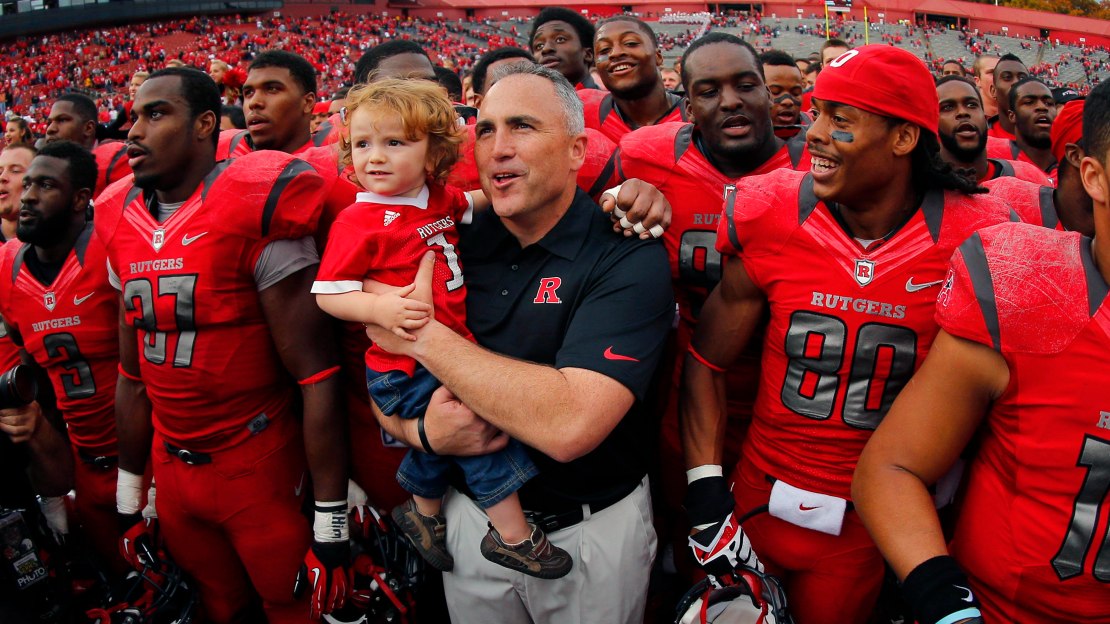 Rutgers is ready to take the lid off of its first Big Ten season. And excitement permeates the campus. Great potential looms-as do great challenges.

The 2014 schedule is one of those ?great challenges,? as it could dampen the enthusiasm of the Scarlet Knights. There are myriad difficult games, thanks to playing in the rugged Big Ten East. And the cross-division games are daunting, too, with Nebraska and Wisconsin on the to-do list.

Bottom line: Getting to a bowl for a fourth season in a row will be difficult for Kyle Flood, as he begins his third season as coach.

Here?s a breakdown of Rutgers? 2014 schedule.

Toughest non-conference game: Playing Navy never is a treat. Playing Navy on the road is even less of a treat. Alas, that?s Rutgers? fate, as it travels to Annapolis on Sept. 20 and gets to deal with that confounding triple-option offense that vexes so many defenses. Rutgers has won four of the last five meetings, the last of which was in 2011.

Toughest conference game: So many to choose from. Hmmm. Let?s go with the visit to Ohio State on Oct. 18. This game should give the Scarlet Knights a good taste of what a Big Ten football experience is like. There will be over 100,000 fans in the Horseshoe, thirsty to celebrate another win in what could be a championship season. Will Rutgers have any matchup advantages? Probably not. Ohio State and Rutgers never have played.

Who they don?t play: The Scarlet Knights were done no favors when it comes to cross-division foes, drawing a trip to Nebraska and visit from Wisconsin-two of the top West division clubs. Rutgers does miss Iowa and Minnesota, which is good. But the Scarlet Knights also miss Northwestern, Illinois and Purdue, teams they may have been able to topple.

Easiest game: The visit from FCS Howard on Sept. 6 should allow Rutgers a chance to catch its breath. Enjoy it, Scarlet Knights. Rutgers has played the Bison three times since 2006, winning all three games and outscoring Howard, 127-14.

Rugged stretch: Rutgers has an absolutely brutal four-game run from Oct. 4-Nov. 1, when it plays host to Michigan, travels to Ohio State, goes to Nebraska and welcomes Wisconsin. This just isn?t fair. The good news: The Seattle Seahawks aren?t in that run.

Factoid: When Penn State visits on Sept. 13 for Rutgers? first Big Ten game, it will be the first time the Nittany Lions have been in Piscataway since 1955. The previous six times PSU played at Rutgers were in East Rutherford, N.J. The Scarlet Knights are 2-22 all-time vs. the Nittany Lions.

Best chance to be upset: The Scarlet Knights won?t be favored often in 2014. But they should be when Tulane visits on Sept. 27. Still, the Green Wave won?t be a pushover, coming off a 7-6 season that included a bowl game. But Rutgers should have more talent than Tulane. The Scarlet Knights are 4-2 all-time vs. the Green Wave; the teams last met in 2010 and 2012 with each team winning in the other?s stadium.

Best chance to pull an upset: Rutgers could stun Maryland when it visits College Park in the season finale on Nov. 29. This could be a de facto bowl for the Scarlet Knights, who may be able to let it all hang out and just play loose and pressure-free in a battle with a fellow Big Ten newbie. These schools last played in 2007 and 2009, with each winning on the road. The Terrapins may be battling for a bowl bid, so they could have a lot to fight for.

Must win: Rutgers plays its first Big Ten game ever on Sept. 13, when Penn State visits. But winning that may be asking too much of the Scarlet Knights. Victories could be difficult to come by in 2014. So, Rutgers would benefit from opening the season with a win vs. Washington State in a game being played in Seattle. Still, that could be difficult. Mike Leach appears to have his pass-happy Cougars ready to break out in Year Three of his regime. Still, a win by the Scarlet Knights would provide some needed confidence and mojo coming out of the gate. Rutgers and Wazzu never have played.

Bye weeks: The first bye comes after six games, following a visit from Michigan. Rutgers will need the respite as it digs in vs. the aforementioned most rugged stretch of the season. The Knights play three more games before the second bye comes, following Wisconsin?s visit. Rutgers then will finish the season with three games.