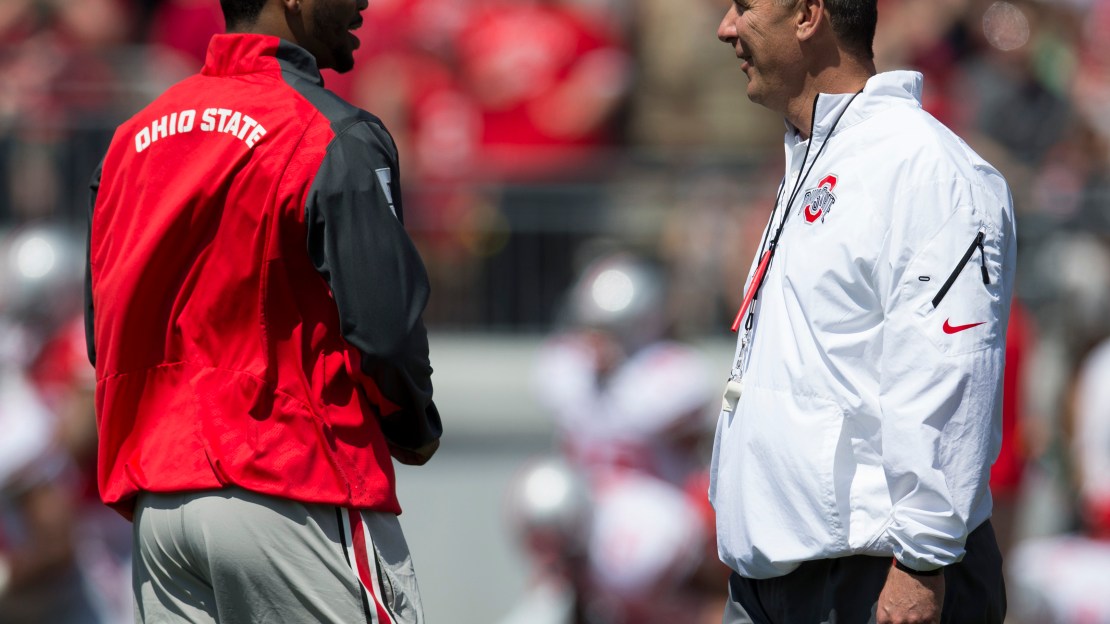 Here are the three Big Ten tandems and a few graphs on why they earned a spot on the list:

"Aside from Waco, Texas, there might not be a more perfect marriage of system and skill set than Meyer?s spread offense and Miller?s dual-threat talents. The duo has produced over 6,000 yards of total offense and a perfect 24-0 record in the regular season over the last two years since Meyer got to Columbus."

Hack (Hackengerg) is a No. 1 overall type of talent and, now, he has cult-of-personality James Franklin running the show in Happy Valley. Franklin is unproven in the Big Ten but his SEC resume speaks for itself, as he led the Commodores to unprecedented heights in Nashville. Huge things are in store for this duo, especially considering the easy schedule and the potential removal of the bowl ban in ?14."

"Mark Dantonio is consistently overlooked when it comes to the nation?s best coaches and Cook wasn?t even the starter going into last season. Cook?s growth over the second half of the season was obvious as the Spartans' QB set career highs in passing yards in back-to-back wins over Ohio State (304 yds) in the B1G title game and Stanford (332 yds) in the Rose Bowl. Now, the 6-foot-4, 220-pounder enters 2014 with massive expectations."

These are the duos one would expect to represent the Big Ten in such a ranking. It is a bit of a surprise to see Penn State ahead of Michigan State, however. Not only are the Spartans the reigning Big Ten and Rose Bowl champs, Connor Cook was an All-Big Ten second-team quarterback (coaches) and Mark Dantonio was the Big Ten Coach of the Year in 2013. That's pretty impressive.

As for a duo that could work its way into the discussion, how about Devin Gardner and Brady Hoke? After a turnover-prone start last season, Gardner was very productive in Big Ten play. Give him some improved line play, and he could help propel Michigan to a bounceback season.