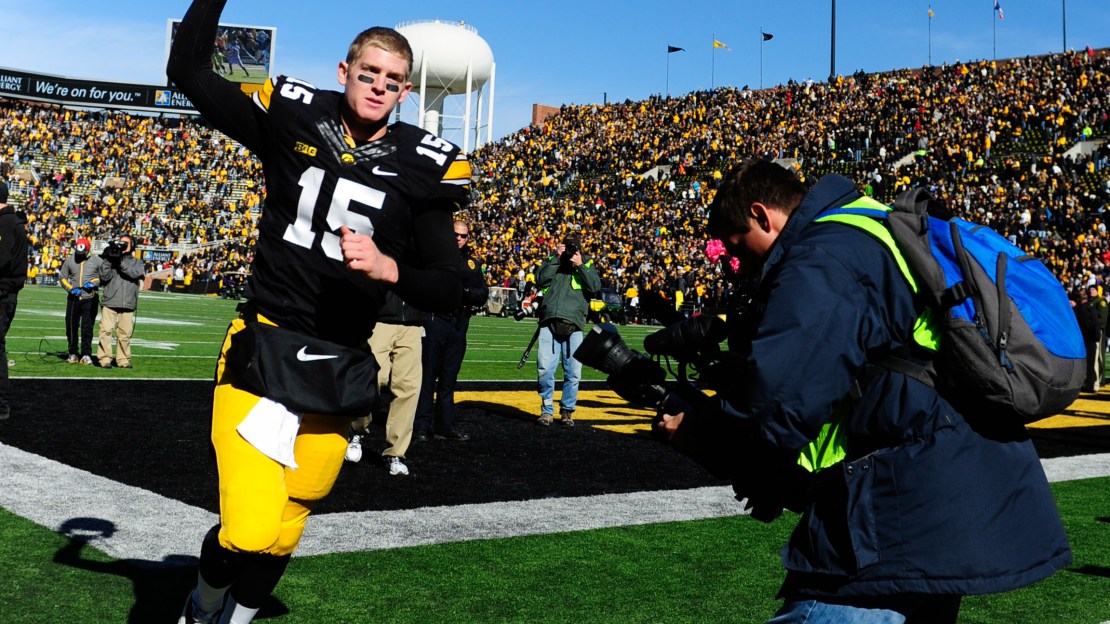 When discussing schedules, seven home games often are mentioned as a magical benchmark for schools. Well, the Big Ten is not set on it, apparently, according to this piece by Lee Barfknecht of the Omaha World-Herald. The coming move to nine Big Ten games in 2016 is one factor causing schools to rethink scheduling. The other is lucrative neutral-site games.

Barfknecht notes that Michigan collected $4.7 million for facing Alabama in 2012 in Arlington, Texas. Wisconsin will take in $2 million for its trip to Houston in August to face LSU.

Where could Iowa land in the postseason? Here are some predictions.

The Capital One Bowl ? the Holiday Bowl ? the TaxSlayer.com Bowl ? the Outback Bowl (again). Me? I think the Hawkeyes at the least will end up in Florida for a bowl. Heck, Iowa could win the Big Ten and be in the playoff. How?s that for fueling the hype?

If you watched the NFL draft, then you saw Ohio State?s Urban Meyer there. It was his first time ever at the event. If he ever gets another invite, he?ll be there again, too.

?How many dreams do you get to be part of with other people?" Meyer told Cleveland.com. "That's pretty cool. What's the saying? It's not how many breaths you take, it's how many moments that take your breath away.

True. The event also offered Meyer some nice exposure, too, which is always nice when it comes to recruiting. The pitch: ?See me at the NFL draft with my players??

James Franklin is proving to be a magical recruiter at Penn State. Here he lays out his recruiting strategy for USAToday. Think of it as a blueprint. So far, so good, as PSU has the No. 2 2015 class in the nation, according to most pundits.

Imagine how well Franklin will recruit if he wins big in State College. This quote from Franklin sums him up best:

"Being successful is doing the little things better than everyone else," Franklin said. "That's kind of my answer for everything. I'm not the most talented guy out there. But something I can control is outworking and out-preparing everyone."

It?s always fun to debate the merits of various jobs. Which are good ones? Which are bad ones? Myron Medcalf of ESPN.com has posted what he thinks are bad college basketball jobs.

And among them is the Minnesota gig. Northwestern and Rutgers also have the dubious honor of being on the list. The inclusion of Minnesota is a bit curious.

Medcalf points out that a practice facility promised to former coach Tubby Smith by the previous administration in 2007 — and then re-promised by Norwood Teague — is still in the concept stage. Williams Arena is old and outdated, he says. The most notable years in the last three decades, including the 1997 Final Four, were wiped away by an academic scandal. And despite the state containing three of the nation's top-30 recruits in 2014, Minnesota wasn't ever really contending for any of them.

"The elite kids in Minnesota don't dream of playing for the Gophers the way Michigan kids want to play for Tom Izzo and John Beilein, or how North Carolina prospects dream of joining the Blue Devils and Tar Heels," Medcalf writes.

Medcalf makes some good points. But I don?t think the Gophers? job is THAT bad. You can win in the Twin Cities. But there is a yawning need to invest in facilities. It?s coming.

Remember Lou Tepper? Maybe not. But I?m sure Illinois fans recall the former Illini grid coach. Bob Asmussen of the Champaign News-Gazette caught up with him.

Big season coming up for Matt Painter?s Purdue squad. What?s gonna happen after two lackluster seasons? No doubt, five newcomers must help. A lot. If they don?t, the Boilermakers may be in trouble.

It?s summer time, so that means it?s time for lists. Lots and lots of lists. So, be prepared. Here?s one from the Orlando Sentinel, which picked its top 10 Big Ten players to watch. Nice to see Northwestern linebacker Chi Chi Ariguzo make the list. He?s always one of my favs.

Amid all of the tumult at Michigan, there is one steady hand. And that belongs to Spike Albrecht. If you can believe this, the junior will be the Wolverines? most experienced returning player next season with 76 games played.