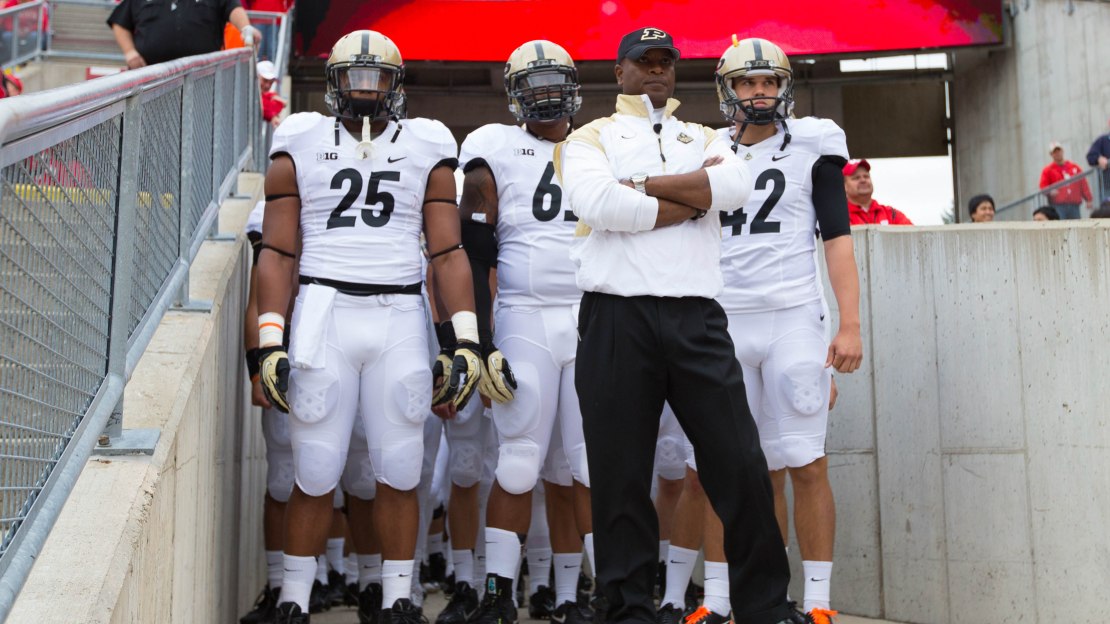 As far as debuts are concerned, Darrell Hazell endured a rough one at Purdue. His maiden voyage in West Lafayette included myriad blowouts along the way to a 1-11 season that saw Purdue go winless in the Big Ten. And the lone victory came vs. FCS Indiana State. And even that was a close call. Add it all up, and it may have been the worst season in school history.

So, there?s only one way for the Boilermakers to go in Year Two under Hazell, right? No doubt, more players are buying into what Hazell is selling. But there?s still a lack of talent-especially up front on both sides of the ball. Football games are won in the trenches-and the Boilermakers just aren?t Big Ten-caliber along the line of scrimmage. Also, the offense lacks explosive playmakers and the linebacking corps is void of top talent.

The schedule won?t offer much relief for Hazell and Co., so any postseason dreams may be just that: dreams. This is going to be a slow rebuild process in West Lafayette.

Here?s a breakdown of Purdue?s 2014 schedule.

Toughest non-conference game: The game with Notre Dame on Sept. 13 will be daunting. It always is. The Boilermakers have lost the last six meetings and eight of the last nine vs. the Fighting Irish. This game will be played in Lucas Oil Stadium in Indianapolis, marking the 30th anniversary of when these schools met in the inaugural football game in the Hoosier Dome. On that day in 1984 in Circle City, the Boilermakers stunned No. 8 Notre Dame, 23-21, behind quarterback Jim Everett. Could lightning strike again for Purdue?

Toughest conference game: The trip to Nebraska on Nov. 1 will be difficult. This will be the Boilers? first trip to Lincoln-and one of Bo Pelini?s best teams will be waiting. The Cornhuskers smashed Purdue last season in West Lafayette, taking a 44-7 decision that wasn?t even that close.

Who they don?t play: Purdue gets a break by missing Ohio State, Michigan and Penn State. Good thing, because the Boilermakers need a break. Purdue also misses Rutgers and Maryland.

Easiest game: When you are coming off a 1-11 season, is there really an ?easiest game?? Since the category is here, I?ll pick one. Let?s go with the visit from FCS Southern Illinois on Sept. 20. The Salukis went 7-5 last year. Purdue?s only win last year was vs. a FCS foe, as it downed Indiana State in the opener. Let?s hope the Boilermakers don?t have to struggle to beat a FCS foe this year.

Rugged stretch: The Boilermakers better put on their big-boy pants during a four-game run from Oct. 11-Nov. 8, when they play host to Michigan State, go to Minnesota, travel to Nebraska and welcome Wisconsin. The Spartans have won the last five vs. Purdue. The Golden Gophers have taken three of the last five vs. the Boilermakers. The Huskers crushed the Boilers last year in WL. The Badgers have abused Purdue of late, winning eight in a row and 10 of 12. Scores of the last six meetings: 41-10; 38-14; 62-17; 34-13; 37-0; 24-3. If Purdue can win one of these four games, it will be considered a major success.

Factoid: Purdue has played Notre Dame every year since 1946. But after meeting in Indianapolis this fall, the Purdue-Notre Dame series will have gaps. The schools will next meet in 2020 and subsequently will play in 2021, 2024, 2025 and 2026. Purdue and ND are working on additional dates beyond 2026.

Best chance to pull an upset: Purdue won?t be favored in many games-maybe just three. So, there will be plenty of chances to pull upsets. The best may be when the Boilers go to Illinois, which won an ugly game in West Lafayette last season – the Illini?s lone Big Ten win the last two seasons. Purdue won the last time it visited Champaign in 2012. In fact, the Boilers have won three of their last four trips to Illinois.

Best chance to be upset: Purdue needs to be wary when Central Michigan visits on Sept. 6 in the second game of the season. The Chippewa?s went 6-6 last year. MAC teams have been a thorn in Purdue?s side over the years, as the Boilers have lost to the likes of Northern Illinois, Bowling Green and Toledo.

Must win: Purdue needs to get back the Old Oaken Bucket from Indiana. Alas, winning in Bloomington in the season finale, on Nov. 29, may be a long shot. The Hoosiers are on the rise and have a top offense. Instead, the Boilers need to focus on trying to beat visiting Northwestern the week before. The Wildcats are a program Purdue needs to crawl over in the Big Ten West. NU has won four of the last seven meetings. The Boilermakers won the last time these teams met in 2010. But the Wildcats have won two of the last three times they have visited West Lafayette. Still, NU may be beatable.

Bye weeks: Purdue will play eight games before its first bye. Not ideal. But the break comes during the team?s most rugged stretch of the season-between trips to Minnesota and Nebraska. The second bye comes just two games later between visits from Wisconsin and Northwestern.