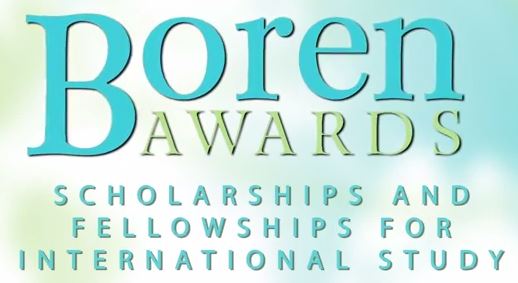 Based within a few miles of the nation?s capital, Washington D.C., it makes sense that the University of Maryland would have a pronounced program in international studies and a corresponding preponderance of students interested in foreign languages studies.

It follows then that the University of Maryland would also be the nation?s leader in students being awarded Boren Scholarships for the study of foreign languages which are not part of mainstream American speech.

Twelve University of Maryland undergraduates received awards for intensive international language study from the Boren Scholarships, which are part of a program that operates under the Department of Defense. Each student will received up to $20,000 to study language in a foreign country, and this year?s recipients will be studying seven languages in eight countries, including Brazil, Morocco, Senegal, Mozambique, Jordan, India, China and South Korea. Each recipient will then be required to work for one year for the federal government within three years of graduating from college. The Boren Scholarships are funded by the National Security Education Program, which focuses on geographic areas, languages and fields of study deemed critical to U.S. national security. Developing a young workforce fluent in a language used in countries of national concern is the goal of the program, and for the last three years Maryland has had more scholarship recipients than any other college.

?Maryland is located right next to Washington, D.C., and so we have many students already interested in federal service,?? said Francis DuVinage, the University of Maryland?s Boren Scholarship and Fellowship advisor and director of the National Scholarships office. ?Many of them get internships in federal government, or at think tanks, or at non-profits that are related to their interest while they are studying here."

?We are a flagship program that is part of the National Security Education Program, which supports a specific language program at universities,?? he said. ?We have an Arabic flagship, so we have very motivated Arabic language students. They are very eager to go abroad and continue their studies.?

This year, Maryland will be represented by four students studying Arabic in Morocco, as well as one student in each of these countries: Mozambique (Portuguese), Brazil (Portuguese), India (Urdu), Taiwan (Chinese), Senegal (Wolof), Jordan (Arabic), and South Korea (Korean).

Following their college studies, which can include post-graduate work, the Boren scholarship students are required to find a job that is offered by the federal government and hopefully uses the student?s knowledge of language and international customs and society. Both the University and the Borden Scholarship officials can assist the students in finding their jobs, but it is up to the student to actually acquire the position.

Obviously, such an opportunity is a perfect stepping stone to a student who has interest in a career in either federal government work or foreign relations. But DuVinage said they do not usually end up as interpreters or spies.

?Let me give you an example,?? he said. ?There is a woman who received a scholarship a few years back to study Chinese, and she is now working in the Federal Reserve in the unit that studies the Chinese economy."

?There is another recipient who went to Turkey to study Turkish, and she is currently the research assistant at a think tank in the Naval Post-Graduate College in Monterrey, Calif.?

The Language Flagship Program of which Maryland is a member creates an atmosphere of intense learning on-campus, and includes the creation of ?language houses?? and cultural functions and events that allow students to immerse themselves in the language they are studying. Other Big Ten schools that have Flagship Programs include Michigan State (Arabic) and Indiana (Chinese and Swahili).

For more information about the Boren Scholarships, visit www.borenawards.org/boren_scholarship.