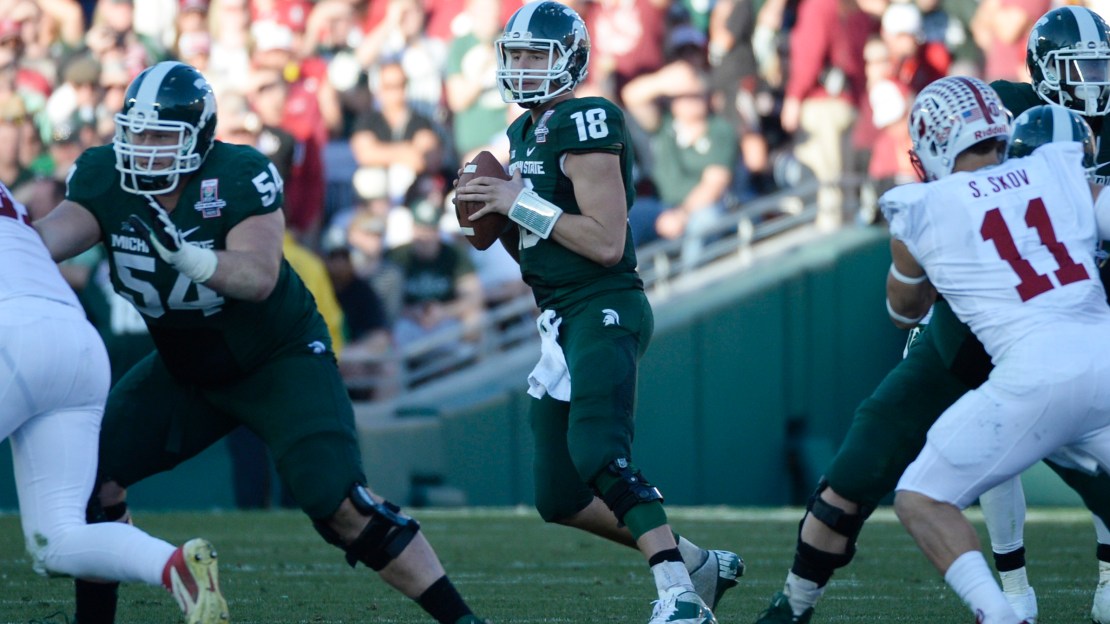 Lots going on in recent weeks, with the NFL draft, Big Ten moving its hoop tourney to Washington in 2017 and the announcement of the Gavitt Tip-off Games with the Big East. My mail box is getting full. Let?s answer some questions.

If Michigan State wins at Oregon, could the Spartans run the table and get into the playoffs? – Crunchy Grattarola

After opening vs. FCS Jacksonville State on Aug. 29, MSU goes to Oregon in what likely will be the only time all season the Spartans aren?t favored. Tough game, no doubt, as the Ducks figure to be a top-five team. If the Spartans can slow down the Oregon offense, it could leave Eugene with a win. MSU has a bye after playing the Ducks. And the rest of the schedule looks pretty favorable, as Nebraska, Michigan and Ohio State all come to East Lansing. Here's my detailed look at the schedule.

What do you think of the Big Ten ?moving East?? – Mike Lipscomb

If the Big Ten was going to add Rutgers and Maryland, it needed to have more of presence in that part of the map. As Jim Delany has said, he wants to ?live? there. By taking the basketball tourney to Washington in 2017, it will further the Big Ten brand and show a commitment to an area the conference wants to call ?home? as much as Indianapolis and Chicago. I wouldn?t be surprised if the league moves the basketball tourney around often, with stops in New York in addition to the traditional Indy and Chicago stops. The scheduling partnership with the Big East also will help the Big Ten get a presence in the east, as well. A smart move that will improve schedule strengths, too.

Will the Rutgers and Penn State game be a trophy game the way the Big Ten designated the Hero's Game between the Huskers vs Hawkeyes? – Nathan

While I do think Notre Dame would be an excellent Big Ten member, the Irish have snubbed the Big Ten for a much easier way for them to get to the championship game. Quite frankly, if ND played a Big Ten schedule, it wouldn't have as easy a path to the playoffs. – Mike Stoffregen

Yes, by playing an ACC-heavy schedule, Notre Dame does have an easier path to the four-team playoff. (I still can?t believe the ACC is letting ND use it like this.) ND wants to play Navy and USC each year, but it?s the one that killed the series with Michigan. The Irish could have made the series with Michigan sacrosanct but opted to protect the games with Navy and USC. The Irish have opted to go their own way, and the Big Ten should just do the best. I think everyone will be OK.

The divisions do look imbalanced. But I like the geographic division. I think it?s good for rivalries. Nothing like familiarity to breed contempt. As for the competitive imbalance, time has a way of shifting the balance of power. Look at the SEC. When it first went to divisions in 1992, the East was dominant with Florida, Tennessee and Georgia. But over time, the West has emerged as the top division behind Alabama, Auburn and LSU. Still, having typed all of this, it?s difficult to ever see the Big Ten West having an extended run of dominance over the Big Ten East. But, crazier things have happened.

I think that a 10 conference game season would be great! But how are you going to get the SEC, Pac-12, Big 12, ACC, and other huge conferences to do the same to make it fair? – Ed Crawford

I also like a 10-game Big Ten schedule, as I wrote here. That would leave just two non-conference games to schedule each year-but both would have to be home games so schools could have seven home games. No doubt, getting two non-league games at home each year could be difficult. As for worrying about what other leagues are doing, forget it. There already is no uniformity, as the ACC and SEC are playing eight-game conference schedules while the Pac-12, Big 12 and Big Ten are or will be playing nine league games. It is what it is, right?

Who do you think will win the Big Ten? – Brodey

In the East, I am leaning toward Michigan State, but Ohio State could take the division. The West should be a good race, too. I think it will come down to Iowa and Nebraska. And, I?m leaning toward picking the Hawkeyes. When it?s all said and done, MSU or OSU should win it all.