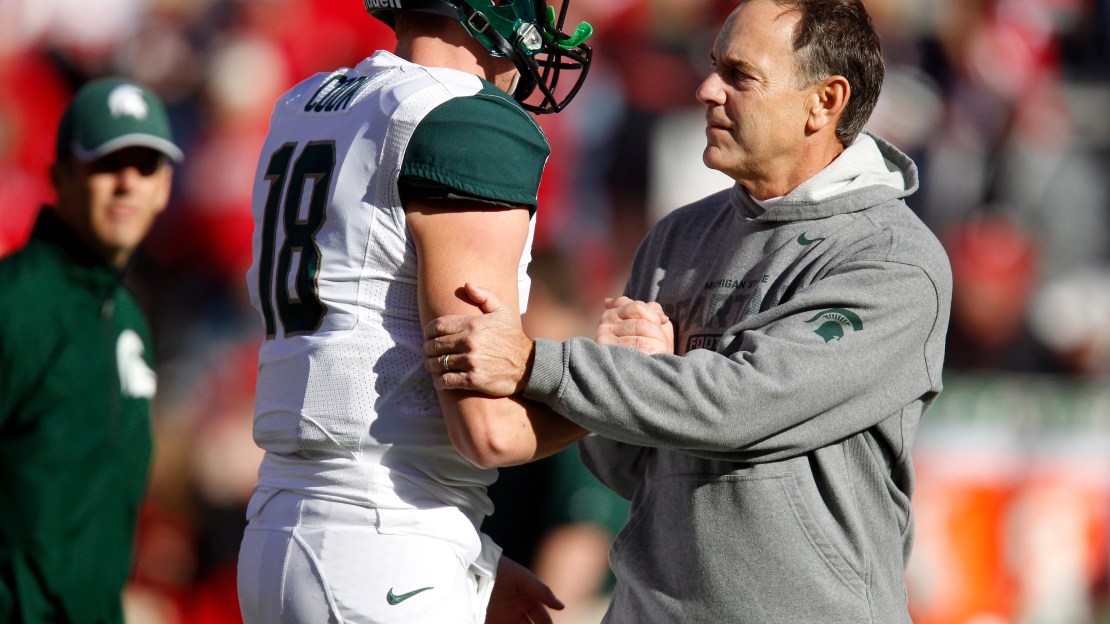 The start of the football season is less than 100 days away, if you can believe it. And there are few more anticipated non-conference games than Michigan State?s visit to Oregon. The Spartans are using the summer as prep time to get ready for that high-flying Duck offense led by Heisman contending quarterback Marcus Mariota. MSU will need the extra prep work. Everyone does.

If the Spartans can return from Eugene with a win, they could be in store for a very special season.

The College World Series soon will be upon us. Tom Shatel of the Omaha World-News takes a look at the top possible storylines that could be headed to Omaha in a few weeks. At the top: Florida State and Jameis Winston, who would become the first Heisman winner to play in the CWS if the Seminoles can make it. If it happens, please hold the crab leg jokes.

Before Bill O?Brien bolted for the NFL, he established Penn State as a place where tight ends thrive. Now, it looks like former stud O?Brien recruit Adam Breneman is primed to become an all-around tight end in 2014. Heck, he may even be the top tight end in the conference.

"I think my role in the offense is going to develop as me being more of a true tight end," said Breneman.

"I think toward the end of the season you saw me becoming more of a tight end like that. I was an in-line blocker. I was playing last year at, like, 230 pounds and it was tough to be an in-line blocker at that weight in the Big Ten."

Bulking up to nearly 250 pounds certainly will help Breneman?s cause.

The NBA draft is in June. And one analyst thinks that Michigan State?s Gary Harris is a lottery pick. I think he?s correct.

On the subject of the NBA draft, here?s a good Mlive.com column on Glenn Robinson III. He knows he has a lot to prove after a sophomore season that fell short of the expectations that many held for him. But know this: Robinson is a stand-up guy who is mature beyond his years. I think he?ll be a good pro. Maybe a better pro than college player.

There are many great traditions in the Big Ten. And Ohio State has a lot of them. Among them: Buckeye Grove. Here?s a gallery of the plaques and trees with an explanation as to what an Ohio State player must do to earn enshrinement.

Speaking of trees in Buckeye Grove, LeCharles Bentley has his back.

The College Football Hall of Fame announced this year?s batch of enshrinees. And Penn State linebacker Shane Conlan is among the honored. Nice story here on how he landed in State College as an unheralded recruit that no one wanted. Credit Nittany Lions defensive coordinator Tom Bradley.

For the first time in his career, Minnesota?s Richard Pitino will be a second-year head coach. And, he?s emphasizing different things for a squad that will fold in six new players.

Amelia Rayno of the Minneapolis Star Tribune notes that last year, the Gophers did a lot of 5-on-5 scrimmages and exercises aimed at getting the players comfortable with a new pick-and-roll-based offense and varied defense, which placed an emphasis on using the entire court and pressing at times.

?Not only because I wanted to establish the way we wanted to play, but also I needed to know what I had moving forward in recruiting,? Pitino told Rayno. ?We?re going to do it different this year.?

This offseason, Pitino says the team will concentrate on individual workouts and weight room work. Chemistry and toughness must improve, according to Pitino.

I?ll leave you with this from Andrew Logue of the Des Moines Register, who isn?t very stoked about the future of Big Ten scheduling.

Logue notes that by going to a nine-game league schedule in 2016, non-conference games figure to look less appetizing for fans. Hey, it?s a trade-off for that extra Big Ten game. But even that additional conference game will be at the mercy of what Logue calls ?divisional roulette.?