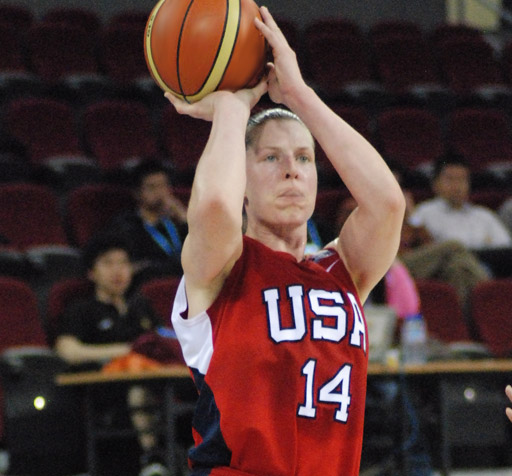 Katie Smith is a champion.

Smith grew up in Logan, Ohio, where she attended Logan High School. She led the Lady Chieftains to a state championship title game. She was the MVP at the inaugural WBCA High School All-America Game in 1992 and she was the 1992 Gatorade National Player of the Year.

When she conquered Logan, she moved on to nearby Ohio State. Smith led the Buckeyes to a Big Ten championship and national title game appearance as a freshman. She finished her four years as the Big Ten?s all-time leading scorer in men?s and women?s basketball, and she was the Big Ten MVP her senior year.

When she conquered Columbus at the collegiate level, she jumped to the now-defunct American Basketball League. She starred on the Columbus Quest and won two titles in the league?s two full seasons.

When she conquered professional basketball at home in Columbus, she moved to the WNBA. Smith played 15 seasons for five teams (1999-2013). She won two WNBA titles, a WNBA Finals MVP, a scoring title and three Olympic gold medals. She was named to the All-WNBA first team twice and the All-Star Game seven times. She is the all-time women?s professional basketball scoring leader with 7,878 points and second on the WNBA all-time list with 6,452 points.

When she conquered the sport, Smith, 39, returned to where it all started: Ohio high school athletics. This past March, Smith was awarded the Ohio High School Athletic Association Ethics and Integrity Award for 2013-2014. Her lifetime achievements both on-and-off the court in women?s basketball were honored as she came full circle.

?It?s something that means a lot. High school is where it all began. That?s where you kind of fall in love with the game with your friends and your hometown,? she says. ?It was a great honor for me and also an honor to be around high school basketball. They?ve been calling me a few years trying to see if I?m around.?

When Smith was awarded Ohio?s Ms. Basketball in 1992, the sport was still a half-decade from the WNBA?s founding and a full decade from the ESPN family of networks covering every NCAA Tournament game. She was at the forefront of a revolution for women?s basketball and women?s sports in general.

Smith, full of humility, still looks up to those who came even before her. She also admires those coming after.

?You think those who were there before you really paved the way and did a lot more than we did,? she says. ?It?s always fun to see high school basketball and high school sports in general, they?re on ESPN now. There?s so much more to it.?

Along with her commitment to basketball, Smith is a success in the academic world. After receiving a Bachelor?s of Arts in life and human sciences during her undergraduate life, Smith returned to Ohio State in 2011. Over the course of three years, she earned a Master?s degree in medical dietetics.

?Before basketball took off as an undergrad, I expected to go to medical school,? Smith says.

If Smith passes her RD Exam, she can become a registered dietician. Although she is not sure if she is interested in one-on-one counseling, community wellness or another area, she is grateful for her accomplishment.

?I didn?t want coaching to be my only option, so nutrition and medical dietetics was something I enjoyed.?

For right now, Smith is into coaching. After spending three years as a graduate assistant at Ohio State while finishing her Master?s studies, Smith recently began her first season as an assistant coach for the New York Liberty of the WNBA. Smith played her final WNBA season with the Liberty in 2013.

Smith played in 34 games last season (started 30) and average 6.1 ppg. While the numbers were not close to those of her prime, they still showed Smith could play. However, she does not feel any regret being in formal attire this season.

?I was able to say when I wanted to be done,? she says. ?I had a long career. I don?t really have an itch to play. I?m really excited to be on this side. My body and my mind feel fine not to play.?

Smith laughs off her realization being a coach actually entails a greater time commitment than being a player. She spends much of her time outside practice watching film and being in coaches? meetings.

"He?s a competitive guy. He?s a thinker. We?re similar in a lot of ways," Smith says. "It?s easy to work with someone who you respect and you have a history with and get along with. Bottom line is he wants to win and how best to get to that place, let?s do it."

The Liberty are off to a 1-2 start with Smith behind the bench alongside Laimbeer. Coaching is Smith's primary focus nowadays, but she may soon add a future in nutrition and medical dietetics. She also says she is always willing to help out in the community whenever necessary.