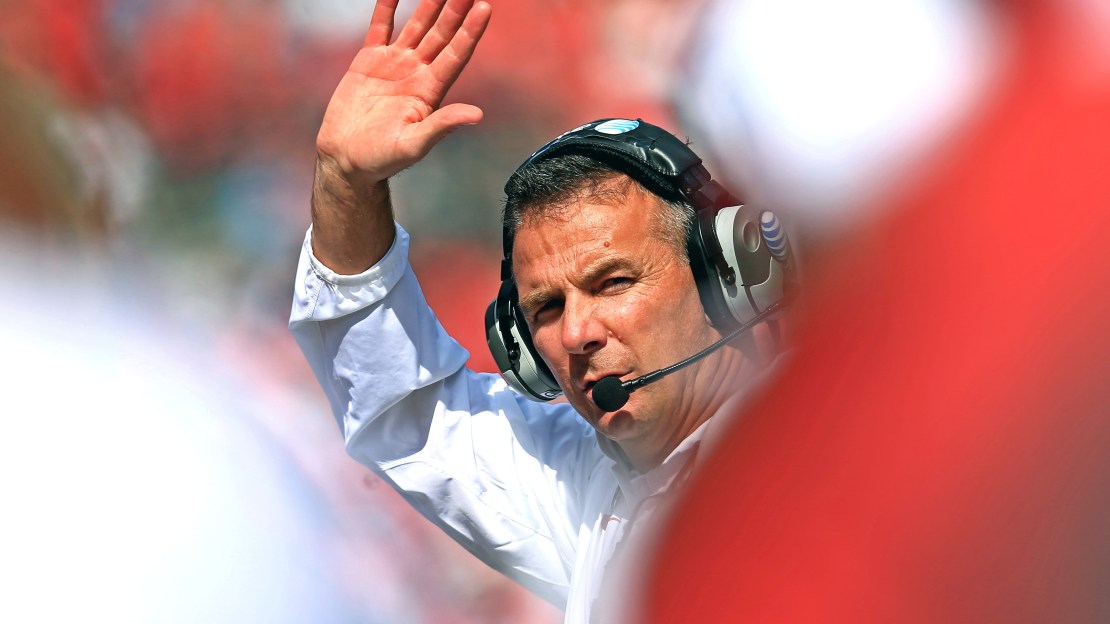 Meyer and OSU welcome back a lot of talent. The offense teems with skill, led by quarterback Braxton Miller. But the line must replace four starters. The defense will be led by the best line in the Big Ten, but the back seven has been reworked. And new co-defensive coordinator Chris Ash has been tasked with fixing a leaky pass defense.

Still, there is a lot to like about this edition of the Buckeyes-including the schedule.

Toughest non-conference game: The visit from Virginia Tech on Sept. 6 will be a fun clash. The Hokies are famous for their strong, aggressive defense, killer special teams and physical offense, but they will be breaking in a new quarterback. OSU and Va Tech never have played. The Buckeyes will have a tough tune-up, playing on the road vs. Navy to open the season. The Midshipmen?s triple-option offense can be confounding. Ohio State is 4-0 all-time vs. Navy, last playing in 2009 in Columbus.

Toughest conference game: The junket to East Lansing on Nov. 8 could be for all the marbles in the Big Ten East with a berth in the league championship game on the line. The Buckeyes lost 34-24 to Michigan State in the Big Ten title game last season, ending Ohio State?s 24-game winning streak and trashing its national title hopes. The Buckeyes won the last time they visited Spartan Stadium, taking a 17-16 decision in 2012.

Who they don?t play: Ohio State misses all of the top teams in the Big Ten West, with Nebraska, Iowa and Wisconsin off the to-do list. The Buckeyes also won?t play Purdue and Northwestern.

Easiest game: Visits from Rutgers and Illinois don?t figure to be too daunting. But, let?s go with the Kent State game. The Golden Flashes come to Columbus on Sept. 13 in what looks like little more than a glorified scrimmage. The teams have played twice all-time, with the Buckeyes winning in 2002 and 2007 by a combined score of 99-20.

Rugged stretch: Nothing looks too overwhelming. If a stretch has to be picked, the last four games of the season look most perilous. The run begins with a trip to Michigan State on Nov. 8. A visit to Minnesota is next. OSU is 43-7 all-time vs. the Golden Gophers, winning the last eight games and 24 of 25. But Minnesota is on the rise and dangerous. That?s followed by a visit from Indiana and its prolific offense that has posed Ohio State some issues in recent years. IU scored just 14 points last year vs. OSU but tallied 49 in 2012. And the run concludes with Michigan coming to Columbus in the finale.

Factoid: Since Indiana beat Ohio State back-to-back in 1987 and 1988, the Buckeyes have ripped off 20 victories in a row with a tie thrown in (1990). And victories often have been in dominating fashion.

Best chance to be upset: Yes, Ohio State has dominated Michigan recently in ?The Game,? winning 11 of the last 13 encounters. And the Buckeyes haven?t lost in the Shoe to the Wolverines since 2000. Still, it?s a rivalry game. And, we all know what can happen in those-especially Ohio State, which saw Michigan trash perfect Buckeye seasons in 1993, 1995 and 1996. Giving the Wolverines even more juice may be the fact Brady Hoke could be coaching for his job.

Best chance to pull an upset: Ohio State won?t be an underdog often. In fact, it may only happen when the Buckeyes play at Michigan State on Nov. 8. The Spartans have won two of the last three in the series after losing seven in a row to Ohio State.

Must win: Again, it is the Michigan State game. Ohio State?s trek to East Lansing probably will shape up to be a de facto Big Ten East championship game. It will be fun to watch Braxton Miller and the Buckeye offense battle the always tough Michigan State defense. And does it get any better than Urban Meyer vs. Mark Dantonio?

Bye weeks: These are spaced and timed poorly. The first bye comes after the third game, falling between visits from Kent State and Cincinnati. That may be a bit early. The Buckeyes play just two more games before the second bye, which comes after a trip Maryland and before a visit from Rutgers. That means Ohio State will close the season with seven games in a row.