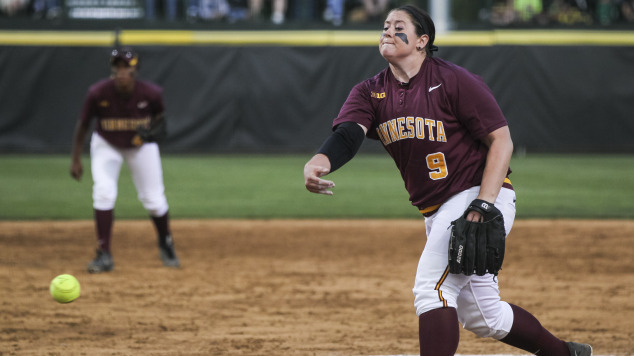 The 16th-seeded Minnesota softball team fell in its first-ever NCAA super regional game Saturday night, dropping a 10-2 decision in six innings to No. 1 Oregon at Howe Field in Eugene, Ore. The loss, which dropped the Gophers? 2014 record to 44-11, occurred before a Howe Field-record 1,954 fans.

After losing in its first meeting with the Ducks since 2003, Minnesota is now 5-4 all-time against Oregon.

For the 41st time this season, the Gophers got on the scoreboard first. Sam Macken notched the game?s first hit and stole second, setting the stage for fellow freshman Sara Groenewegen to register her 42nd RBI of the season with a single to right field.

Entering the evening, Minnesota was 38-2 when scoring first and 22-1 when putting up a run in the first inning.

The Gophers? lead was short-lived, however, as Oregon?s Courtney Ceo led off the bottom of the opening frame with a solo home run. The Ducks put two more runners on base, but Minnesota starting pitcher Sara Moulton limited the damage and got out of the jam with the score tied at one.

In the second inning, Oregon tacked on a pair of runs with a two-RBI double by Nikki Udria and made the score 5-1 when two Gopher errors on the same play allowed Udria to come around and score and turn a Ceo single into an unearned run.

The Ducks scored three more times in the third, including two more unearned runs, to extend their lead to seven. Tyler Walker tied Groenewegen and Taylor LeMay for the team lead in home runs with a solo shot in the fifth, but Oregon scored twice more in the bottom of the sixth to implement the rule and end the game.

Walker?s home run was the 32nd of her career, the third-most in program history.

The teams will play Sunday at 4:04 p.m. CT on ESPN in the second game of the series. Should the Gophers win that game, there will be a decisive third game that will start no earlier than 7:04 p.m. CT on ESPN2.

Read the complete recap at Gophersports.com.