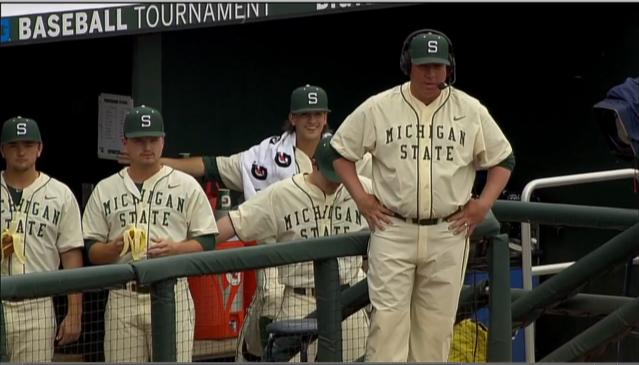 Videobombing has become the biggest trend during this year's Big Ten Baseball Tournament. We have seen both silly and serious videobombs from Indiana, as well as a Minnesota player getting a fake tattoo drawn on his arm in the middle of an interview. Well, Michigan State's videobomb in Saturday's semifinal matchup against Indiana could be the best one yet.

Between innings, BTN's Eric Collins and Danan Hughes interviewed Michigan State head coach Jake Boss Jr., but it was the shenanigans going on behind the coach that stole the show.

We saw players pretending to do some cross country skiing, a group of players eating bananas and simultaneously staring into the camera, and then, my personal favorite, was a player pretending to be riding a bike with the help of his teammates.

"It appears your team is still loose," Collins said to Boss Jr. at the conclusion of the interview.