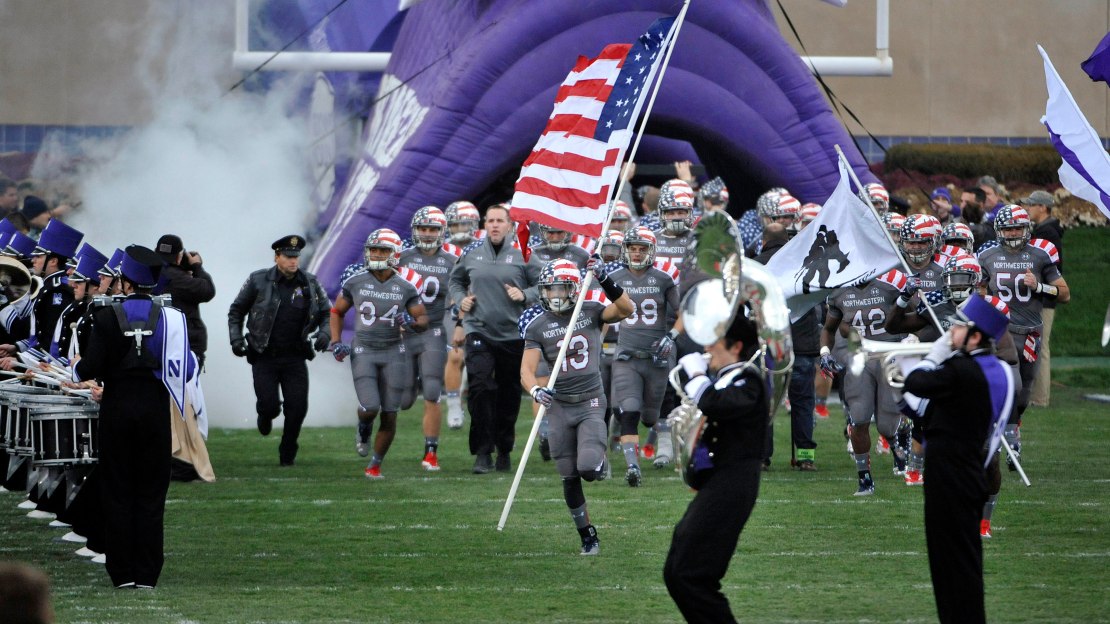 Last year began amid much hope for Northwestern, which opened 4-0 with No. 4 Ohio State coming to Evanston for a prime-time national TV. Alas, Northwestern lost, 40-30, and never recovered.

From there, the Wildcats lost seven in a row – including one in overtime, another in triple overtime and two other games by three points – before beating Illinois in the finale. A 5-7 mark (1-7 Big Ten) ended the team's school-record run of five bowls in a row.

The Wildcats return many key veterans and will be motivated. The offensive line must improve, while the defense needs more big plays. However, this schedule doesn?t look to do NU any favors, as getting to six wins may be difficult.

Here?s a breakdown of the Wildcats? 2014 schedule.

Toughest non-conference game: It?s rare for a Big Ten team to play a non-league game in November. But Northwestern travels to Notre Dame on Nov. 15. The teams haven?t met since the Wildcats famously went to South Bend in 1995 and stunned the Fighting Irish, 17-15, behind Pat Fitzgerald. That was an opening salvo in NU?s improbable march to the Rose Bowl.

Toughest conference game: You could make the case for several games. But let?s go with the trip to Iowa on Nov. 1. NU has lost its last two junkets to Iowa City, getting beat there 17-10 last season. This is a loaded Hawkeyes team that will be tough to top in Kinnick Stadium. Can Northwestern match Iowa?s strength in the trenches?

Who they don?t play: Northwestern gets a big break by missing Ohio State and Michigan State. The Wildcats also don?t play Indiana, Rutgers and Maryland, teams you would think NU would have a good chance to beat.

Easiest game: The Sept. 20 visit from FCS Western Illinois should provide relief after the season opens with visits from Cal and Northern Illinois. The Wildcats could use this breather vs. the Leathernecks.

Rugged stretch: From Sept. 27-Nov. 15, Northwestern will have its work cut out for it during a challenging seven-game stretch. It begins with a trip to Penn State, on Sept. 27, then sees Wisconsin come to Evanston. After that, NU goes to Minnesota, welcomes Nebraska, goes to Iowa and welcomes Michigan. The stretch is capped by the trip to Notre Dame. Bottom line: Northwestern doesn?t figure to be favored in any of these games. Can it go 2-5?

Factoid: Northwestern has won each of the last three meetings vs. Wisconsin at Ryan Field. The Badgers? last win in Evanston? It came in 1999, a 35-19 decision with Ron Dayne rumbling for 162 yards and two scores.

Best chance to be upset: Illinois may be playing for a bowl bid when it visits Ryan Field in the season finale on Nov. 29. The Fighting Illini have been on the short end of this rivalry of late, as NU has won the last two meetings and eight of 11. Illinois hasn?t won in Evanston since 2002. (The Illini won in Wrigley Field in 2010.)

Best chance to pull an upset: Nebraska should be favored when it visits on Oct. 18. And if the last three games are any indication, this clash should be memorable. The Wildcats held on for a thrilling 28-25 win in Lincoln in 2011. The Cornhuskers returned the favor in 2012 with a stirring 29-28 comeback in Evanston. Last year, Nebraska won on a last-second Hail Mary. No doubt, Northwestern doesn?t fear the Huskers and has lots of talent back from a team motivated to rebound from a disappointing 2013.

Must win: To go to a bowl, Northwestern probably has to win at Minnesota on Oct. 11. The Golden Gophers stole one in Evanston last season, taking a 20-17 win, as Minnesota is threatening to surpass NU in the pecking order of the Big Ten West. Prior to that defeat, the Wildcats had won three in a row and five of six vs. the Gophers. NU has won its last three trips to Minneapolis.

Bye weeks: The first one comes too early, landing on Sept. 13 after the Wildcats have played just two games. The second bye comes after seven games, following Nebraska?s visit on Oct. 18. The timing is good, as the bye breaks up the brutal aforementioned seven-game stretch for NU. The break will allow Northwestern to regroup to finish the season, beginning with a tough trip to Iowa, as three of the last five games are on the road.