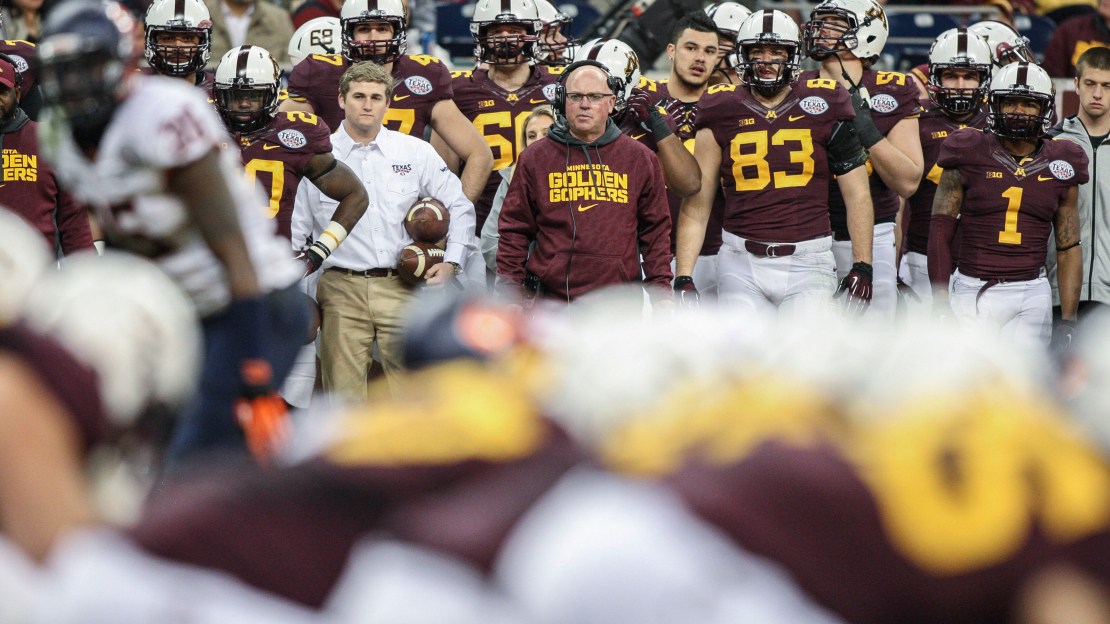 The hype surrounding the Ohio State defensive line already is building. And with good reason. The unit may be the best in the nation, headlined by Noah Spence, Michael Bennett and Joey Bosa. In fact, all three of these guys could be first-round draft picks.

Bennett could be a top-10 pick, something the Big Ten hasn?t had since 2008. That same year, ex-Buckeye DE Vernon Gholston went No. 6 after ex-Wolverine OT Jake Long went No. 1. I can?t wait to what this OSU front, which should back the Buckeye back seven good because of the havoc it can create.

While he recouped from health issues last season, Minnesota?s Jerry Kill coached from the press box. Well, he plans to work from the sidelines this fall. And that?s great to hear.

?I?ll be on the sideline [this fall],? Kill said. ?That?s who I am, and I think that?s best for our team. However, if we need to adjust something, [the coaches have] all been together a long time.?

Pac-12 commissioner Larry Scott and Big Ten boss Jim Delany recently talked about autonomy for the ?power five? conferences. This is gonna happen. You know how things work in life: The biggest, riches entities almost always get what they want.

Scott said there is "broad support" to let schools from the five major conferences – which also includes the SEC, ACC and Big 12 – decide how their own legislative process works in many areas affecting their athletes. Delany said "I hope we can develop some momentum and act, and act in a way that maybe we haven't been able to act over the last 25 years."

Today is the day when the College Football Hall of Fame will announce its latest class. Among the candidates are three former Michigan stars: Mark Messner, Rob Lytle and Jumbo Elliott. Among that trio, I think Messner is most deserving.

It?s gonna be fun to watch former Michigan State QB Brian Hoyer battle Johnny Manziel for the Browns quarterback job in one of the most watched position battles of the summer/preseason.

Every coach conducts his practice schedule differently during the season. Penn State?s James Franklin will have his crew practice on Sundays and be off on Mondays. Typically, schools take off Sundays and work on Mondays.

Not long ago, I broached the subject of the Big Ten playing a 10-game league schedule.

Look who agrees with me: Kirk Ferentz!

?Scheduling has become a real issue,? he said. ?With some policies that are in place right now, it makes it more and more competitive.

?I know we?re paying more money than we ever have for people to come to Kinnick (Stadium) and that?s a result of the system we have.

?So to that end, maybe a 10-game schedule is realistic.?

The great Marcus Jackson of the Champaign News-Gazette held a chat recently. And Darius Paul was a hot topic.

I?ll leave you with another edition of the Hlog Digest from Mike Hlas of the Cedar Rapids Gazette.

Enough said. So, when a watch list appears in your email in-box, just delete it.