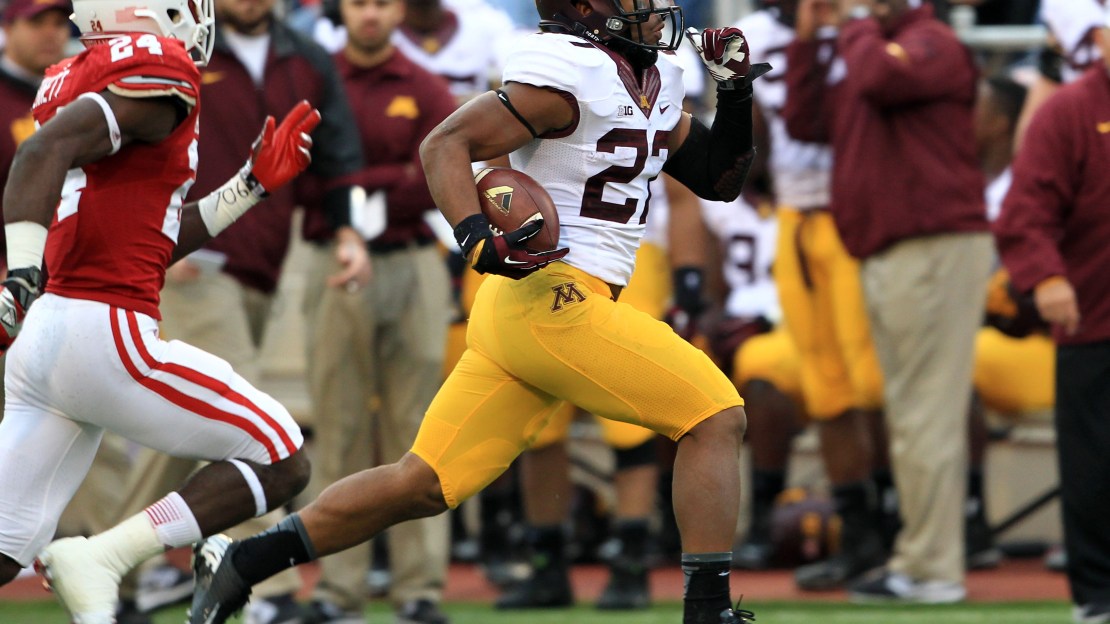 Jerry Kill has Minnesota on the rise. His win total has improved in each of his three seasons in the Twin Cities, going from three, to six to eight victories with bowls in each of the last two seasons. The best looks like it is yet to come.

The Golden Gophers have a chance for more success with seven starters back on both sides of the ball. What?s it all mean? Minnesota may be a dark horse in the Big Ten West division.

This is a team that?s developed toughness on offense, but the passing game needs more pop. The defense? It was one of the most underrated units in the Big Ten last year but still needs more playmakers.

Here?s a breakdown of Minnesota?s 2014 schedule, which looks built for a third consecutive bowl trip.

Toughest non-conference game: No doubt, going to TCU on Sept. 13 will be difficult. Yes, the Horned Frogs are coming off a 4-8 record. Still, Gary Patterson has a top-flight Big 12 program that?s always physical and always plays hard. As a sidebar, Patterson and Kill are best buddies. So, there?s that. The Gophers have two home games as tune-ups, playing FCS Eastern Illinois and Middle Tennessee State. So, that will help.

Toughest conference game: The season ends with a killer 1-2 punch of road games at Nebraska and at Wisconsin. So, take your pick of either of those games. Let?s go with the battle for Paul Bunyan?s Axe. The Badgers have thoroughly dominated the Gophers of late, winning the last 10 meetings and 17 of 19. Minnesota?s lone victories in that span came in 2001 and 2003. The Gophers haven?t left Madison with a win since 1994.

Who they don?t play: Minnesota misses Penn State and Michigan State. That?s good. But the Gophers also don?t play Indiana, Rutgers or Maryland, teams it would have a good chance to beat.

Easiest game: Let?s go with the season-opening visit from FCS Eastern Illinois, the alma mater of Tony Romo, Sean Payton and Mike Shanahan. Minnesota takes on the Panthers on a Thursday night, offering a nice tune-up to the season. In the past, games like this could trip up Minnesota. Who can forget the home losses to North Dakota State in 2007 and 2011? But, those days likely are over in Year Four under Kill.

Rugged stretch: The schedule ends with a massive four-game bang, making November a likely make-or-break month. The month begins with visits from Iowa and Ohio State and ends with trips to Nebraska and Wisconsin. That's as tough as any stretch in the Big Ten. In a scheduling quirk, this will be Iowa?s fourth trip in five years to Minnesota. Iowa is 1-2 in its last three junkets to Minneapolis. Minnesota is 7-43 all-time vs. Ohio State, losing the last eight games and 24 of 25. The only win in that span was in 2000. Minnesota had lost 16 in a row to Nebraska before beating the Cornhuskers last year, 34-23. The Gophers? last win in Lincoln was in 1960.

Best chance to be upset: Minnesota needs to be careful when it goes to Illinois on Oct. 25. Yes, the Golden Gophers have won the last three meetings and four of five. And they also have won their last four trips to Champaign and are 10-3 in the last 13 games vs. the Fighting Illini. But Illinois is getting better and could be equipped to win a shootout.

Best chance to pull an upset: Minnesota could bring home Floyd of Rosedale when Iowa visits the Twin Cities on Nov. 8. No doubt, a win vs. the Hawkeyes would give Minnesota needed mojo as it embarks on a monster November. Minnesota will be helped by a bye the week before Iowa?s visit. Can the Gophers? match the physicality of the Hawkeyes?

Must win: To be an upper-division Big Ten West squad, Minnesota needs to beat visiting Northwestern on Oct. 11. The Gophers won 20-17 last year in Evanston, ending a three-game losing streak in the series. Minnesota hasn?t won two in a row vs. the Wildcats since a three-game run from 2002-04. And 2004 is the last time the Gophers beat Northwestern in Minneapolis.

Bye weeks: The timing of both byes is good. The first comes after five games following a trip to Michigan for the Little Brown Jug. Minnesota will play just two games before its next bye, which comes after the trip to Illinois. That will allow Minnesota extra time to prep for a big November that figures to make or break the Gophers? season.