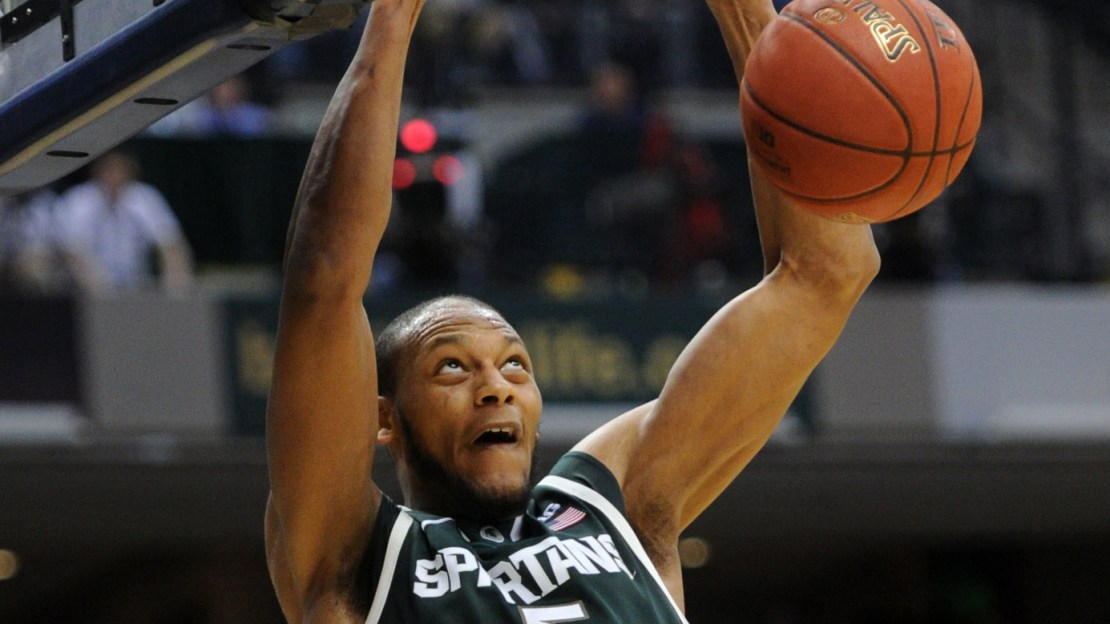 Here is something to prime the pump for the coming football season: a slideshow featuring the Big Ten?s best players. Who?s No. 1 on the list? Oh, c?mon ? you know. Hint: It?s a Buckeye.

There are lots of Huskers on the list, too. Thanks, Lincoln Journal Star!

With the NBA draft lottery in the books-I was convinced somehow the Lakers or Celtics would win-these mock drafts take on another dimension. My old pal Sean Deveney of Sporting News has his latest offering out.

Looks like KU?s Andrew Wiggins will be No. 1 to Cleveland, which has the top pick for the third time in four seasons. (Go ahead and groan.) But, there are many good players in this draft, so anyone in the top 10 will get a nice player. As for the Big Ten, Indiana?s Noah Vonleh almost assuredly will be the first player gone.

Michigan State?s Adreian Payne is one of the NBA?s oldest prospects. Still, he feels he has room to improve.

The 23-year-old Payne didn?t start playing hoops until eighth grade, so he still has room to develop.

?I feel like I have a lot of room to grow because I started playing basketball late,? Payne said. ?I?m just open-minded. I haven?t been playing the game that long so I have a lot to improve in.

?I got better in a short period of time, and look at me now, I became a great player. So just imagine what I can do if people invest more time in me.?

Count Graham Couch of the Lansing State Journal among those who hated the emphasis on calling fouls last season in college hoops. And, I have to agree.

The idea was to create a free-flowing game that allowed great athletes to be great athletes. The result: myriad free throws. BORRRRRRR-ING.

The attrition on the Michigan hoops team is well-documented, with guys like Glenn Robinson III, Mitch McGary and Nik Stauskas all gone. One player who must step up is Derrick Walton Jr., who showed nice development as a true freshman point guard last season.

Rick Brown of HawkCentral.com takes a look at who will rise and who will fall in Big Ten hoops next season. Who does Brown think will win it all? Ah, c?mon. You know. Think cheese.

Bob Flounders of Pennlive.com caught up with Penn State wideout Eugene Lewis on the Nittany Lions caravan. No PSU player may be watched closer in the early going next season than Lewis, as he tries to replace stud Allen Robinson.

"Yeah, for sure. Jordan Lucas is a great player," said Lewis, who caught 18 passes for 234 yards and three touchdowns last season.

"I think he's one of the best players I've seen develop since I got here. He's definitely somebody I'm going to go up against in practice all the time."

Want some football Xs and Os on your Wednesday? Here?s some good stuff that shows how Ohio State offensive coordinator Tom Herman uses run/pass options to punish defenses that like to cheat or hedge.

This stuff from Eleven Warriors is terrific.

I can?t wait to see the redshirt freshman Iowa wideouts. They hold the key to this offense and Iowa?s quest to win the Big Ten West.

Matt Daniels of the Champaign News-Gazette takes a look at the Illinois quarterbacks, who aren?t slowing down this summer.

It will be fun to watch Wes Lunt, Reilly O?Toole and Aaron Bailey battle for the job. But, if Lunt doesn?t win, I?ll be surprised. Tim Beckman said there is no timeline when he will name a starter. It?s all about the competition.