NBA Draft: Which B1G player is most NBA-ready? 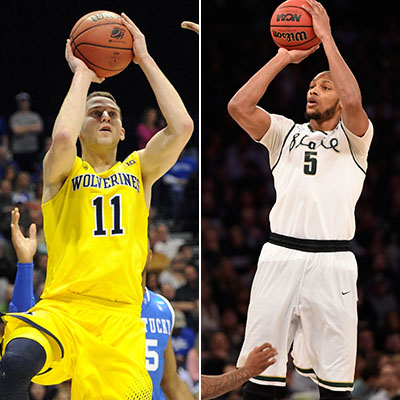 The 2014 NBA Draft is quickly approaching as teams across the league are setting their draft boards in preparation for June 26th. The Big Ten is expected to be well-represented this year, as Gary Harris, Nik Stauskas, Adreian Payne, Mitch McGary and Glenn Robinson III have all appeared in the first round of various NBA mock drafts.

That got me thinking: Which of these former Big Ten standouts is the most NBA-ready?

I debated that question with ESPN Basketball Insider Jeff Goodman, and here's what we got.

[ MORE: Which NBA teams have the most picks over the past 10 drafts? ]

Jeff Goodman, ESPN.com
SG Nik Stauskas, Michigan: NBA guys will be able to throw Stauskas in an NBA game because he does one thing extremely well — makes perimeter shots — but he does more than just that. Stauskas will thrive in pick and roll situations in the NBA because of his high basketball IQ. Stauskas makes good decisions, can really shoot it, has good court vision and also has the size for a two-guard. He also possesses a cockiness than you need to thrive at the next level. The biggest question for Stauskas is his ability to defend at the next level, but there are plenty of guys who don't guard in the NBA.

Sean Merriman, BTN.com
PF Adreian Payne, Michigan State: In my opinion, there are three main factors when looking at prospects who are truly NBA-ready: Experience, size and overall skill-set. Payne gets an A+ in my book in all three of those categories. He played four years at Michigan State under Tom Izzo and improved drastically every season he was there. At 6-10, 240 pounds, Payne has ideal size to play power forward at the NBA level, and he has a great inside-outside game, which should allow him to thrive at the pro level. He also excels on both ends of the court, ranking among the Big Ten leaders in scoring, rebounding, field-goal percentage, 3-point percentage, free-throw percentage and blocked shots. If I'm an NBA executive who is drafting somewhere in the 10-15 range, I wouldn't think twice about selecting this guy. He has all the tools to make an immediate impact in the NBA.