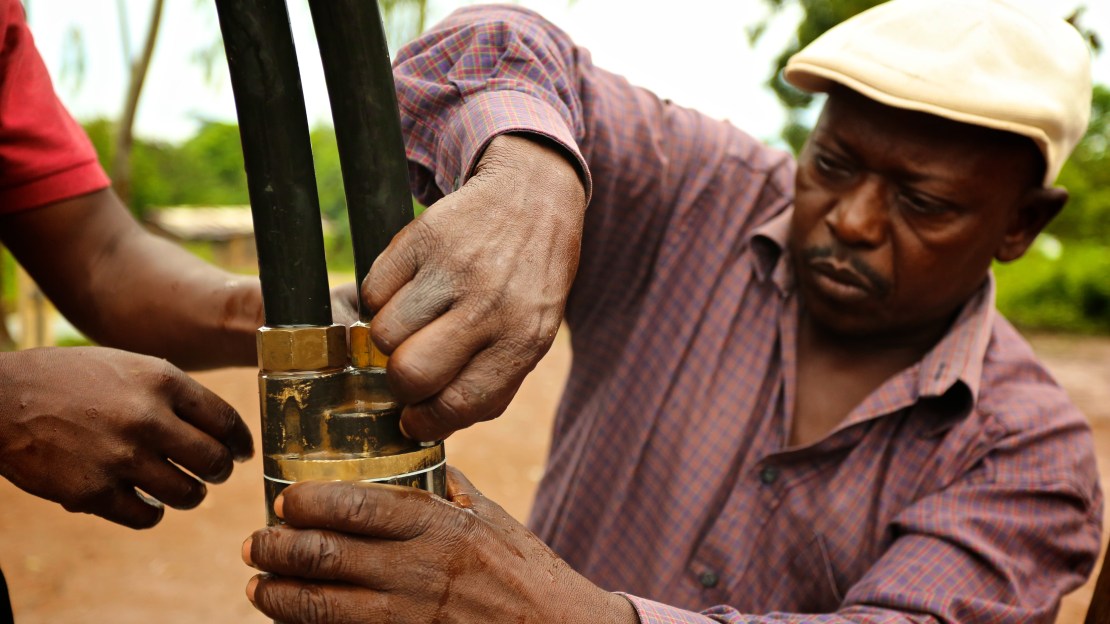 It is one of the world's poorest countries, and it sits in the middle of a crisis that sees attacks on entire villages, forcing people to flee with little or nothing from their homes when armed militants arrive at their doorstep. Human rights watchers estimate that a million people are displaced from their homes; that represents almost one fourth of the entire population of the Central African Republic.

Working amidst that crisis is an Indiana-based non-profit group, Water for Good. They employ 90 nationals who are still working to relieve suffering and rebuild lives. Under the executive direction of CEO Jim Hocking, the predominantly Central African team is out drilling and maintaining wells, distributing seeds for the farmers to sow, and trying, desperately, to give the population continued access to clean water and food.

From the beginning, Hocking wanted the Water for Good program to be self-sufficient.  The goal was to have local villages be able to help maintain and financially support repairs on their well.  Working with the local population was critical to the long-term viability of the program. The Water for Good team was to be staffed by Central Africans, trained on the job and allowed to learn and manage the organization as leadership voices of the team. To that end, Hocking has succeeded.  The team continues to function, even in the dire situation that exists across the country.

Villagers work together to cover some of the costs of well maintenance, because they recognize the value it provides to their community. The rest of the funding comes from grants and contracts and direct contributions from individuals and organizations. But with the war, contract and grant funds are decreasing and the costs are rising.  Transport to the CAR, the costs of the supplies, and identifying routes that navigate the current risks have created additional financial pressures for Water for Good.

In response to the financial pressure and increasing needs of the people, Hocking developed a year-long LOVE NOW campaign aimed at raising support to help meet the immediate needs of the people and bolster the team?s capacity to work. Hocking explained, "Love Now provides much needed support for the national staff. It allows us to keep the staff paid so they can provide seed for farmers and keep the trucks rolling, so the team can keep drilling new wells and fixing the broken ones."

Hocking also sought partnership with Purdue University to see how Water for Good could logistically solve their problems. With assistance from some Purdue Krannert School of Management students, Water for Good expanded the approaches they use to get needed equipment into the country. With the unpredictability of shipping routes and air transport, the Krannert students helped devise other ways to get needed parts into the CAR so that the wells could be maintained.

Hocking said, ?The value of that relationship is that they showed us how to expand our vision.  Not all the methods we developed have worked, but some did, and we keep trying others.?

So far, Water for Good has supplied access to clean water to 500,000 people. They have installed or rebuilt more than 1300 wells.  During this year alone, in the height of the conflict, Water for Good has helped install 400 latrines and removed 147 tons of garbage in order to assist families living at the largest refugee camp in the country.

Adrienne Lane, Director of Development, noted the accomplishments of the team. ?Our well-drilling teams have resumed operations and are working in and around the war-torn town of Bouar. Our water pump maintenance teams have visited hundreds of villages, fixing pumps and demonstrating to these remote villages that they are not forgotten. We distributed over 17 tons of agricultural seeds to farmers who had lost their seeds in the midst of the conflict. Over 70% of the population relies on subsistence agriculture to survive.?

The other goal of Water for Good is to keep the population from despairing that they are forgotten by the outside world. Lane explained that Water for Good also provides valuable news, ?The short-wave radio station, based in Boali about 100 kilometers northwest of the capital Bangui, is conveying a message of hope and reconciliation, and reporting on reconciliation meetings that have taken place in the capital city.?

With all that has taken place in the last year, it will take a long-term commitment and vision to improve conditions for the Central African people. Hocking grew up as a child of missionaries in the CAR and remained there as an adult until the war pressed in and he needed to move his family to safety. When asked what the future holds for the people of the Central African Republic, Hocking expressed heartfelt concern for the people he lived with for most of his life, "I know if the right people hear this message, we can make the difference.  These are hard-working people, working the land by hand.  They will continue to help themselves, if the fighting can end. They are mistreated, shot, their homes are burned."

But Hocking is optimistic that it can be turned around. "These are difficult times but the people have not given up. Our staff has not given up and they will make a difference in the long run."

To support Water for Good, please go to http://waterforgood.org/lovenow