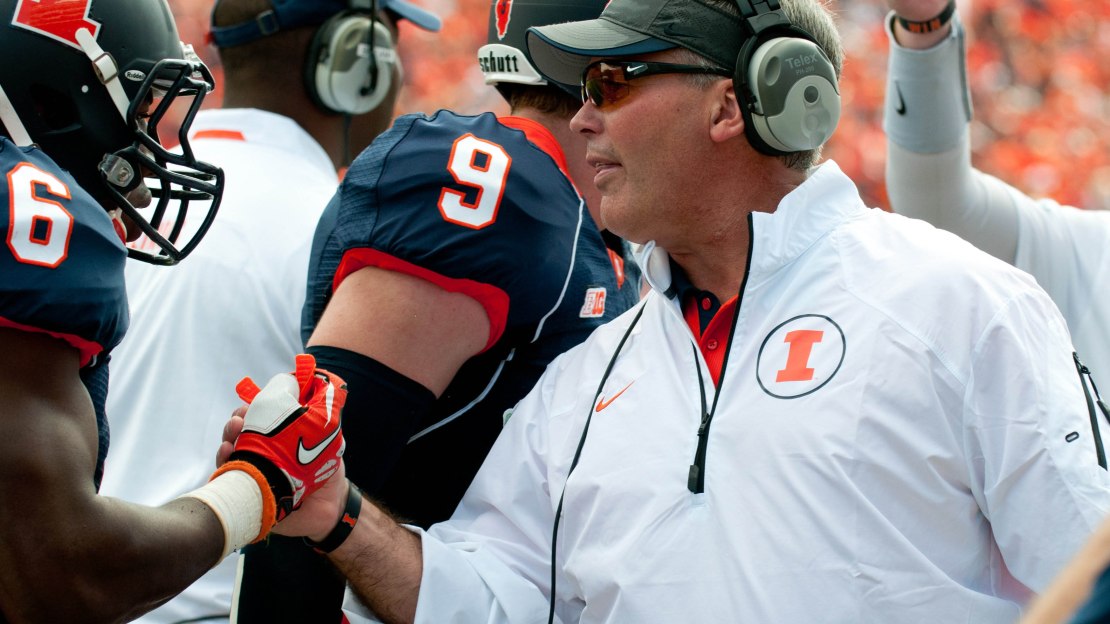 As Year Three of the Tim Beckman era downs, a sense of urgency has set in around Champaign-Urbana. When will Beckman deliver a bowl?

Since arriving from Toledo amid a glow of hope after the Ron Zook era was unplugged, Beckman has gone 6-18 overall and 1-15 in the Big Ten. And that lone conference triumph came last year vs. a Purdue team that went 0-8 in the Big Ten and 1-11 overall.

But progress was made in 2013, especially on offense. (Thank you, offensive coordinator Bill Cubit.) If the defense comes around, Beckman could break through to the program?s first bowl since 2011. No doubt, this schedule will offer ample help toward that cause. A 6-6 record looks doable ? but it may be a close call.

Here?s the first of my 14 schedule breakdowns.

Toughest non-conference game: A Sept. 13 trip to Washington will be a good test. The teams met last season in Chicago?s Soldier Field, with the Huskies taking a 34-24 victory to be a buzzkill to a 2-0 Illinois start. The Illini won just two times after the loss to U-Dub, killing the party mood along Green Street.

Toughest conference game: Going to Ohio State on Nov. 1 won?t be a treat. The Illini have lost six in a row and are 1-9 in their last 10 games in the battle for Illibuck. OSU scored 60 points on Illinois last year and 52 in 2012. You get the picture. The Illini?s last win vs. Ohio State came, ironically, in Columbus in 2007, when Juice Williams led a monster 28-21 upset of the No. 1 Buckeyes en route to taking Illinois to the Rose Bowl. That seems like 50 years ago, doesn?t it?

Who they don?t play: Missing Michigan State and Michigan from the East is nice. Alas, Illinois also doesn?t play Rutgers, Maryland and Indiana from the other division.

Easiest game: A season-opening visit from FCS Youngstown State should offer the chance to shake those orange and blue pom-pons fast and furiously. But don?t take the Penguins too lightly. This is a strong program that won at Pitt in 2012 and went 8-4 last season with a 55-17 loss at Michigan State. By the way, Youngstown State is coached by Eric Wolford, who coached the Illinois offensive line from 2007-08 under the Zooker.

Rugged stretch: November. All of it. The month starts with a cold, three-arm shiver of games at Ohio State, vs. Iowa and vs. Penn State. This will be the first time Illinois has played Iowa since 2008. And the season ends with a trip to Northwestern, which has won two in a row vs. the Fighting Illini and eight of the last 11 meetings. This has to just kill Illinois fans. Bottom line: Illinois needs to be at least 5-3 entering November because going 2-2 in these last four games may be asking too much. A 1-3 mark? That?s possible-but still will be a challenge.

Factoid: Minnesota has won its last four trips to Champaign. The last Gopher loss in Memorial Stadium was a 25-14 decision in 2001, when Illinois went to the Rose Bowl under Ron Turner.

Best chance to be upset: Illinois won?t be favored in many games. But one of them should be on Oct. 4, when Purdue treks west on I-74 toward Champaign in the battle for the Cannon. The Illini?s lone Big Ten win last season came at Purdue-and the Illini had to hold on for dear life for a 20-16 victory vs. arguably the worst team in Boilermakers history. In fact, that?s the only conference win for Tim Beckman in two years on the job. Purdue will be better. It has to be. And, you know it?ll think it can win this game. The Boilers are 7-2 in the last nine meetings with Illinois and are 3-1 in their last four trips to Chambama.

Best chance for an upset: Hard to say what teams will look like by November, but Illinois could have a shot to dump visiting Penn State on Nov. 22. The Nittany Lions? thin roster could be depleted for a squad that possibly may be playing out the string under first-year coach James Franklin. And the Illini could be making a bowl push. Hey, it?s a long shot ? but it could happen. But know this: PSU has won the last two meetings by a combined score of 59-24. Illinois came close to winning last year in State College, falling 24-17.

Must win: If this is a bowl team, Illinois must beat visiting Minnesota on Oct. 25. As a matter of fact, a loss here may kill the program?s bowl hopes. Yes, the Illini play at Wisconsin the game before, but Illinois has a bye after the trip to Madison. So, with two weeks to prep, the Illini should be ready to pay back a Golden Gophers? squad that has won the last three meetings and four of the last five vs. the Illini. Even worse: Illinois is 3-10 in the last 13 games vs. the Gophers. This must end for Illinois to evolve as a program.

Bye weeks: Decent spacing here. Illinois will open with seven consecutive games before its first by on Oct. 18. Ideally, the Illini will be 4-3 at the very least at that point. The Fighting Illini will play two games and then have another bye on Nov. 8. Illinois then closes the season with three games in a row when it could be making a run at a bowl.