Dienhart: A look at cross-division foes, from 1-14 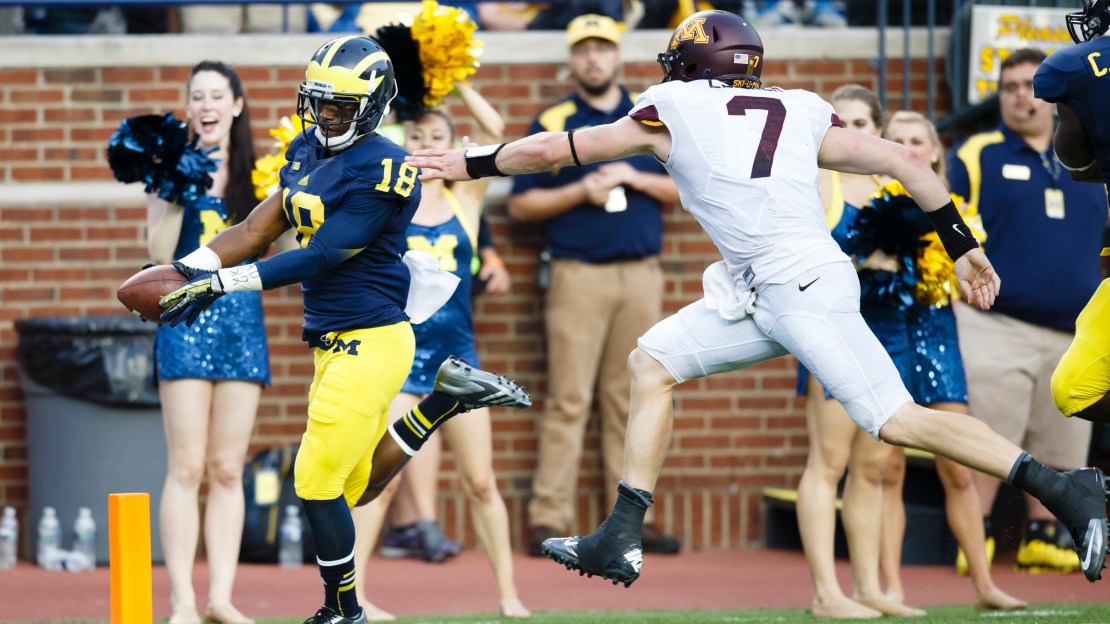 The Big Ten has altered divisions for 2014, going to an East-West format that is geography based after three seasons of the ?competitive-balanced? Leaders and Legends Divisions. Each school will play the six other schools in their division, plus two cross-division foes. Not all cross-division foes are created equal, though, and I rank the draws in this post.

To review, here?s how the divisions will look as the Big Ten goes to 14 teams with Rutgers and Maryland coming aboard:

Here?s my ranking of the 2014 Big Ten cross-division opponents, from easiest to toughest.

1. Wisconsin: vs. Maryland; at Rutgers. The re-tooling Badgers get a break by playing not one, but two, Big Ten newcomers. This will be a good litmus test to see if the Terps and Scarlet Knights have the personnel to play this Big Ten bully. The Badgers never have played either school.

2. Iowa: vs. Indiana; at Maryland. The football gods are smiling on the Hawkeyes, who may be Big Ten West favs. The Hoosiers haven?t been to a bowl since 2007 and have defensive issues; the Terps may not be ready for the physical Big Ten and never have played Iowa.

3. Ohio State: vs. Illinois; at Minnesota. The Buckeyes have won the last six meetings vs. the Fighting Illini. The Golden Gophers have been an even easier pushover for the Buckeyes, going 42-7 all-time vs. Minnesota and outscoring the Gophers 1,537-637.

4. Penn State: vs. Northwestern; at Illinois. James Franklin catches a break in his debut. Penn State has ruled the Wildcats, who beat PSU in 2003-04 but not since. The Nittany Lions have won five of the last six vs. Illinois.

5. Indiana: at Iowa; vs. Purdue. A great chance to split for a fast-rising Hoosiers? program. And IU?s offense will give it a good chance for the sweep. Indiana beat Iowa in 2012, the last meeting, and is 3-4 in its last seven meetings with the Hawkeyes. The Hoosiers crushed the Boilermakers last year.

6. Michigan: vs. Minnesota; at Northwestern. This has to make Brady Hoke smile. The Wolverines own the Gophers, with a 38-3 mark in the Little Brown Jug game since 1968. And they seemingly always find a way to beat the Wildcats. Remember last year?s triple-overtime win in Evanston?

7. Northwestern: at Penn State; vs. Michigan. These two games will make Pat Fitzgerald?s job of rebounding from a one Big Ten win season more difficult. The Cats have two victories vs. the Wolverines since 1996. NU hasn?t won in State College since 2004 and is 3-13 all-time vs. PSU.

8. Michigan State: vs. Nebraska; at Purdue. The visit from the Cornhuskers could be a Big Ten title game preview. MSU beat Nebraska last year in Lincoln, its first win ever vs. NU (0-7). But the Huskers won in East Lansing in 2012. A trip to West Lafayette should be no sweat vs. a still-developing Boiler program that can?t matchup with the Spartans in any way, shape or form.

9. Nebraska: at Michigan State; vs. Rutgers. The Cornhuskers won the last time they visited East Lansing, in 2012. This meeting could be one of the best Big Ten games of the season.

10. Purdue: vs. Michigan State; at Indiana. It?s five losses in a row and counting for Purdue vs. MSU. The mojo in the Old Oaken Bucket series is swinging in the Hoosiers? favor after Indiana put up 56 points vs. Purdue in 2013.

11. Illinois: at Ohio State; vs. Penn State. The Fighting Illini have just one Big Ten victory in two seasons under Tim Beckman. This won?t help the Illini?s cause. Illinois is 3-14 vs. the Nittany Lions in Big Ten action. The Illini have lost six in a row and are 1-9 in their last 10 games vs. OSU.

12. Maryland: vs. Iowa; at Wisconsin. Playing in the brutal Big Ten East is bad enough. Throw in these two cross-division foes, and, well, I think you know where I?m going with this. The Hawkeyes and Badgers are physical and tough. Will the Terrapins be ready for this?

13. Minnesota: at Michigan; vs. Ohio State. What did Jerry Kill do to get this draw? Just brutal. The Little Brown Jug seems to be on permanent display in Ann Arbor, as Minnesota has won it only twice since 1977. Since beating OSU in 1981, the Gophers have a 1-24 mark in the series. Nuf said.

14. Rutgers: at Nebraska; vs. Wisconsin. This is a monster 1-2 punch for the newbie Scarlet Knights. Rutgers and the Cornhuskers have met once, a 28-0 Huskers? win in 1920. Rutgers never has played the Badgers, who figure to be too physical.