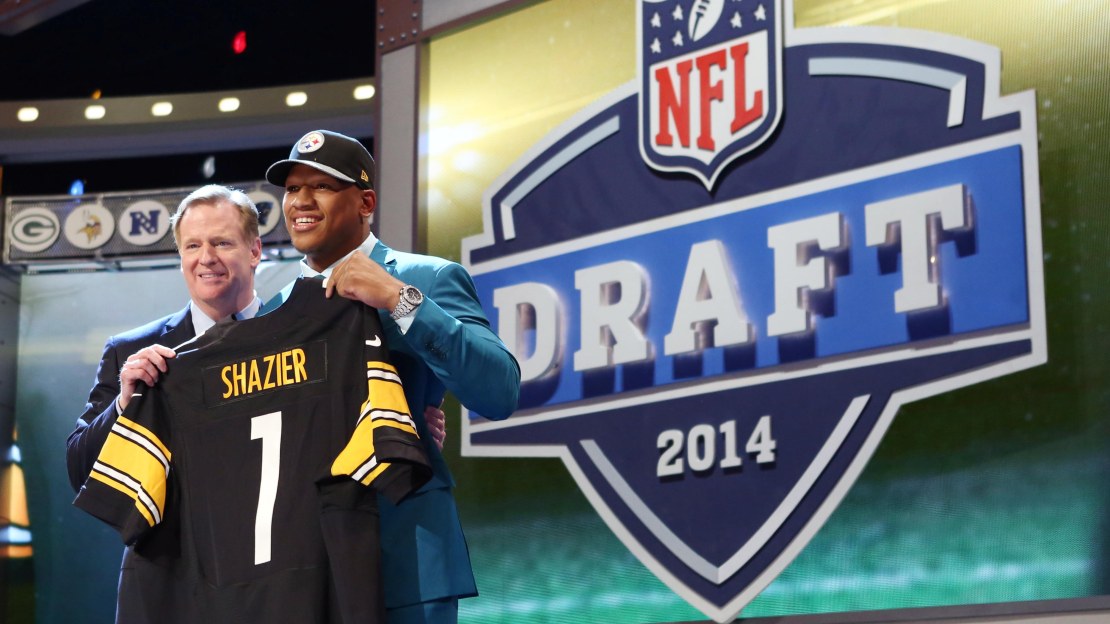 Last year, the Big Ten had one first-round pick. Things went better last night in what was a good first night at the NFL draft for the Big Ten with four selections. Ohio State led the way with two picks. The first Big Ten player off the board? Michigan offensive tackle Taylor Lewan. He also was the third OT tabbed, going No. 11 to Tennessee.

Lewan is the first Wolverine to be picked in the first round since defensive lineman Brandon Graham went No. 13 to the Philadelphia Eagles in 2010. He also becomes Michigan's highest draft choice since offensive tackle Jake Long went No. 1 overall in 2008.

The next Big Ten player taken was Ohio State linebacker Ryan Shazier, who went to the Steelers with the No. 15 pick after he declared early for the draft.

Michigan State cornerback Darqueze Dennard was the third Big Ten player tabbed. But he slid further than expected, going No. 24 to the Bengals after some had him going as high as No. 10.

Some people thought Nebraska cornerback Stanley Jean-Baptiste would be a first-rounder, as he seemingly was making a late push up draft boards. Alas, he?ll have to wait.

Expect him to go today.

How well is recruiting going for Penn State coach James Franklin? He?s turning away kids already-and we are in May.

One recruiting service has Penn State?s current haul of 15 recruits No. 2 in the nation. One way to augment recruiting numbers is to grayshirt, which is a practice that Franklin and the Nittany Lions could utilize.

Nice piece here on the father-son relationship between Doug and Chris Collins.

From football coach to president of Youngstown State ? what a rise for Jim Tressel. My reaction: wow. Has a former football coach-who got a program on NCAA probation, no less–ever been named a school president?

Ronnie Johnson will play for Kelvin Sampson at Houston. No love for Purdue there,

My take: This is perfect.

Big Ten put four in first round after just one a year ago. SEC led way with 11, followed by ACC with five.

Stuff like this can only help in recruiting. #Buckeyes can sell they had two first-round picks. Two second-rounders coming tomorrow.

My take: No doubt. As if OSU needs more help in recruiting.

My take: There is that.

Darqueze Dennard will be in the same defensive backfield as Leon Hall. How about that?

My take: Michigan vs. Michigan State.

Mark Dantonio just said that he Darqueze Dennard will be an All-Pro corner. "write it down"

My take: Maybe next year?