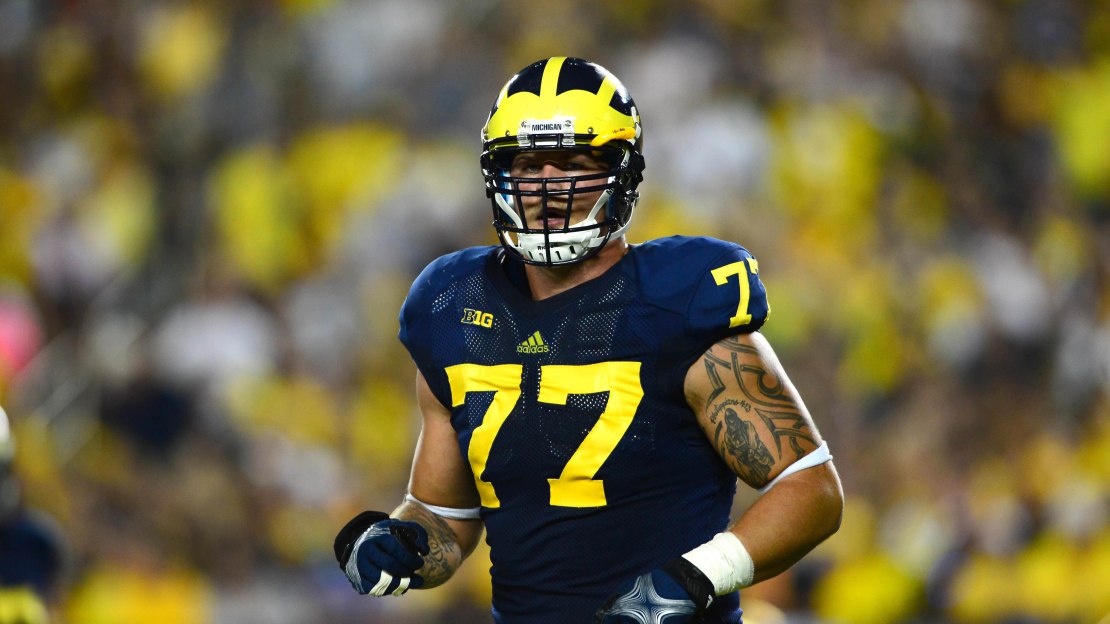 Big Ten football fans have plenty to be excited about at the NFL draft. By almost every expert's estimation, there should be at least five Big Ten prospects selected in the opening round of the draft, which kicks off at 8 p.m. Thursday night at Radio City Music Hall in New York City.

We have all heard about some of the top Big Ten prospects in this year's draft, but let's go ahead and get deeper into the rankings.

Here is my big board of the top 50 Big Ten players in this year's NFL Draft.

1. Taylor Lewan, OT, Michigan: This draft is loaded with offensive tackles, but Lewan has the skill-set to play left and right tackle, which will only help his stock. I'd be shocked if this guy falls out of the top 10.

2. Darqueze Dennard, CB, Michigan State: The top cover-corner in this year's draft class, Dennard has outstanding natural instincts and is able to diagnose plays very quickly, which is something that rookie corners often struggle with.

3. Ryan Shazier, OLB, Ohio State: Totaled an eye-popping 316 tackles in three years in Columbus and has a knack for making big-time plays in big-time games.

4. Ra'Shede Hageman, DT, Minnesota: When this guy is playing with a high-motor, there may not be a more intimidating force in this year's NFL Draft class.

5. Carlos Hyde, RB, Ohio State: Considered by many to be the top back in this year's draft, Hyde runs with outstanding power and plays with a pure passion for the game.

6. Bradley Roby, CB, Ohio State: One of the top athletes in this class, Roby has an extremely high ceiling and has the chance to be an elite NFL corner if he lands with the right team.

7. Cody Latimer, WR, Indiana: A bit of an unknown commodity playing at a basketball school, this guy has great size and can stretch the field with his play-making ability.

8. Allen Robinson, WR, Penn State: People knock Robinson for his lack of explosiveness, but there isn't another guy in this draft capable of going up and making tough catches over defenders like he can.

9. Chris Borland, ILB, Wisconsin: He lacks ideal size and measurables, but this guy is a flat-out football player and an ideal teammate.

11. Jared Abbrederis, WR, Wisconsin: You won't find a better route runner or a pair of better hands in this year's draft. Totaling 78 catches for 1,081 yards and 7 touchdowns last season speaks to that.

12. Jack Mewhort, OT, Ohio State: All this guy did in college is keep the Big Ten's top quarterback on his feet and pave the way for one of the top rushing attacks in college football.

13. DaQuan Jones, DT, Penn State: A big-body guy who has the size and speed combination to play defensive tackle in a 4-3 or nose tackle in a 3-4 defense.

14. Brock Vereen, S, Minnesota: Prototypical free-range safety with strength and cover skills. Could be a starter one day if he improves his run defense.

15. C.J. Fiedorowicz, TE, Iowa: At 6-5, 265 pounds, this guy has ideal size for an NFL tight end and should stand out in a relatively weak tight end draft class.

16. Max Bullough, ILB, Michigan State: Bullough is a big, tough football-minded star who was the heart and soul of the top defense in college football this past season.

17. Christian Kirksey, OLB, Iowa: An elite athlete who has a knack for making plays in space, Kirksey has the highest ceiling of Iowa's terrific trio of linebackers in this year's draft.

18. Michael Schofield, OT, Michigan: This guy is a good run blocker who can move around on the line, which should help his stock in the draft.

19. Ricardo Allen, CB, Purdue: Allen doesn't have great size, but he is a flat-out playmaker, returning four of his 13 career interceptions for scores.

20. Dez Southward, S, Wisconsin: This guy didn't start playing football until his senior year in high school, but he is an elite athlete who has good size and speed.

21. Denicos Allen, OLB, Michigan State: Allen had one of the most productive four-year college careers of any linebacker in this draft. He lacks ideal size for the position, but he makes up for that with experience.

22. Isaiah Lewis, S, Michigan State: Like Allen, Lewis lacks ideal size but is physical and has an outstanding motor, anchoring the top defense in the nation.

23. Spencer Long, G, Nebraska: Long has just about everything teams want in an NFL prospect. He's big, strong, tough and plays with an edge.

24. John Urschel, G, Penn State: Smartest player not only on this list, but in the entire NFL Draft. This guy will be successful in whatever he does.

25. Jonathan Brown, OLB, Illinois: Brown is a solid athlete with a great work ethic, but at 6-0, 238 pounds, he's undersized for an NFL linebacker.

27. Anthony Hitchens, OLB, Iowa: Isn't a big linebacker at 6-0, 240 pounds, but he moves well and is an aggressive tackler. Hitchens does not back down from anyone.

28. Quincy Enunwa, WR, Nebraska: Lost a bit in a deep wide receiver class, Enunwa has exceptional size (6-2, 225 pounds) and can go up and snatch the ball out of the air.

29. Andrew Norwell, OG, Ohio State: An old-school offensive lineman who can mix it up in the trenches. His versatility should help him find a home in the NFL.

30. James White, RB, Wisconsin: White has elite explosiveness and surprising power; it's just a matter of how many touches a team can give him given his size at 5-9, 204 pounds.

32. Corey Linsley, C, Ohio State: Has ideal strength for the center position, which he used to anchor one of the top rushing attacks in the Big Ten.

33. Jacob Pedersen, TE, Wisconsin: He's good in the short passing game and is very versatile, which means he can be moved around and used in a number of formations.

34. Bennie Fowler, WR, Michigan State: He is an outstanding athlete with a great combination of size and leaping ability – just needs to be more consistent.

35. James Morris, LB, Iowa: He's not the kind of guy who will blow you away with his athleticism and measurables, but he is a really good football player who has the determination to succeed as a 4-3 Mike linebacker.

36. Kain Colter, ATH, Northwestern: Played quarterback in college, but will have to use his athleticism, playmaking ability and creativity to adapt as a slot receiver in the NFL.

37. Bruce Gaston, DT, Purdue: Gaston has great size (6-3, 316 pounds) and experience as a four-year starter at Purdue. Once he develops into a better pass rusher, he could be a starter in a 4-3 system.

39. Glenn Carson, ILB, Penn State: Smart kid who has the experience and work effort to carve out a solid career in the NFL.

40. Taylor Martinez, ATH, Nebraska: An elite athlete, Martinez will likely find a spot in the league as a wide receiver or defensive back.

41. Christian Bryant, S, Ohio State: He is coming off a season-ending ankle injury, but if Bryant can make a full-recovery, he is going to be a late-round steal.

42. Ciante Evans, CB, Nebraska: He isn't the biggest corner at 5-10, 193 pounds, but he looks for contact, recording 11 tackles for loss this past season, which led all Big Ten cornerbacks.

43. Kenny Guiton, QB, Ohio State: He played behind Braxton Miller, but shined whenever he took the field. Guiton has the skills to make an NFL roster, despite being a backup throughout his college career. He's that good.

44. Ted Bolser, TE, Indiana: He isn't a an elite-level athlete, but has above-average size and strength, which should help him land on a roster as a run blocker and a short-area pass catcher.

45. Fou Fonoti, OT, Michigan State: Explosive college tackle whose development was slowed by a foot injury. He has the size to make it if he can develop his pass protection skills.

46. Connor Boffelli, OG, Iowa: This is a football-minded guy who possesses both the intelligence and versatility to battle for an NFL roster spot.

47. C.J. Barnett, S, Ohio State: He has an advanced understanding of the game, and is physical in run support. This guy has the drive to be successful at the next level.

48. Corey Brown, WR, Ohio State: He's not the biggest player in the world, but he does a little bit of everything out on the football field.

49. Tyler Hoover, DT, Michigan State: This is a big, physical guy who plays with a chip on his shoulder, but injuries have plagued him throughout his college career.

50. Cody Webster, P, Purdue: One of the finalists for the Ray Guy Award in 2013, Webster has a huge leg and could very well be selected late in this draft.