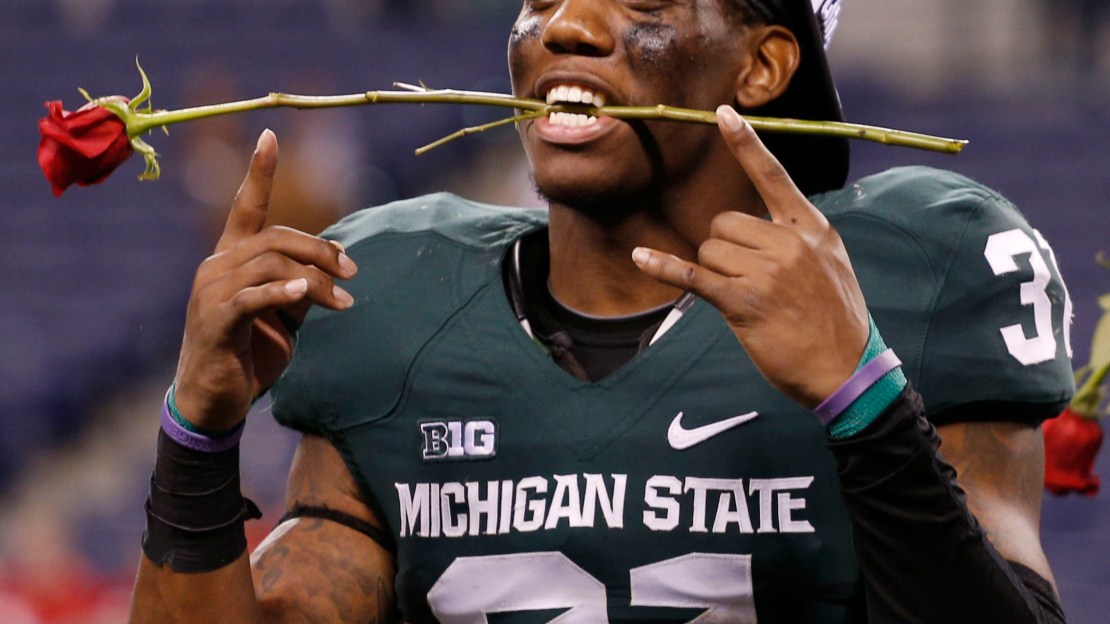 It?s NFL draft eve, people! It?s almost here ? finally! Stock up on the Ro-Tel and chips. So, I would be remiss if I didn?t include at least ONE mock draft in today?s links, right? Right. This is a good one from CBSSports.com that combines draft experts.

The first Big Ten player off the board? Michigan OT Taylor Lewan. I thought Michigan State CB Darqueze Dennard might get that honor. Stay tuned.

One guy who is creating a draft buzz as the opening bell approaches is Nebraska corner Stanley Jean-Baptiste. It seems the projections for him are all over the board.

A corner of his size and skill set figures to go high, I think. I would be surprised if Jean-Baptiste makes it to the weekend portion of the draft. In fact, he could be a first-round selection.

Oh, and there?s this on Kain Colter, the union organizer and NFL hopeful. Where may he go in the draft?

A second-rounder? A third-rounder? Perhaps. The guy is ultra-athletic and versatile. Some team will find a role for him. I know I would.

While on the topic of drafts, how about some NBA draft talk? Sure. The mock drafts have been circulating and updating. Two have Michigan State star Gary Harris staying in-state and getting selected by Detroit with the No. 8 pick.

"Harris is a well-rounded player who can do numerous things to help his team win on both ends of the court," NBADraft.net wrote. "His game is very advanced for a 19-year-old and if he raises his game to be one of the top players in college basketball next season, he could be right up at the top of this promising draft class."

Iowa?s Roy Devyn Marble isn?t as highly touted as Gary Harris, but he?s already off in California working on honing his game.

?A lot of teams like him as a point guard,? Iowa coach Fran McCaffery said. ?They love the fact that they would have a 6-7 point guard who can score, and he?s an underrated defender. The other thing is that he?s a young senior. They tend to draft young guys.?

This James Franklin knows how to work a crowd. Check out this video of Franklin taking a phone call from a recruit during an event, as he proceeds to lead the crowd in a ?We Are!? chant.

Any wonder why the Nittany Lions are off to such a strong start in recruiting?

As you would suspect, there are a lot of takes and opinions on the big news of the Big Ten moving its hoops tourney to Washington, D.C., in 2017.

This quote by Nebraska coach Tim Miles sums up the best logic for the decision.

?There?s more people, more media, more everything back there,? he said. ?With the Big Ten moving in that direction, it?s important to go that way and showcase our teams.?

?It?s clearly not a slam dunk,? said Andrew Zimbalist, an economics professor at Smith College who has authored 22 books and considered an authority on sports economics. ?The Big Ten is a traditionally Midwest market. They have expanded that out to Nebraska and the other way toward Penn State successfully. The challenge is, No. 1, the Big Ten hasn?t been in the East. No. 2, the markets that they?re hitting are mainly the greater New York market and the D.C. market and both markets amply served by professional sports. Certainly it?s going to be more difficult.?

The Big Ten had to make this move east. It couldn?t stand pat. The debate on if it will be successful will rage for some time. If it works out, it may be the biggest feather in Jim Delany?s cap.

One more take on the Big Ten going to D.C. from Graham Couch, who hails it as absurd and intelligent.

No hoop team has suffered more key attrition than Michigan.

This is stupefying, really: The Wolverines have bid adieu to three players to NBA early entry (Nik Stauskas, Glenn Robinson III and Mitch McGary) plus another (Jon Horford) who is transferring to Florida.

?Every year you get this false impression that things will slow down and actually we worked from early in the morning until 8 or 9 every night, trying to make decisions and try to help the three that went pro with their decisions and look at our options,? Beilein said. ?It was very busy.?

The frontcourt is a big area to watch. Guys like Ricky Doyle, Mark Donnal and Max Bielfeldt need to step up.

When Tom Osborne helped Nebraska get into the Big Ten, I have to think he didn't imagine conference hoops tournaments in Washington DC.

James Franklin getting off to a hot recruiting start at Penn State. Brady Hoke did, too. Win games …

My take: Well, Franklin?s track record says he will win.

Big Ten Tournament in DC is all about engaging the DC television market, nothing more. Butts in seats doesn't matter, eyeballs do.

My take: An interesting take.

Landing the @Rivals No. 1 player in Pennsylvania isn't enough to top Bama in team rankings. Color me impressed anyway.

My take: Regardless, Penn State is on fire when it comes to recruiting. The Big Ten better be afraid. Very afraid.

Congrats to an ex-Gopher LB ?@Mike_Rallis: Excited to say I'm heading to @WWEPerformCtr now for my first full day of work! #DreamComeTrue?

My take: Maybe we?ll see him on Monday Night Raw.

Delany on B1G fans upset with move: "Change is difficult for people." #Badgers