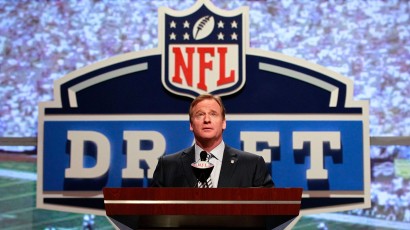 With the 2014 NFL Draft set to begin on Thursday, let's look back at how some of the players we have featured this year continue to represent their alma maters well on – and off – the football field.

Tom Brady (Michigan) continues to be active with Best Buddies in Hyannis Port. Their annual Best Buddies Challenge is coming up at the end of this month!

Since we featured Matt Light (Purdue), his foundation added a new event – Fool's Night Out.

Astronaut Mike Hopkins (Illinois) will be the commencement speaker in Champaign-Urbana in May. He was featured in this season's LiveBIG: Illinois television show.

Former NFL kicker Morten Andersen (Michigan State) continues to be involved with Special Teams for Special Ops, a group that aids the families of fallen and injured soldiers.

Brian Griese (Michigan) continues to help families and children in the Denver area through Judi's House.

Finally, one player hoping to hear his name called this week is Northwestern's Jeff Budzien, who was active in the community during his time as the Wildcats' kicker.