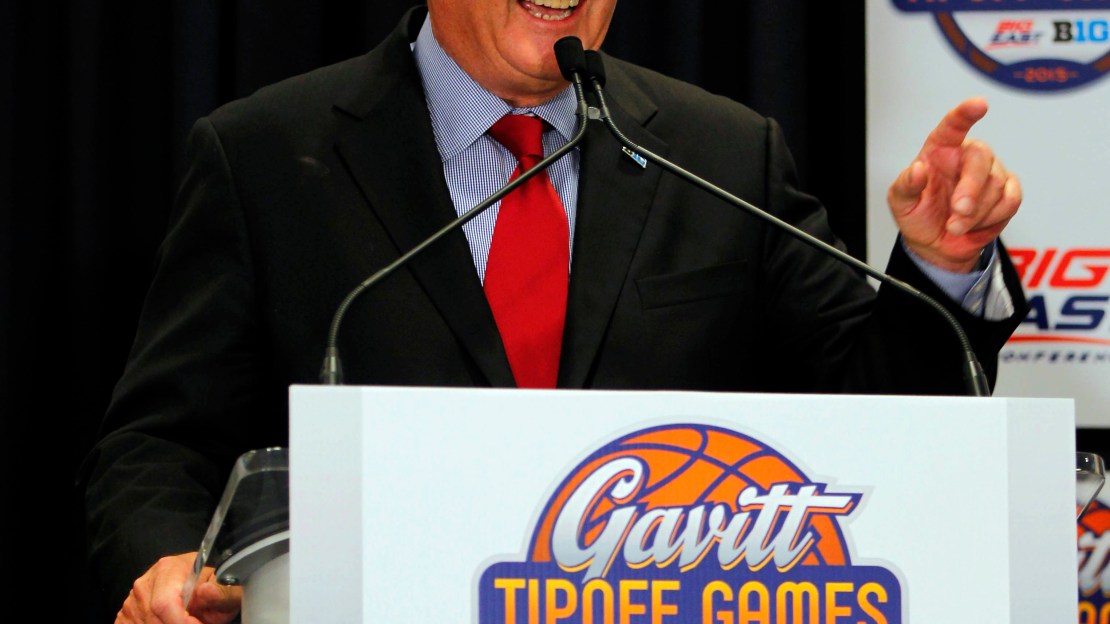 NEW YORK — Jim Delany?s sense of excitement was apparent in his voice when he spoke during breakfast this morning of the coming Big Ten-Big East basketball event that was just hours away from being announced but had been months in planning.

Slathering jelly on his wheat toast inside the tony New York Athletic Club on the southern edge of Central Park, Delany spoke about the need to establish a Big Ten presence in New York. And, there was no better partner to help begin that process than the Big East.

?I have known (Big East commissioner) Val Ackerman for a long time,? said Delany. ?We have worked together in the past and we talked about what we could do together as leagues. That led to this.?

The Gavitt Tipoff Games officially were announced today in the Delta Sky 360 Club inside Madison Square Garden, one of the world?s most famous basketball palaces nestled amid the bustle of the world?s biggest media market.

The Gavitt Tipoff Games, no doubt, will help the Big Ten establish its footprint along the Eastern Seaboard, as the league?s tentacles soon will stretch from Lincoln, Neb., to Piscataway, N.J., and College Park, Md., with the official arrivals of Rutgers and Maryland on July 1. That will bring league membership to 14. It?s important to Delany for this new, vast Big Ten to stay connected.

?You can beam a TV signal into the East, but you need to be here, too,? said Delany. ?You need boots on the ground.?

Consider this a heavy step that will leave a mark for the Big Ten-or at least that?s the hope.

Conversely, the Big East needs this event to better establish its brand in the Big Ten?s traditional Midwestern turf after adding the likes of Xavier, Butler and Creighton last season. These will be some high-profile games vs. top teams that will help the Big East gain credibility and enhance its schedule strength across the board as its competes for NCAA bids in the future.

The series-named for the late Dave Gavitt, the founder of the Big East and its former commissioner–will take place the first full week of the regular season in November, as it?s hoped the grandness of the event will cut through the clutter of a crowded sports calendar and help trumpet the start of the season.

?We will begin the season with a bang,? said Ackerman. ?Both leagues have a shared geography and competition will help with RPIs.?

Here?s how the event will be structured: Two games will be played on the first Tuesday, Wednesday, Thursday and Friday of the regular season, with those games taking place at school?s home sites with four at a Big East school and four at a Big Ten school.

Each Big East team will play a minimum of six times during the length of the eight-year deal, and each Big Ten program will participate at least four times. It will be an annual series of eight games that will run through 2022.

?This is a chance to expand our base, stay connected with our already existing fans and offer games we think everyone will like,? said Delany. ?We have to enhance and increase our presence in this area.?

Matchups will be announced in the spring each year of the series. FOX Sports1 will broadcast the Big East home games, while BTN and ESPN will televise the Big Ten home games.

Some schools from these leagues also have played of late, like Creighton-Nebraska, Marquette-Wisconsin, Butler-Indiana and DePaul-Northwestern, among others. The Gavitt Series won?t impact any of those in the future; it only will enhance what?s already on the schedule for teams.

Ackerman and Delany will be the ones who schedule the games in this series. And, some of the possible matches we could see down the road are intriguing.

?There are a lot of positives,? said Iowa coach Fran McCaffery. "I think this will help both of the leagues."