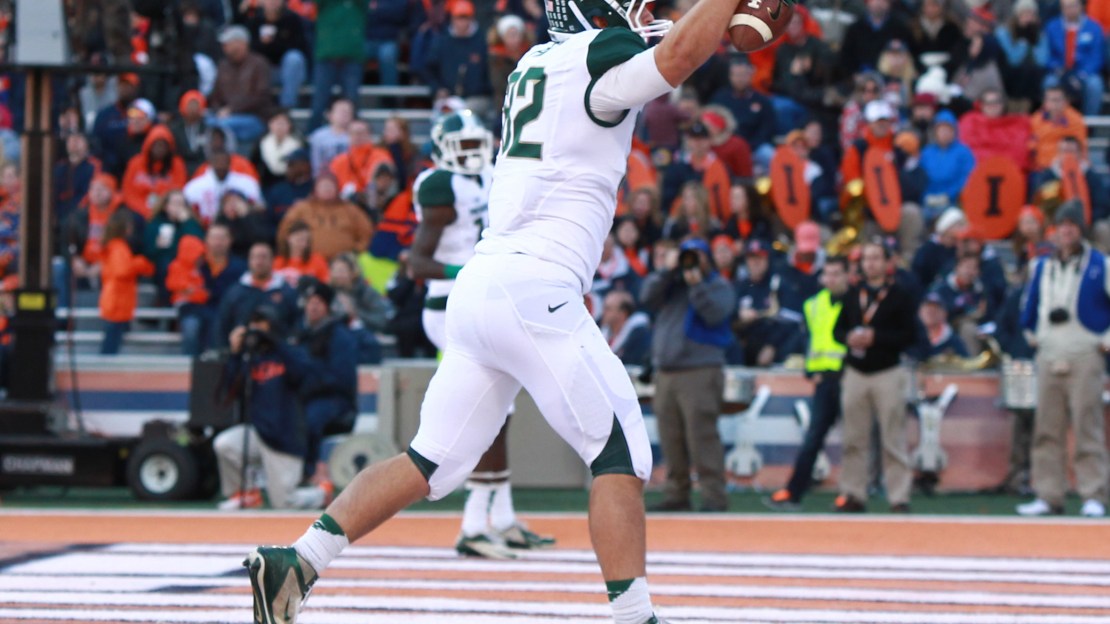 The Big Ten spring football season is officially in the books, which means it's time to point out those who stood out and made an impact for their respective teams. I reached out to writers from every Big Ten school and asked them who they were most impressed with in their team's spring football game and why.

Illinois: Matt Daniels (@mdaniels_NG), News Gazette – WR Justin Hardee
Based strictly on the spring game, which the Blue easily won 38-7 with Reilly O'Toole and Wes Lunt receiving roughly the same snaps at quarterback, wide receiver Justin Hardee had a stellar afternoon. Much is expected of Hardee this season. The junior has the most experience of any Illinois wideout. From what offensive coordinator Bill Cubit showcased last year, wide receivers play a prominent role in the Illini offense. Tim Beckman brought Hardee in two years ago with the thought of using him at defensive back, but the lack of depth at the position prompted a move to wide receiver. Hardee has displayed flashes of his talent at times in his first two seasons at Illinois. He'll have to do so on a more consistent basis this fall. He tallied five catches for 81 yards in the spring game and made two impressive catches. One was for a 23-yard touchdown and came on a sliding effort after O'Toole's intended pass to Devin Church sailed high. Hardee also made a nice adjustment on a deep pass from Lunt down the sidelines, hauling it for a 42-yard gain on a ball that was a tad underthrown. Hardee still has items to improve upon, route running and creating separation from defenders, but if he keeps producing like he did during the spring game, watch out.

Indiana: David Woods (@DavidWoods007), Indianapolis Star – RB Tevin Coleman
We didn?t see much of Coleman because Hoosier coaches didn?t want to subject him to needless pounding. He rushed just three times - for 61 yards, including 31 on his first carry. But it was a reminder that Indiana?s offense can do more than pass. Coleman had eight runs last year of 40 or more yards, tying for the national lead.

Iowa: Scott Dochterman (@ScottDochterman), Cedar Rapids Gazette – WR Derrick Willies
Freshman wide receiver Derrick Willies has shown Iowa fans this spring both what the team has lacked in recent years and what they can look forward to in the future. Willies stands 6-4, weighs 210 pounds, has soft hands and displays breakaway speed. In two open scrimmages, Willies has caught 12 passes for 290 yards. He's scored touchdowns by breaking tackles and running away from pursuers. He runs good routes and doesn't shy from contact. He has the potential to help elevate Iowa's passing game into a real threat this fall.

[ MORE: Relive all of our spring football coverage ]

Maryland: Jeff Barker (@sunjeffbarker), Baltimore Sun – CB Will Likely
Will Likely always seems on the verge of doing something you wouldn?t want to miss. It was that way during his freshman season of 2013, and again in Maryland?s spring game. Likely had two interceptions and was credited with four tackles in the contest. The defense produced as many memorable plays as the offense. Likely?s confidence is palpable. He just never seems afraid. His upbringing may have contributed. He grew up near Lake Okeechobee, in Florida?s Everglades country - an area nicknamed "The Muck" that has produced many Division I stars.

Michigan: Nick Baumgardner (@nickbaumgardner), MLive.com – CB Jourdan Lewis
Freddy Canteen is probably the popular answer here, as just about everyone in the program raved about his speed, confidence, ability. But Lewis was extremely aggressive in the spring game. He picked off two passes, and was in position to make a play almost every time the ball came his way. Michigan's corners really struggled to play tight with receivers last season, Lewis seemed to show signs of serious growth this spring.

Michigan State: Graham Couch (@Graham_Couch), Lansing State Journal – TE Josiah Price
For Michigan State's pro-style offense to really hum, it needs a stretch-the-field, reliable tight end. Price showed he is ready to be that. He looked in sync with quarterback Connor Cook all day. Price caught five passes for 81 yards, including the game-winning touchdown. But his first grab said it all — a 28-yard snare on a high throw in traffic. If MSU's offense is more than it was late last season, it'll be in large part due to Price.

Minnesota: Joe Christensen (@JoeCStrib), Star Tribune – RB Berkley Edwards
He seemed to deliver at least one big play every practice all spring, using his quickness and breakaway speed. In the spring game, he scored the lone touchdown of the day, taking a handoff, bursting around the left edge and sprinting 33 yards for a score. He?s 5-9, 190 pounds, but he?s not afraid to run between the tackles. He should add a new dimension to Minnesota?s offense this season.

Nebraska: Brian Christopherson (@HuskerExtraBC), Lincoln Journal Star – DT Maliek Collins
Perhaps nobody drew more praise in Husker camp this spring than Collins, who possesses freak athleticism for a man who stands 6-feet-2, 300 pounds. Bo Pelini said there are attributes in Collins' game that remind him of another great D-tackle he coached, former LSU star Glenn Dorsey. Pelini isn't quick to name-drop former players as they compare to his current players. So that comment carries some weight. Then there was senior running back Ameer Abdullah saying he expects Collins to be an All-American before his career ends. While there is still much to prove for a player who only arrived on campus last summer and has just one start to his name, it's understood why everyone is so high on Collins after watching him work this spring. Among other things, he's versatile enough that coaches are not afraid to line him as a rush end. What's more, he doesn't look out of place when he takes reps there. Collins has a really quick first step off the snap and seems to be gaining in understanding of how to use his hands to win battles at this level. Just as noticeable, and just as important, he seems fully invested in learning what still needs learned.

Northwestern: Teddy Greenstein (@TeddyGreenstein), Chicago Tribune – WR Kyle Prater
Prater came to Northwestern with great fanfare - a 6-foot-5, 5-star recruit from Chicago who spent two injury-plagued seasons at USC before transferring. But in two seasons, his impact has been minimal - 19 grabs for 113 yards. Nagging injuries to his legs held him back. Now a fifth-year senior, Prater says he has bulked up to 234 pounds: ?This is the best I?ve felt throughout my college career. Nothing?s wrong. I feel great things coming.? At an open practice April 5, Prater drew ?ooohs? from onlookers for a one-handed grab on a ball from backup Zack Oliver. Prater still will have to battle the likes of Tony Jones, Christian Jones and Cameron Dickerson for playing time, but his outlook is much more promising than at this time last season.

Ohio State: Kyle Rowland (@KyleRowland), Elevenwarriors.com – Coach Chris Ash
Chris Ash came to Columbus with a giant responsibility: fixing a fractured secondary that was at the root of the Buckeyes' defensive woes last season. In 15 practices, a new scheme and new attitude is already forming, and it was evident in the spring game. Yes, it was only a scrimmage and several key members of the offense were out, including Braxton Miller, but the performance of Ohio State's cornerbacks and safeties is something to take notice of entering the fall. There were zero touchdown passes and no completions longer than 35 yards. Cornerbacks Armani Reeves, Gareon Conley and Eli Apple displayed an aggressive style that differs drastically from the past two seasons of five-yard cushions. The corners were on the line of scrimmage with in-your-face press coverage, sending a message to Big Ten opponents. Safeties Tyvis Powell and Cam Burrows patrolled the middle of the field and limited big plays for an offense that thrived on them last season. When real games begin, the unit will be bolstered by the presence of Doran Grant and Vonn Bell. A national championship wasn't won in the spring, but Ash is already making fans a believer in his methods.

Purdue: Mike Carmin (@carminjc), Lafayette Journal and Courier – RB Raheem Mostert
Since his freshman year, we haven't heard much from Mostert. That was on special teams when he led the nation in kickoff returns. Mostert has the No. 1 running back spot going into training camp and is expected to give the Boilermakers a mix of power and speed to boost the running game. He also came into spring practice with a high level of confidence after winning the 60- and 200-meter Big Ten titles during the indoor track season.

Rutgers: Dan Duggan (@DDuggan21), NJ.com – DE Kemoko Turay
The most impressive player in Rutgers' spring game was defensive end Kemoko Turay. The 6-foot-6, 220-pound redshirt freshman recorded three sacks while squaring off against the first-team offensive line. Turay has great burst off the edge and he flashed the athleticism that landed him a scholarship despite playing only one year of varsity football. He?s still developing, but Turay should be able contribute as a pass-rusher next season.

Wisconsin: Tom Mulhern (@TomMulhernWSJ), Wisconsin State Journal – C Michael Deiter
Michael Deiter was 17 years old when he arrived in Madison in January as an early enrollee. He he had never played center. But with two centers — sophomore Dan Voltz and senior Dallas Lewallen — forced to sit out out all spring following surgeries — Deiter stepped in as the No.1 center for the entire spring. Not only did Deiter help the offense through a tough spot at center, he also took reps at guard. Deiter is expected to be a second-team guard when the injured players return for fall camp. His rapid development has bolstered a line that returns four starters but lacks depth.