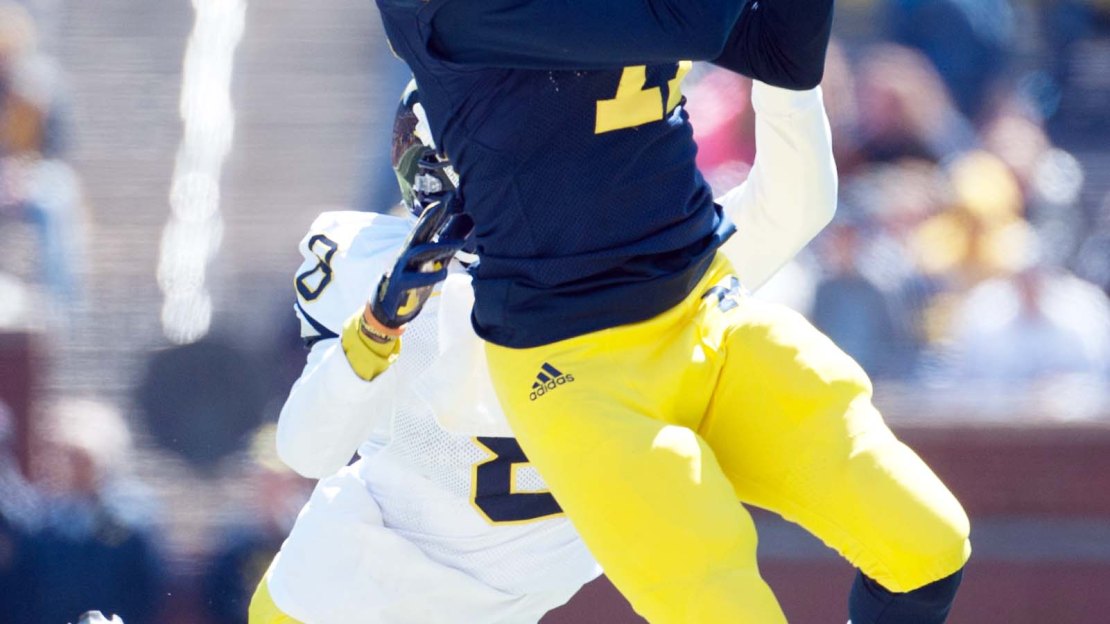 With Big Ten spring practices finished, it?s time for my annual tradition of naming an All-Spring Team. These are players who made moves in the spring as surprise players-or vets who took another step in their development.

[ MORE: Get all of our Big Ten spring football coverage ]

QB Trevor Siemian, Northwestern. He enjoyed a strong spring, firming up his status as the No. 1 man with Kain Colter gone. Yes, Siemian lacks the mobility of previous NU signal-callers. But he has a superior arm. Expect the pass to be bigger part of the Wildcats attack in the fall because of it.

RB Josh Ferguson, Illinois. The diminutive but powerful Ferguson was the offensive MVP in the spring. Ferguson is tough enough to run between the tackles but also is shifty in space and a terrific pass catcher.

RB Curtis Samuel, Ohio State. Samuel enrolled early and quickly caught the attention of Urban Meyer, who is ?really excited? about Samuel. He brings a speed element that?s intriguing, but does he have the size and strength to take a pounding?

TE Josiah Price, Michigan State. He capped a strong spring by nabbing five catches for 81 yards and the winning reception in the spring game. Tight end was a largely forgotten position last season in East Lansing. That won?t be the case this fall.

WR Derek Willies, Iowa. He looks primed to be a playmaker for an offense that needs some juice at wideout. His touchdown catch in the spring game was nice, as the redshirt freshman made five grabs for 132 yards for a Hawkeye wideout corps that actually could be a strength.

WR Freddy Canteen, Michigan. The early enrollee with the catchy name created a buzz all spring, showing sticky hands, toughness and route-running ability. Plus, Canteen can play the slot or on the outside.

OL (T) Rob Havenstein, Wisconsin. The Badgers had a lot of injuries along their front in the spring. But the massive Havenstein was the one constant, emerging as a leader. The senior is the next in line among great Wisconsin blockers.

OL (C ) Sal Conaboy, Maryland. The most experienced member of what should be a good Terps? offensive line, Conaboy led a unit that improved greatly during spring practice and also was named to Randy Edsall's leadership council.

OL (G) Jake Cotton, Nebraska. He stepped up as the unquestioned leader (on and off the field) of new-look offensive line that will hold a big key to the success of the 2014 Husker offense.

OL (T) J.J. Prince, Purdue. The Boilermakers are desperate for improved line play. And Prince was a huge surprise all spring, making a strong statement to win the right tackle spot.

OL (T) Taylor Decker, Ohio State. This time last year, he was the lone question on a strong line. Now, he is the lynchpin of a young group that has a lot to prove. Decker continued to develop in the spring to the point where the staff sat him out of the spring game. He will be one of the Big Ten?s best in 2014.

DL (T) Maliek Collins, Nebraska. He made a big step up this spring and appears ready to team with Vincent Valentine to form a formidable interior duo for a Cornhusker defensive line that should rank among the Big Ten?s best.

DL (NG) Warren Herring, Wisconsin. The Badger defense has been torn asunder, basically losing its front seven. Herring's development as one of the few veterans up front was important.

DL (T) Darius Hamilton, Rutgers. He was almost unblockable most of the spring, building on what was a strong finish to his 2013 campaign.

DL (E ) Ryan Russell, Purdue. The senior was a beast in the spring, showing a relentlessness that will need to translate to the fall. No doubt, Russell has the tools to excel. He needs to bring it each snap.

LB Earnest Thomas, Illinois. The staff wants more speed on defense, so Thomas was shifted from safety to the ?star? position, which is a hybrid linebacker/safety. Thomas is the Illini?s top returner tackler and picked up where he left off in the spring by earning team defensive MVP honors.

LB Darron Lee, Ohio State. The Buckeyes need some help at linebacker, and Lee was a monster in the spring. He?s ready to play a big role, as time and again he flashed speed, instincts and strength. Watch him and Chris Worley battle for a spot.

LB Quinton Alston, Iowa. The Hawkeye linebackers have a lot on their plate replacing stalwarts in Christian Kirksey, James Morris and Anthony Hitchens. Alston showed this spring that he could be the centerpiece of the new corps with his combination of leadership and skill.

CB Jourdan Lewis, Michigan. He continued to impress all spring. At times, he was the best corners on the roster, out playing Raymon Taylor and Blake Countess. Lewis capped things by notching two interceptions in the spring game.

CB William Likely, Maryland. After starting the majority of his true freshman season, Likely was the most consistent corner during the spring, notching an interception in the spring game.

S Damarius Travis, Minnesota. He was a beast all spring. In fact, defensive coordinator Tracy Claeys said after the spring game that if he had to play the next week, Travis would start (over returning starters Cedric Thompson or Antonio Johnson). Travis, who also can play linebacker, was Minnesota?s most improved DB.

S Jalyn Powell, Michigan State. The redshirt freshman is pushing for time over vets like RJ Williamson and Demetrious Cox. Powell capped a strong spring with five tackles in the Green and White game.