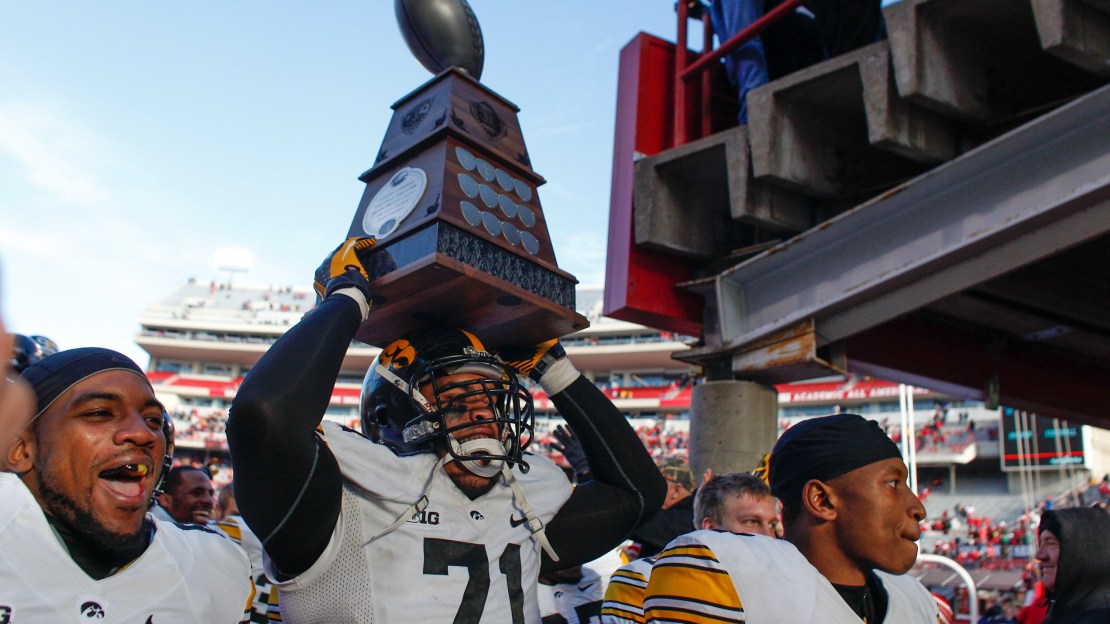 Iowa is coming off a nice rebound season in 2013, forging an 8-5 mark (5-3 Big Ten) a year after going 4-8 (2-6). Now, expectations are high in Iowa City for a Hawkeyes program that brings back lots of talent and could win the inaugural Big Ten West as Kirk Ferentz begins his 16th season.

The biggest reason for optimism? An offense that teems with as much skill-position talent as it has had in years.

Here are some observations about spring ball in Iowa City.

[ MORE: Read all of our Big Ten spring football coverage ]

1. Iowa may have found a big-play wideout in Derrick Willies. Kevonte Martin-Manley and Tevaun Smith are the top options. We know that. But Willies looks primed to be a playmaker for an offense that needs some juice. His TD grab in the spring game was nice, as the redshirt freshman made five catches for 132 yards. And keep an eye on Jacob Hillyer, a blue-collar type who will have a role. Two more names to bank at wideout: Matt VandeBerg and Andrew Stone.

2. Yes, Iowa lost a lot at linebacker with the graduations of Christian Kirksey, James Morris and Anthony Hitchens. The staff has done a nice job developing this group, which has talent and just needs some experience. Travis Perry (missed spring game), Reggie Spearman and Quinton Alston look like a promising trio. Depth also is good. Alston looks like the bellwether, a leader who can make plays.

3. The d-line should be one of the best in the Big Ten. The tackle tandem of Carl Davis and Louis Trinca-Pasat will be formidable. Depth is good on the interior, as Jaleel Johnson and Faith Ekakitie are big bodies who show they can hold up at the point of attack. Ends Drew Ott and high-energy Nate Meier bring some heat off the edge along with Mike Hardy and Riley McMinn.

4. Remember when it seemed like there was a running backs curse at Iowa? Seems funny now when look at a roster stacked with the likes of Mark Weisman, Damon Bullock, Jordan Canzeri, LeShun Daniels and Barkley Hill. It will be interesting to see if the staff finds ways to get these guys on the field in tandem to take advantage of the talent glut.

5. Yes, C.J. Fiedorowicz is gone. But the Hawkeyes still have some nice options at a tight end spot that figures to be a strength once again. Jake Duzey can get up the field and make plays after the catch. George Kittle and Ray Hamilton also showed they can move the chains and be physical. Ditto Henry Kreiger-Coble.

The quote: "After watching this spring, I think it is something that is very realistic because they both do some things well. Jake (Rudock) has really elevated his performance, and I think he is a better player now than he was in January. It's a good thing, and when you have two players that you have a lot of confidence in, it makes sense to play them in the game. The tricky part is that with quarterbacks it's a little bit different. I think it's realistic and certainly something we're going to talk about once we get back together in June." - Kirk Ferentz, on the possibility that backup QB C.J. Beathard may have a shot to get involved in the mix with Rudock.

Offseason to-do list
1. Shore up the kicking game. It wasn?t ideal that no one emerged in the spring to win the kicking and punting jobs. The buzzword: uneven. Connor Kornbrath and Dillon Kidd are battling at punter. The kicking job is between Alden Haffar and Marshall Koehn.

2. Continue to work on the passing game. The staff made it a point of emphasis in the spring game. And, the results were encouraging. Jake Rudock looks like he?s ready to take the next step in his development after flashing promise in the first year as a starter in 2013. This was the No. 9 passing attack in the Big Ten last season (197.1 ypg).

3. Work on the offensive line. No doubt, left tackle Brandon Scherff is a stud. Let?s just go ahead and call him the Big Ten?s top offensive lineman. But the unit is breaking in new starters at guard and tackle spots with Conor Boffeli and Brett Van Sloten gone.

4. The secondary has talent that must be honed with safety Tanner Miller and corner B.J. Lowery gone. Desmond King is a cornerstone at one corner spot. Keep an eye on Reese Fleming, Greg Mabin and Sean Draper on the other side. John Lowdermilk is back at one safety slot. Jordan Lomax had his moments in the spring and could be the other. Nico Law also will be a factor.