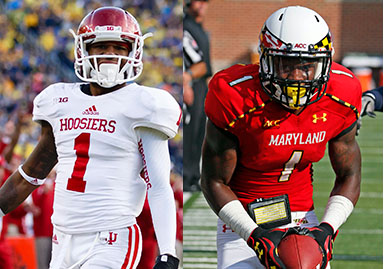 The Big Ten lost a lot of talent at receiver, including, but not limited to, Jared Abbrederis, Corey Brown, Quincy Enunwa, Jeremy Gallon, Cody Latimer and Allen Robinson. With all of that top-flight production gone, which receiver will have the best 2014 season? See BTN.com's Sean Merriman and Brent Yarina's predictions in this post.

Sean Merriman
Stefon Diggs, Maryland. From a pure talent standpoint, Diggs gets my vote for the top wideout in the Big Ten next season, and it really isn't even that close. The only question is, how will Diggs respond after having surgery to repair a broken fibula he suffered last season? When healthy, this is one of the most explosive playmakers not only in the Big Ten, but throughout all of college football. Diggs hauled in 54 catches for 848 yards and six touchdowns during his freshman campaign. He followed that up with 34 catches for 587 yards in his sophomore year, despite missing nearly half the season. This is a guy who has elite speed and can change a game any time the ball is in his hands.

Brent Yarina
Shane Wynn, Indiana. Wynn?s been a very nice weapon in the passing game each of the last two years, and he?s amassed his numbers (114 rec., 1,293 yards, 17 TD) while competing with Cody Latimer, Kofi Hughes and Ted Bolser for looks. All three of those talented options are gone. That doesn't mean Indiana's prolific offense is going to slow down or ignore the pass, though. Whether it's Tre Roberson and/or Nate Sudfeld under center, Wynn is set to receive a lot more opportunities in the Big Ten?s most exciting offense. He could be this year's Jeremy Gallon – maybe even better.