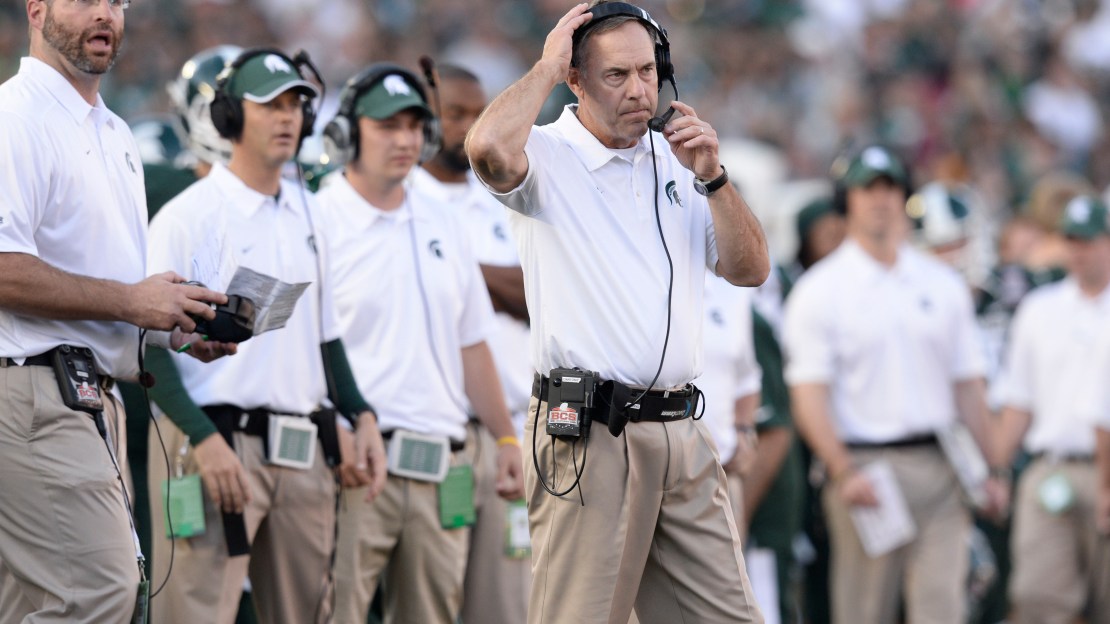 EAST LANSING, Mich. - Those were real, live hits on quarterbacks in today?s Michigan State spring game. What else would you expect from a Spartans program renowned for its toughness?

At one point in the second quarter, quarterback Damion Terry absorbed a wallop that sent him to the sideline. The famed ?Spartan Dawg? defense that roughed up Stanford in the Rose Bowl still has it, in case you were wondering.

This will be the last time we see Michigan State until Aug. 29, when the Spartans open the season playing host to Jacksonville State on a Friday. And, frankly, I?m pretty satisfied with what I saw in what was one of the more game-like spring games I have seen.

Dantonio has a well-oiled machine that?s clicking as well as any program in the Big Ten. Hardware is being added to the trophy case, national praise is on the rise and surely a high preseason national ranking will be unveiled this summer.

But, you know Dantonio doesn?t really care about this stuff. He?s all about the here and now-as well as what?s around the corner. No time to look in the rear view mirror. That may lead to complacency. And Dantonio abhors complacency as much as he does that school in Ann Arbor.

Dantonio had to mostly like what he saw on this October-like day in Spartan Stadium. There were some big strikes down field, hard hits, gadget plays and even some fun provided via a touchdown run by Sparty. In the end, Connor Cook hit tight end Josiah Price with a two-yard touchdown toss with 27 seconds left to lead his White squad to a 20-13 triumph over the Green. But, the final score really wasn?t important. But stuff like this was:

Last spring, Andrew Maxwell looked to have the edge at quarterback. Riley Bullough (Riley Bullough!) was listed by most as the No. 1 running back with Gerald Holmes No. 2. Well, Cook emerged as a sophomore to become a top Big Ten quarterback. And Jeremy Langford busted out a 1,422-yard rushing season with a Big Ten-high 292 carries and 18 rushing scores.

This day wasn?t without its defensive standouts. It was hard not to be impressed by redshirt freshman defensive end Demetrius Cooper, who was the guy who laid the hit on Terry. Cooper is a quick force off the edge, giving MSU a nice fleet of pass rushers that also will include Shilique Calhoun and Marcus Rush. But, these revelations shouldn?t be a surprise.

In recent years, the Big Ten has been about one team?s dominance. From 2005-09, Ohio State won at least a share of the Big Ten. Wisconsin turned the trick from 2010-12. Now, it may be time to embrace the notion that Michigan State has become the ?it? program in the Big Ten. The proof is all there in black-and-white.

The program is rising-literally and figuratively-before our eyes. On this day, Michigan State showed off its sparkling North End Zone expansion project, a $24 million endeavor that will host locker rooms, a recruiting lounge, media center and training room. The two-story, 50,000-square-foot facility will be completed in July 2014.

The Spartans made their first statement in 2010 with an 11-2 mark and tie for first in the Big Ten. Things kept rolling in 2011 with an 11-3 record and trip to the Big Ten title game. After a 7-6 clunker in 2012 that saw the Spartans lose five games by a combined 13 points, Michigan State rebounded to enjoy its best season since 1987 by going 13-1 overall and 8-0 in the Big Ten en route to winning the Rose Bowl and finishing No. 3 in the polls.

That brings us here, on a late-April day in East Lansing dreaming about tomorrow. The Spartans entered today?s spring game needing to answer some questions. The defense has a big hole in the middle with Max Bullough gone. Senior Taiwan Jones is the first man up and has looked good in the spring.

The trench play has been watched all spring. The offensive line was a huge key to success after struggling in 2012. The unit has lost some key components, including guards Dan France and Blake Treadwell and tackle Fou Fonoti. All eyes have been on Kodi Kieler and Connor Kruse. Dennis Finley is a redshirt freshman who has some excited. The d-line has lost Tyler Hoover and Micajah Reynolds. James Kittredge and Joel Heath, among others, have had their moments this spring for a defensive tackle spot that some feel may be Michigan State?s biggest question.

The secondary has some holes with corner Darqueze Dennard and strong safety Isaiah Lewis gone. The staff knows Trae Waynes is the top corner now. Darian Hicks looks like the replacement for Dennard. RJ Williamson is getting pushed by Jalyn Powell at safety. Powell has been a spring star.

Today was about putting another brick on the Michigan State wall that Dantonio is building. This program is hitting its stride. And it will be difficult to dethrone.